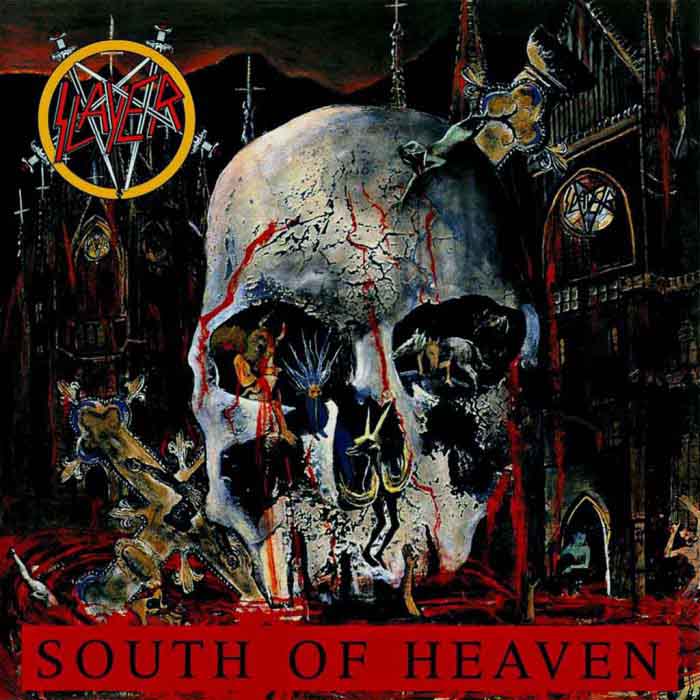 As such, it showed us perfectly where humanity was in the 1980s. We had just defeated what we thought was a great enemy only to find out that the decay was within all along, and that we were down a bad path, and as a result, everything that people think is gold is shit, and everything we encounter in our everyday lives that we told is “good” is in fact evil, or at least a combination of manipulative, incompetent, unrealistic, and insane.

For this reason, Slayer presented ambiguity in the midst of assertive, masculine music. You never knew where Satan would show up, since in the Slayer lexicon, he is a deceiver who leads us to doom, even if understanding Him leads to great wisdom. If this music makes a philosophical statement, it is that we cannot run away from evil but must charge through it to find the concealed good, something appropriately never outlined in Slayer, only silhouetted by the music itself, which has a great zest for life and exuberance.

Having created itself with Show No Mercy, Slayer streamlined the hardcore/metal fusion with Hell Awaits and then backed off a bit toward hardcore territory with Reign in Blood, which aimed more at the pure dynamics of technique. That left one more album in the classic Slayer oeuvre, South of Heaven, which attempted to focus metal more on atmosphere and melody.

We could see Reign in Blood and South of Heaven as, like Master of Puppets, two-way shifts like tectonic plates moving under one another. Reign in Blood fully realized the Slayer style, but took it more toward pure rhythm music, which the band intuited correctly would not make as great an impression as the more melodic, memorable songs — who really thinks much of the tracks between “Angel of Death” and “Raining Blood”? they flow together as a texture — of their earlier works; South of Heaven brought in melody and ambience, following what Slayer innovated on “Necrophiliac” years earlier, but also turned partially toward too much focus on the vocals leading the composition as a rock band would do, paving the way for the mostly-forgettable Seasons in the Abyss.

South of Heaven presaged black metal. Dialing back song structure variation as a technique, it made variations instead particular adaptations to the poetic process of each specific song, and focused more on creating a sonic backdrop to imagination rather than stating explicitly what listeners must heed. This followed the late-1980s powering up of the media with the USA Today effect, the imminent fall of Communism which increased the risk of nuclear war, and the revelation that despite being victorious, our society had become a crossover between Gordon Gekko and Altamont forever.

Thus Slayer created the ultimate nocturnal album, one that was part nightwalk and part dream: an immersion into the subconscious where the last battle lies. What do we seek, coherence and organization, or disorder and very animal expressions of our emptiness? What do we fear, the enemy, or that we have adopted the vision of the enemy? As a wise man once said: Whoever fights monsters should see to it that in the process he does not become a monster. And if you gaze long enough into an abyss, the abyss will gaze back into you.

You can imagine South of Heaven as a trip through the city. It begins with a strong statement of metaphor and mythology, the battle between good and evil where the real evil is in human hearts: “on and on, South of Heaven.” On and on, indeed, on top of a history that shows us every human civilization collapsing through internal conflict, specifically envy and resentment, becoming ressentiment or an impotent self-pity turned outward into consumptive rage.

Then, the hints of what darkness lies within, as “Silent Scream” explores the process of abortion as a simile for how the Boomers treated their children, or this society treats its promising and sensitive members, perhaps. Are conditions that induce suicide merely extended abortion, a killing for the convenience of the ego and its desires, themselves merely a proxy for lack of direction and organization? Well. Then follows some classic Slayer, then “Behind the Crooked Cross” which is a meditation on how good intentions go badly in the hands of ideology, and “Mandatory Suicide,” covering the same topic.

Now the more serious Slayer emerges with “Ghosts of War,” a Moby-Dick level introspection of the futility of human control, and the cynical “Read Between The Lies,” showing Slayer leaving behind its mythopoetic viewpoint and taking a hardcore-style critical view of modern liberal democratic market socialist systems. We all love mythical Slayer, but metaphors unanchored become human projection, so Slayer tent-pegs their symbolism to some realism. This is followed by perhaps my favorite song on the album, “Cleanse the Soul,” which melds medieval purification rituals with an occult sacrifice, a trope which becomes significant when one considers the theme of sacrifice of the good by a system dedicated to symbolism throughout the album. Listen to the cry for eternal truth:

Body that rests before me,
With every dying breath,
Spellbound and gagged,
I commence your flesh to dirt.

Body that lay before me,
In everlasting death.
Entombed in abscess,
To rot and lie stinking in the earth.

Death’s an art, flesh and earth never part,
A power of the mind.
Death shines on the air of silence,
A ritual of endless time.

Purged of your dead body,
Sacrificed of your life.
Unearthly ritual sealed in fire
Enter the kingdom of desire.

The band stop the thought there, for the moment, and pick up a Judas Priest cover with “Dissident Aggressor.” One wonders what this song means, but it seems to also be about the second world war, with military symbolism and the final line, “I know what I am, I’m Berlin.” This complements the earlier “Behind the Crooked Cross” and “Mandatory Suicide,” as if saying goodbye to the failure of our world, and noticing how event attempts to correct it went astray. We are misled by symbols, much as is encoded in the acronym Satan Laughs As You Eternally Rot (SLAYER).

After the Judas Priest cover, the band finishes with “Spill the Blood,” which seems like it continues “Cleanse the Soul” and, per Slayer methodology, forms a bookend to the title track which begins the album. In this song, the protagonist implied seems to have performed the act of Satanic obedience, killing another, and this completes the ritual of sacrifice suggested in “Cleanse the Soul” (a medieval term for torture of the guilty). In translation, it seems that adopting the symbolic way of life, whether Communist, National Socialist, or mainstream society in the late 1980s, leads to being misled by the tempter Satan, our pursuit of immortality through symbol, number, and the tangible leading us to a type of doom.

This heavily autumnal album achieves a dreamstate through its heavy use of fuzzy metaphor over strobing ambient guitars and displaced, almost disconnected percussion, leading us through a doorway into the world of the subconscious. Much like “Blessed Are The Sick” and “Hvis Lyset Tar Oss” would later raise the bar for their respective subgenres, this album showed underground metal its future: probing the darkness in the human mind, and striving for clarity amid all of the misleading but appealing symbols.

Next in this series, some of the albums inspired by South of Heaven and their own take on the nocturnal reaches of the human inner mind.