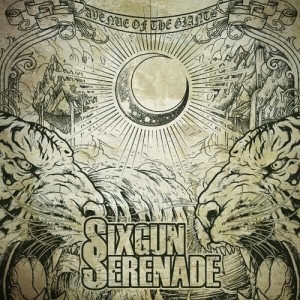 I think the best way to understand the new band from Texas called Sixgun Serenade is that they are a pop band that likes metal riffs. This song features chuggy riffs from speed metal, noodly lead riffs from tek-deth, but otherwise, is pure alternative-rock-tinged pop music which delivers a gratifying melodic hook in a song that knows, like a dancer in the rain, how to pause and when to move. It combines really effective radio pop with some depth, and battering metalcore and metal riffs that keep the pop from swallowing up a realistic sense of how life is struggle.

If you remember the video for “Cemetery Gates” by Pantera, in which the vocalist had a similar hairstyle and tossed the hair in a similar way, and in which the verses were abrasive and the choruses sweetened by melody and soft vocals, the approach here may seem familiar. In fact, you might see it as a nod or tribute to that video, which kicked off the tendency of metal to accept alternative rock sounds and thus make melodic choruses to counterbalance the rage. Here, the battering metalcore/tek-deth aspects of the music are balanced by what would be a highly successful pop band in the chorus.

Obviously, this is not going to be for everyone. Some say metalcore is a contemporary version of glam metal or hard rock, but I think it’s more like a catch-all rock/metal hybrid not unlike Led Zeppelin or Tool. It aims for a rock audience, and hopes to wean them onto metal, or at least metal riffs, and from there to let nature take over. One thing that Sixgun Serenade do well is that they embrace technicality but, unlike many of the truly chaotic core/tek bands, use it wisely. That doesn’t mean selectively exactly, more than they tailor their techniques to the roles in which those techniques complement the song.

Another thing to like about Sixgun Serenade is that they do not indulge in pretense or hide their origins. This is pop music in the best tradition of the MTV era, where each song is designed to be compact, slightly repetitive, hooky and to have some form of song development that parallels what goes on in the video. The result combines silent theatre, language and music and creates a unified entertainment product. Unlike most pop music, however Sixgun Serenade wrap some guitar fireworks and abrupt riffing into their payload.