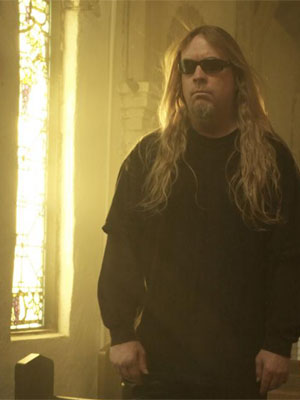 Foundational speed/death metal band Slayer have released a statement including medical information about the death of guitarist Jeff Hanneman, who passed away from liver failure. From the statement, it is unclear whether there is a single cause of this failure, or whether as in many cases moderate alcohol consumption plus medications and stress eventually became fatal.

“We’ve just learned that the official cause of Jeff’s death was alcohol related cirrhosis. While he had his health struggles over the years, including the recent Necrotizing fasciitis infection that devastated his well-being, Jeff and those close to him were not aware of the true extent of his liver condition until the last days of his life. Contrary to some reports, Jeff was not on a transplant list at the time of his passing, or at any time prior to that. In fact, by all accounts, it appeared that he had been improving – he was excited and looking forward to working on a new record,” said the band on a posting to internet data dump Facebook.

Luckily, it seems as if this was a rather sudden affliction and did not involve long and boring suffering. However, as he had been improving and getting ready to work on more Slayer material, it doesn’t sound like alcohol was the only factor here. Rather, it seems like poor health and medical stress may have contributed to this condition, which then lay dormant until it could ambush. The band also released a lengthy statement of reminiscences as they struggle to say goodbye to their founding member, collaborator and friend:

KERRY: “I had so many great times with Jeff… in the early days when we were out on the road, he and I were the night owls, we would stay up all night on the bus, just hanging out, talking, watching movies… World War II movies, horror movies, we watched “Full Metal Jacket” so many times, we could practically recite all of the dialogue.”

TOM: “When we first formed Slayer, we used to rehearse all the time, religiously, 24/7. Jeff and I spent a lot of time hanging out together, he lived in my father’s garage which was also our rehearsal space. When he got his own apartment, he had an 8-track and I would go there to record songs I’d written, not Slayer songs, other stuff I’d written. At a certain point, you still have the band but you start your own lives outside of the band, so that 24/7 falls to the side, you don’t spend as much time together as you once did. I miss those early days.”

KERRY: “He was a gigantic World War II buff, his father served in that war, so when Slayer played Russia for the first time – I think it was 1998 – Jeff and I went to one of Moscow’s military museums. I’ll never forget him walking around that place, looking at all of the tanks, weapons and other exhibits. He was like a kid on Christmas morning. But that was Jeff’s thing, he knew so much about WW II history, he could have taught it in school.”

TOM: “We were in New York recording South of Heaven. Jeff and I were at the hotel and we had to get to the studio – I think it was called Chung King, a real rundown place. So we left the hotel and decided to walk, but then it started raining. We walked maybe five blocks, and it was raining so hard, we were totally soaked, so we decided to get a cab. Here we are, two dudes with long hair and leather jackets, absolutely soaked, thumbing to the studio. No one would stop. We had to walk the entire way.”

TOM: “Jeff was a lifeline of Slayer, he wrote so many of the songs that the band will always be known for. He had a good heart, he was a good guy.”

The band also announced that there will be a celebration of Hanneman’s life “later this month” and that along with family and friends, the public will be invited to attend.

6 thoughts on “Slayer release cause of death for Jeff Hanneman, memories of their time with him”