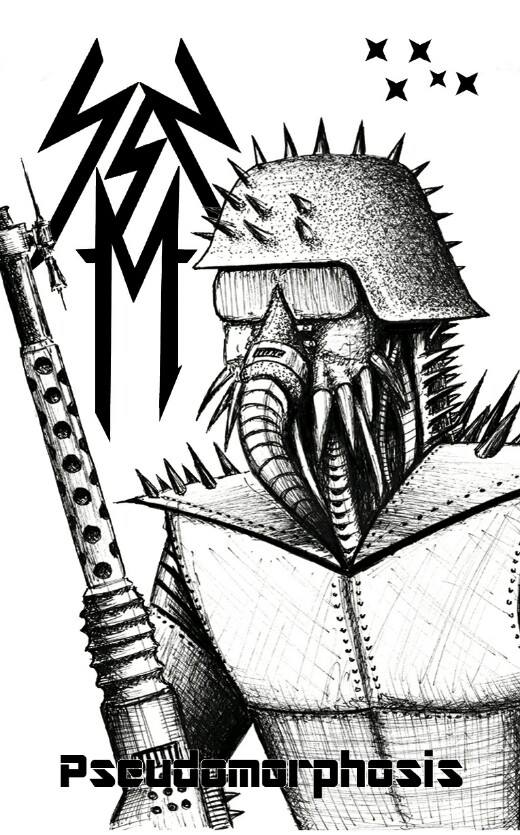 On October 3rd, Iron Bonehead Productions is proud to present the debut recording of New Zealand’s Solar Mass, Pseudomorphosis, first to be presented on cassette tape and then 12″ MLP and CD later on. Just as a prehistoric universe exploded into being like a hellstorm of raging chaos, so, too, the sounds of Solar Mass leap into existence in the present era before you with five new songs in random acts of ferocious violence across a broad spectrum of subgenres to escape the mediocrity of the governing Magian death-cult. Listen as the Faustian aristocracy announce a declaration of war and leads a counter-attack to reclaim the right to metallic existence. Hear the atomic warlords impose a new epoch, a nascent culture on a dying world swamped with obsolete low-tek assets resembling mindless automatons managed by the invisible hand of media moguls and alien usurpers. Bear witness to the war cry, the four-string fog-horns of doom, the clanging of metal armor, the rattle of sabre-lazers, and the sound of air-raid sirens screaming across the fire-lit crimson skies into night’s dawn as the mechanized battalion marches with savage brutality and cutting-edge technology towards the nuclear horizons of the future.

A deafening roar from the tomb of Diocletian asserts dominance over the cowering effeminate indie and lowbrow radio-wave slaves, to relinquish and thwart the encroaching vanguard of invading subcontinental simian hominids. See how, in their confusion and fear, the label-stables huddle together, seeking shelter and refuge in the subterranean sewers of pop music, hiding from the six-string extermination squads sent in to ethnically cleanse the inferior mongoloids under a reign of bombastic fire from overhead atomic cannons, an aural pogrom set in motion as a consequence of fashion’s own making, a cataclysm repaid in kind for their criminal psychopathic altruism of which they have committed with impunity against the music world. So begins an assault and a long, cold nuclear winter for the subhuman to endure as deadly amplifiers detonate like one billion megatons of TNT to stamp out their miserable campfires, breaking their linked hands and murdering their “Kumbaya” mantras, smashing their acoustic guitars over their befuddled heads, snuffing their dreams of an egalitarian planet. Watch as their pop-stars are mercilessly extinguished for singing hymns to a third world from the sun. Lift up your chalice and quaff the toxic heavy metal which overflows like a sonic shockwave into the deepest recesses of the eternal space drama. Toast, if you will, the good fight against immeasurable odds in the timeless face of a seemingly inevitable order of death: Solar Mass’ Pseudomorphosis! Hear the first nuclear detonation with the track “Weaponised” at Iron Bonehead’s Soundcloud HERE. Cover art – by Rok of Sadistik Exekution infamy – and tracklisting are as follows: