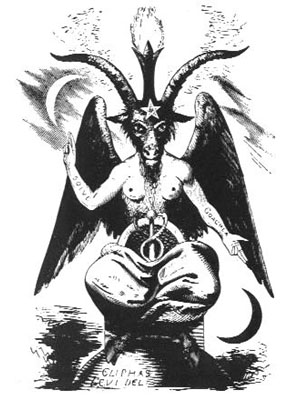 Recently we published an account of how a Christian “black metal” band was attacked by fans who resented the encroachment of propaganda against evil into the devil’s music.

As many acknowledge, metal is very much the devil’s music. It is obsessed with social rejection, the occult, the power of nature, warfare, death, killing, disease, horror and ancient ways.

When you pick up your average heavy metal record, it is the exact opposite of the message of good, which is that we can make a perfect society where raw power doesn’t rule and where everyone is accepted.

In the world of metal, all the best laid plans of mice and men go awry in the worst possible ways. There is no perfection to society, or humankind. It is warfare and predation, red in tooth and claw, fighting it out to the end.

For this reason, metal has exhibited a fascination with Satan since its earliest days. Where the blues showed a belief in Satan’s power to help individuals, metal went elsewhere and portrayed Satan as an active metaphysical force affecting us all. As time went on, that viewpoint went from fearful (“War Pigs”) to an outright endorsement.

As one writer noted:

He asked me if I worshipped “the Devil,” looking at my iPod’s screen, where the gloriously disgusting cover of Cannibal Corpse’s The Wretched Spawn was displayed…

After shooting him a sideways glance that I hoped would be conveyed as Satanic, I thoughtfully sipped my Jack Daniels. Then I leaned in closely, asked if my black nail polish gave me away, and added that, duh, everyone who listens to metal — especially chicks –practice secret Satanic rituals that work best with the blood of an unsuspecting male. – “Is Heavy Metal Really The Devil’s Music?” by Lauren Wise, Phoenix New Times, July 23, 2012

The article goes on to have a balanced view of the metal equation, in which some newer material that is pro-Jesus gets some airplay. However, the lingering question remains… isn’t the majority of metal evil? Doesn’t the exception prove the rule?

To that end, we present the most blasphemous metal we can assemble so that you, too, might enjoy the blessings of evil:

Back in the 1980s, when Tipper Gore and her big-hair people ruled the censorship committees, this song seemed designed to fit into their worst fantasies. Its lyrics read like a Satanic ritual and its sound dwarfed anything else on the record store shelf.

Beherit – Lord of Shadows and Goldenwood

This album opens with a recited text from the Church of Satan, and then launches into some of the most primitive and evil-sounding metal ever created. This particular song hails the dark lord in a manner that by being mystical and metaphorical is almost more threatening than direct assaults.

Three proto-black metal bands founded the genre: Bathory, Sodom and Hellhammer. Slayer gets some credit for technique as well, bypassing Venom who were fundamentally a heavy metal band and not really black metal in any distinctive way. Of these, Hellhammer came up with the best tribute to Satan ever invented. Obey the ritual!

Darkthrone – In the Shadow of the Horns

No list would be complete without the band who inscribed “As Wolves Among Sheep We Have Wandered” and “Darkthrone is for all the evil in man” on their early albums and claimed to be the most hated band in the world. One of the best bands in the world, if you ask me, and filled with delicious hatred for goodness.

If you are curious as to what it will sound like when Satan takes possession of earth, this song should tell you. Occult lyrics combine with a sound like an ineffable mechanical devourment of earth itself by forces opposed to all goodness and beauty.

We could write several articles about which Deicide albums or songs are the most blasphemous, but it really is splitting hairs. From their eponymous debut to their last great album, Once Upon the Cross, this band blasted Jesus with hatred and mocked God, proclaiming Satan’s order on earth. The only reason they might not be qualified as evil is that they probably drove hordes of people to church in horror.

The Satanic Skinheads from Ross Bay brought us this disturbed homage to Satan and evil ritual. You can imagine a cemetery desecration and the broken wings of angels scattered across a dystopian wasteland, while elegant fragments of music from a more orderly time fade out on the toxic wind.

This song smashes the idea of a pleasant afterlife with its image of eternal death. Although it does not mention God, Jesus, angels, etc. by name, it does refute the theories of these notions with a darker and more unforgiving concept.

Apocalyptic evil emerges in this song that sounds like an air raid alarm being played over the chants of those who would destroy this world for Satan. Possibly one of the most minimalistic black metal bands ever, Von influenced others with its droning call to blasphemy.

Hypocrisy – God is a Lie

Threatening to choke the life out of God with their own hands, Sweden’s Hypocrisy launched into a tirade of righteous anger that has few comparisons in the world of music. This is the wrath of anti-god and it affirms that metal truly is the devil’s music.

Samael – Into the Pentagram

Named after a demon whose name is supposedly the key that unlocks the death of God, Swiss evil metal slingers Samael unleashed a torrent of occult and mystical works that refute the Bible and the best wishes of its minions. This particular track seemed custom-cut to delight those who relish apostasy.

Unleashed – For They Shall be Slain

No list of blasphemies in metal would be complete without this Viking explanation of how the Christian invaders must be destroyed and cut down where they stand. This is blasphemous, but more importantly, it’s a call to war that many heeded and still more are appreciating.

No assault on God would be complete without a litany of the sins of the Christians and the philosophical crisis brought on by dualistic monotheism. In this short hymn, murderer and fervent anarcho-nationalist Varg Vikernes encourages us to remember how Christianity displaced knowledge into symbols and cut out actual experience of life. It’s less rage and more an unsettling sense of deep opposition.

Sounding like rebel angels who picked up instruments casually scattered around Hell in order to wax lyrical about the joys of evil, Havohej oppose all that religion and good bring with it. I vomit on God’s child!

…and last but not least…

Bathory – The Return of Darkness and Evil

Not many people understand the profundity of this song’s undoing of the Revolution that brought us goodness and light. It posits a world outside the well-intentioned order of the church and its humanist allies in which predation, war and violence rule the day instead of morality. After a millennium of trying for Utopia and creating dystopia, Bathory argues, we should return to the primitive ways before consciousness of morality, as those had better results. Unsettling.

What to take away from this all?

First, metal is the devil’s music. Even if you were Christian, like Slayer’s Tom Araya, you would want to make music that sounded evil and opposed the do-gooder notion of a moral order. Metal is not protest music, but it is discontent music, and discontent of a type that affirms all the fears humans have of life outside our social and moral order.

Next, Satan has some killer tunes.

Finally, it makes sense to look at metal in a historical context. See if the following description makes any sense to you:

Romantic poets cultivated individualism, reverence for the natural world, idealism, physical and emotional passion, and an interest in the mystic and supernatural. Romantics set themselves in opposition to the order and rationality of classical and neoclassical artistic precepts to embrace freedom and revolution in their art and politics. – “A Brief Guide to Romanticism” by the Academy of American Poets

Many of the themes that rock throughout metal would be at home in Coleridge, Blake, Milton, Goethe and Wordsworth. Like Romantic poets, metal struggles with the new world order that came about in the 1700s based on the Enlightenment. In this order, the morality of the herd was at its full power and it used the Church as its shield and justification.

And like metal, they rebelled against it then, much as blasphemy echoes the halls of rock now when metalheads compose their micro-symphonies to Satan and hymns of praise for evil.

18 thoughts on “The most blasphemous devil metal”