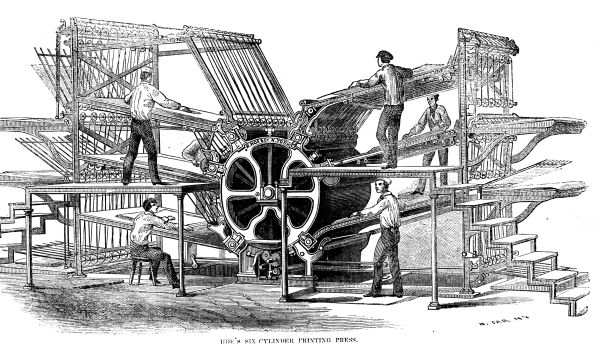 People say what they hope will be true and the grand visions printed about the internet back in the 90s are no exception. While most of us were hoping for Neuromancer on our home computers, more “mature” people saw the internet as an emerging market. They cynically promised as a new age where anyone could publish to the internet. It would be a new age free of domination by big media and a marketplace of ideas, they said.

Fast-forward to the time when those predictions would have come true and we see a far different reality. Information overload renders the internet mostly useless. With so many sites dumping information on the masses, the ones that succeed are the ones who get mentioned in the traditional media. Thus in metal media, the big internet sites are dependent on label money. Labels advertise, sites repeat, then that gets quoted in advertising and the audience, figuring the site must be a big deal, flocks to it.

This means that the big metal sites have exactly the same problems big media did back in the 1980s. If a band is good but not popular with a huge spectrum of people and thus high-margin profitable, it doesn’t get mentioned. We’re right back where we were before the internet, except information overload makes it even harder to find the information of real importance, which is focus on the good metal bands whether vastly popular or not.

As I observed in a review of a rising zine, the days of big internet media are giving way to the return of zines:

Most people had a problem with this. After all, it’s one lone guy screaming at the last 20 years of media consultant wisdom. But sometimes nature favors the brave (and correct) and so this idea is gaining traction. Witness this recent piece by Marc Andreesen, one of the authors of NCSA Mosaic (Mozilla Firefox’s great-grandfather) and now a venture capitalist in Silicon Valley:

On the Internet, there’s no limit to the number of outlets or voices in the news chorus. So quality can easily coexist with crap. All can thrive in their respective markets—and there’s a market for garbage, too. The good news is this: The more noise, confusion and crap, the more the need for trusted guides, respected experts and quality brands.

The vital sentence there is: The more noise, confusion and crap, the more the need for trusted guides, respected experts and quality brands.

What this points to is a resurgence in zines and niche/specialty websites that are not sponsored by labels or media. Those represent the true promise of both the internet and the DIY publishing revolution that launched zines back in the 60s and 70s. Even more, it points to a “singularity” where the internet is recognized as not being what it was sold as, and consumers retreat except for a relatively small group of people who inhabit the net like nerds (4chan, NWN/FMP, Facebook).

After all, the internet is in trouble because time is revealing its advertising model to be bogus metrics based on warm bodies instead of actual attention by people with the ability to buy. More than half of online video ads are not seen, and A small group of people account for most of the activity on the internet which means that advertising is pitching to this group, not buyers, which is one reason why internet advertising continues to have dubious results. Users hate it and it’s easy to ignore.

One possibility is that like many industries before it, the metal industry is flush with cash and has more coming in if it just keeps shipping product regardless of quality. Thus a bubble has been created where money is going toward strategies that don’t actually work or only work with a limited or captive audience. This bubble produces a disconnect between the audience the labels and blogs see, and the larger audience of real-life (“IRL”) people who actually enjoy this music and will buy it — if someone points them to the quality stuff, not just whatever crap the labels are pushing this week.

All of this means that zines have an expanding audience before them. People want experts. Metal zines that are writing consistent reviews that sort good from bad on the basis of the music alone, and that don’t follow the underground trends that are the parallel equivalent of the big label propaganda, will be in high demand. My guess is that they will abandon most of the “underground-style” aesthetic and streamline it into something more reproducible, and focus on more issues at lower cost rather than big ornate rarities.

For metal, this means great opportunity. Metal thrives where it is highly selective. This is because it is easy to make metal, but hard to make good metal. Further, unlike “pure music” genres like jazz and fusion, metal is highly content-driven. This means that songs must imitate and explicate some phenomenon found in the world or in our minds, and thus must be more poetic than the simple jams of other bands. All of this means that we need more of those “trusted guides” in metal than are currently being offered.

3 thoughts on “Why zines are coming back big time”