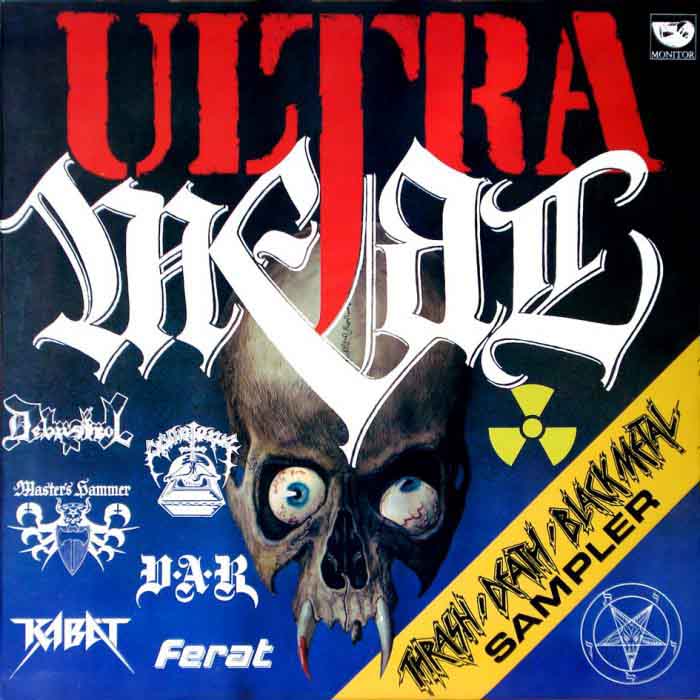 For most of us Westerners, Eastern European metal is something that went on in the periphery without making much of a lasting impression on the genre’s main historic trajectory. As much as this stance may hold a certain degree of truth, there were some notable exceptions to the rule. Countries like Hungary, Poland and especially Czechoslovakia spawned some truly unique artists, whose creativity and determination were strengthened rather than hampered by the relative isolation imposed by the Iron Curtain. Now, enough with the contextual rant, let’s do a brief rundown of the tracks.

Taking cues from the shorter hardcore-tinged numbers on Slayer’s Reign in Blood, Debustrol build songs out of whip-strummed chromatic lines underscored by frenetic percussion. Not a bad opener for the compilation, with some proper nihilism at work. But at the end of the day, NO ONE beats Slayer at their own game. Especially the leads lack the chaotic yet expressive qualities provided by King/Hanneman.

Similar to the previous Debustrol-track, but weaker. The flow keeps getting interrupted by unwarranted stop/start breakdowns and there’s too much repetition in structure. The punk-styled chorus doesn’t help either.

“Techno-thrash” in the vein of mid-period Coroner and Artillery (the vocalist sounds a lot like Artillery’s Flemming Rönsdorf). Angular riffs and ringing dissonance colliding with straight pedal-point strumming and speed metal gallops. While competent, it’s too derivative to make any lasting impression and also fails to escape predictability. At least there’s an urgency to it which might appeal to fans of the style.

Less Coroner and more mosh + self-indulgent buffoonery. The gang-shouted “Don’t fuck me” chorus tells us that this can only be the product of a non-native English speaker. Or was the whole song in Czech? Who cares.

Anyone still reading? Here things are finally starting to get interesting. Moriorr tap into the primitive, Hellhammer-influenced proto-death/black that had begun to boil in Czechoslovakia. A simple guitar figure opens the song, eventually joined by a second guitar that whips up an ominous staccato at a quicker pace. The vocals then enter, surprising the listener with sounding not at all unlike Atilla Csihar of Tormentor/Mayhem-fame. The song then proceeds to an ever slower pace in the dreary “chorus” – the antithesis of a conventional climax. Atmosphere thickens as the band launches into the centerpiece section, where the percussion, chordings and vocal performance bear the mark of what was later to come out of Norway. Coincidence or not? Either way, it’s definitely the best song presented on the compilation so far. It also nails the derelict vibe emblematic of all great Eastern-European metal.

“Vendeta” retains the brute simplicity of “Termonukleárni Jatka”, but brings to the table a typical underground metal approach to multi-part linear songwriting. Each part segues naturally into the next, as if presenting a horrible and unavoidable fate. Spooky keyboard/organ-work pours on another layer of atmosphere. Highly recommended for Root-heads and proto-black metal historians.

Ah yes, the inimitable Master’s Hammer with one of their finest works in a rendition exclusive to this compilation. The haunting, folk-tinged melody that opens the song is one of the classics of the genre. Built out of two contrasting, but complementing parts – the first of which centers on rhythmic picking of one single note and the other undulating between half/whole-steps in static rhythm – underscored by ceremonial drums will stick in the mind for the rest of your life. The melody is repeated with slight variations, backed by keyboard in a tasteful, non-obtrusive manner. To ensure the listener not falling into a comfortable lull, pierced screams fill the air with unease. Just as a trance-like state is about to ensue, it is effectively broken by blunt riffing and blast-beats. The contrast achieved could be likened to pertaining some sort of pagan ritual and suddenly realizing you’re the sacrificial object. While there are obvious references to the classic works in heavy- and speed metal, there’s something qualitatively different at work here in terms of composition, atmosphere and general approach. This could very well be one of the earliest examples of black metal proper.

“Géniové” doubles down on intensity in favor of brooding majesty. Slow chord progression opens up space for melody to take the helm and produce an epic of early black metal. It’s unavoidable to write a piece on Master’s Hammer without mentioning the singular vocals of František “Franta” Štorm. Czech language is perfect for black metal, but his method of seemingly inhaling rather than exhaling his vocal lines just takes it to the next level. Like “Zapálli Jsme Onen Svět”, this track would also end up on the band’s seminal Ritual-album in slightly modified form.

The first and only band on the compilation to sing in only in English, Ferat is also the most conventional sounding band of the lot. It’s basically Kreator’s Extreme Aggression with Czech vocals. Tight, competent and completely forgettable.

Here, V.A.R. let go of the reins completely, throwing in all sorts of junk with little correlation between individual parts. File under failed experiments, although I’ll give them the honor of being a more fun listen then Ferat and Kabát.

Like a microcosm of metal at large, Ultra Metal accommodates a small cadre of excellent artists buried underneath heaps of bland or poorly conceived music. Still, the joy of finding the golden grains is worth the trouble ten times over. Since this compilation was released in relatively large quantities it became one of the main points of entry to the Czech scene for the rest of the world – including this author. It might be worth entertaining the thought that this was only the case for certain Norwegian musicians, but now we’re heading into speculative territories. Either way, Ultra Metal is worth looking up just to hear the Master’s Hammer tracks and contemplate on the correlation between early Czech black metal and the so-called second wave. Also worth mentioning is the goofy layout and band photos provided by Franta Štorm.