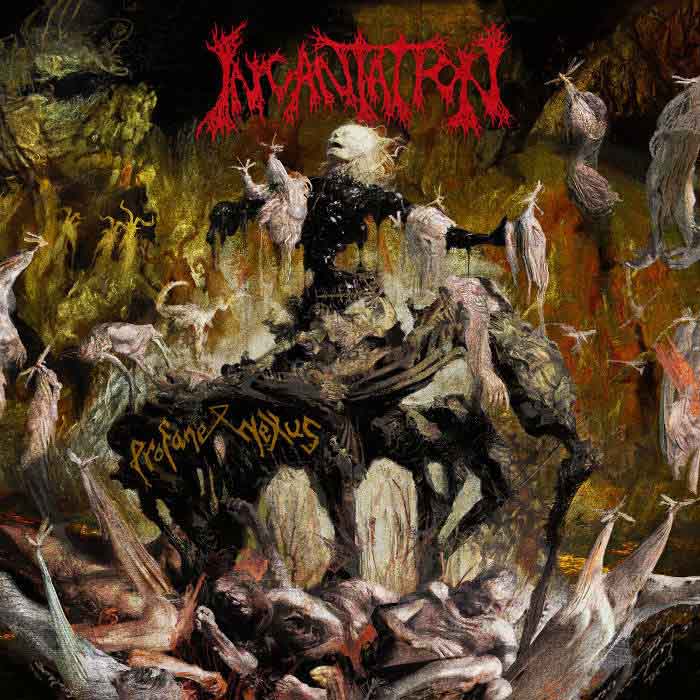 Incantation rehash past riff phrases of theirs into drawn out, incredibly boring heavy, speed, and doom metal tracks on Profane Nexus.

A once legendary band has regressed down to the level of their cargo cult imitators: typical “caverncore” type bands that Dark Descent Records frequently releases. Tracks on Profane Nexus are defined by generic riffs extremely reminiscent of ones on prior Incantation records. Sometimes Incantation will even use a prior riff as a hook like a pop song in a song where the defining riff is some generic short finger fill that would be typically be spontaneously played while a guitarist is practicing.

Riff phrasing and variations on Profane Nexus are non-existent or droning to point of listeners zoning out. Incantation have even lost the speed metal phrasing and song structures present on Dirges of Elysium. Rather on Profane Nexus, they are mostly applying a extremely simplified version of speed metal riff phrasing to horrifically boring heavy and doom metal riffs, playing the rhythm riff (that in speed metal would be a triplet) and using the fills (usually chords in speed metal) as phrases of an “extended” melody, here extremely retarded and non-descript.

Profane Nexus has no reason to exist other than as a phoned-in attempt to sell the three actually good Incantation albums and The Forsaken Mourning of Angelic Anguish EP released by Relapse Records while presenting Incantation touring opportunities. The only identifiable way in which Profane Nexus is even an Incantation album is from the hooks stolen from prior, better Incantation tracks and stuck in the type of mediocre speed metal song forms that led to glam and hard rock sellouts in the eighties. Megadeth is Mozart compared to this. On Profane Nexus, Incantation never even attempt to forge heavy metal phrases into flowing tremolo melodies in deep, explosive chromatic compositions as on Onward to Golgotha.