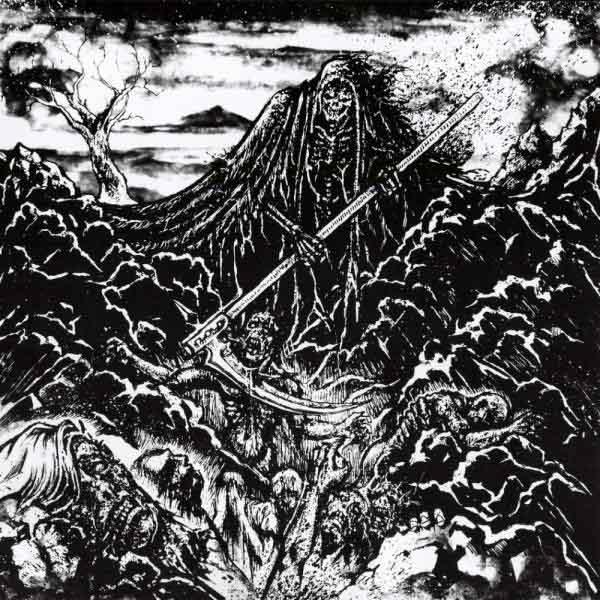 The Infamous side of the split consists of three relatively long compositions performed in the raw yet melodic style unique to this band. Having released one full length and four split albums in less than a year prior to this release, Infamous mainman S.A. seem to be possessed by a creative fervor matched by few. For most musicians such a high release-rate would probably result in some form of stagnation or artistic petrification, but there are no signs of lethargy, compromise, or lack of ideas to be found here.

Infamous developed an instantly recognizable style that upholds the high compositional, performative and spiritual ideals as formulated by the classic Norwegian black metal bands in the first half of the 1990s without coming off as a derivative. A hardcore punk influence –- loosely related to the punk/black metal hybrids of Absurd and Ildjarn -– can be heard in percussive and melodic patterns throughout the Infamous catalogue. S.A. highlights and synthesizes the sense of old-world melody prevalent in black metal and Oi!/RAC music, creating a romantic and immersive sound similar in expression to Graveland twenty years ago.

What ultimately separates this band from its contemporaries is the idiosyncratic melodic language that defines the compositions. As pointed out in earlier DMU reviews, the melodies are often on the sentimental side. However, the melodic parts avoid the risk of being burdened by the tedious emotional reactions often associated with such a mindset as they are ingeniously layered and performed in a brutally honest and direct manner. By juxtaposing the guitars against a harsh backdrop of heavily distorted and reverbed drums the music as whole produces a sonic sensation which could be likened to a soldier catching a glimpse of eternity amidst the horror and destruction of a raging battlefield.

All three songs are exquisitely structured without coming off as forced or stale. The first track (“The Return Of Misery”) stands out to this reviewer as one of S.A.’s finest compositions, propelled by grievous yet beautiful melodies but even more enhanced through the total effect accomplished through careful sequencing and layering of the individual song components. In rough terms, the song could be described as an extended variant of the underground metal method of writing interlocked riff-sequences or cycles, where each new part relates to the previous one in a meaningful way, producing a form of musical narrative.

What differs with “The Return To Misery” is that the song is framed in both ends with an identical riff which at first appearance seem somewhat arbitrary in relation to the major themes of the song. It deviates from its immediate surroundings in regard to style and by being far more explicitly blunt and grim than the lush yet sorrowful riff sequence of the mid-section. However, when the seemingly redundant introductory riff returns at the end of the song it is experienced differently since the music of the middle section has altered the mood and mindset of the listener. This revelation produces a sense of elevated perception which brings to mind the experience gained after having embarked on a challenging journey or quest. The story begins and ends at point A, but what happened at point B (and C, D, etc.) allows the subject to perceive the all too familiar point A in a new light.

The Gratzug half of the split is something of an anti-climax. Apparently, Gratzug liked the lead guitars of Burzum‘s “Key To The Gate” and Forgotten Woods’ “Eclipsed” so much that they deemed it necessary to write droning songs with simple melodic progressions. Not surprisingly, this method fails and it becomes quite a chore to uphold any degree of attention for the rest of the playing time.

As a result, this album produces an uneven listening experience, with a descent into the complexity of Infamous followed by a washing drone from Gratzug. However, this album is worth tracking down just to hear some of the best individual riffs and compositions produced by Infamous so far. And keep an eye out because the first fifty copies of the special edition comes with skeletal parts, so act fast!