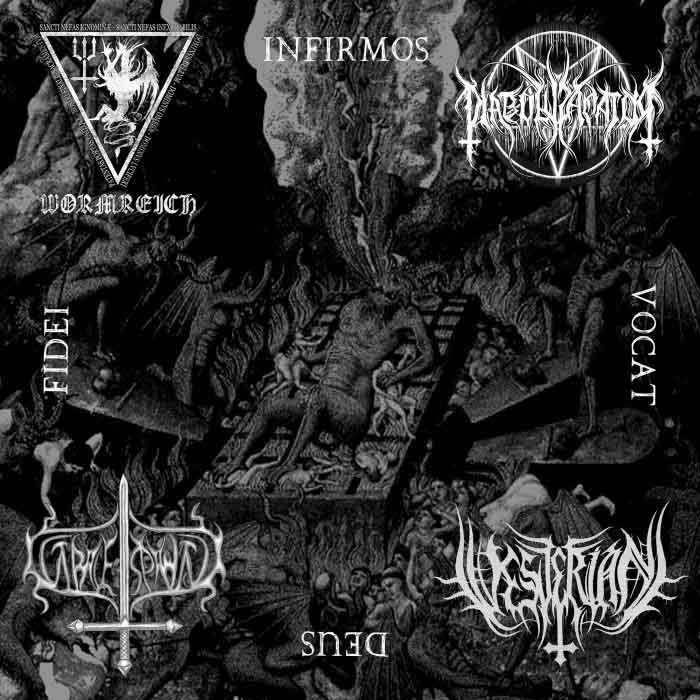 This is a split with contributions from four different bands, each of which present three full recordings, making the release altogether rich and diverse. Most, if not all, of the tracks sound under produced, which is a good thing when the listener wants to dig into the real bones of the band, undistracted by the direct impression of “great sound.” While none of the bands here is particularly original, or even possessing a clear line of musical development, the split is enjoyable as a forcefully elaborate underground effort to develop expression within the modern black metal (actual black metal, that is) context.

As a sideways comment, while the author recognizes, commends and is in fact looking forward to future efforts from some of the involved North American bands participating in present release, the few perspicacious readers are given a hint to search for and explore the elusive, but present, South American satanic black metal releases of the new millenium. The latter spawn a higher take on European “raw” black metal, that is phrasal and terrorific in character, while avoiding the un-musical pandering of Deathspell Omega. To be fair, however,  Wormreich somehow channeled Deathspell Omega’s sound into actual musical flow in their Wormcult Revelations (2014).

The following are comments in order of their apparition on the split:

There is a vague consistency in way of style between each of the three tracks pulling in slightly different, separate ways. The influence of Deathspell Omega is harnessed so that instead of having a mist of nothingness and noise, the ambient-like effects preferred by the famous band are used within and in between clearly delineated melodic shapes, creating a flow within which the deathspellisms serve as punctuation marks or even impulse-arresting devices. The band may at times rely too much on the effect of their highly expressive ideas, and so forget to give due attention to the overall movement of the song so that a complete “narrative” takes place. The third song shows both unprecedented beauty and grandiosity but, at the same time, a falling into airy chords lacking melodic content, and therefore lacking the fortitude of phrasal expression, and so the whole piece sounds like a placeholder for a synth-chorus which does display the phrasal quality that would see the rest of the music attain greater overall consistency.

The corresponding three songs by Diabolus Amator are by far the shortest, and their musical content is virtually null. These are noises, which first take the character of ominous chords without a background, then transition to a clearly war metal take on meaningless tremolo-picked barrages. These are interspersed with some “modern hard rock” styled power chord statements. At best, these three tracks sound like creative, though uncontrolled, effusions of a band improvising in the rehearsal room with anything that comes to mind. At worst, they display an incorrigibly feeble grasp of musical composition. The three songs by the band are not really worth anything, although one might imagine one or two individual ideas might be salvaged to actually write music.

Gravespawn’s riffs are mostly made from melodic strings of different lengths which rely on rhythm for completion (indicating the need for revision and improvement). The bass is clearly audible and at times may diverge from what the two guitars are doing. In its sometimes happy-dancy arrangements encapsuled within a nonchalant take on black metal verging on heavy metal, it is difficult not to think about Grand Belial’s Key. However, in Gravespawn’s favor, their control and balance of guitars and bass, as well as their measured use of synths, afford these three tracks a more pleasing, time-worthy listen. A common problem shared with many black metal bands, is that Gravespawn does not seem to be able to take its compositions beyond the “exposition” stage: there is no development noticeable, and there certainly is no satisfying concluding finale.  The characteristic problem is perhaps that there is a greater emphasis on sounding grim “Evil” and tongue-in-cheek —but serious and trve— rather than on writing music that is lasting.

Now, here we have a follower of the Transilvanian Hunger craze that devolves into war metal techniques when they are at a loss as to how to connect the “chilling” Darkthronisms over electronic-music beats. Praise for Vesterian comes in the context of their slight developmental superiority to the other bands in this four-way split: Vesterian songs actually have development sections, but underwhelming retransitions into annoyingly repetitive (because we heard the riff many times before during the song) conclusions. While at times, especially during the third track, one could sense a connection to some of the deathspellisms of Wormreich, and thence some melodic inclings that could, perhaps, be useful, this is still inconsequential, unremarkable and utterly forgettable music.