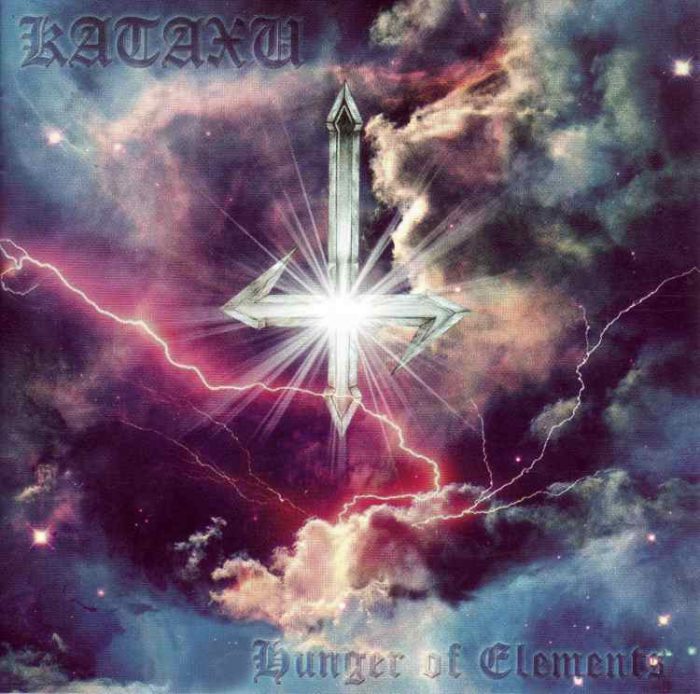 Kataxu play a style of black metal in which the keyboards appear to lead, while the guitars follow a complementary role that enhances and sustains. In maintaining activity in the melodic movement of the phrases, and a distinct harmonic progression between sections, Kataxu avoids relaxing on the guitar riffs avoiding a meandering feeling that is common to bands utilizing this type of approach. Guitars in distorted power chords are always behind the keyboards in the mix, but are given prominence in between sections or in certain passages in ways that enrich textural variety accross the pieces. Percussion is ever present, but one can rather sense their bulk in the spectrume, rather than actually hear drum patterns.

Having released a now-legendary demo, apart from a few lesser though by no means uninteresting releases, Kataxu brought the ultimate vision of the project to fruition in Hunger of Elements. Majestic landscapes that are only hinted at in other “symphonic” black metal works are here delved into and expanded into tangible spaces thoroughly savoured. Mist, mountain shadow and dark earth come to mind in clear images of granular detail, as the keyboard work of the composer layers and explores different directions and sound materials. These explorations, moreover, are always directed at the idea, and are never introduced for the sensory satisfaction of a mediocre ear.

Sometimes the guitar arpeggiates in a clearer tone, which is unexpected but tolerable in that it is clearly a transitional device that assuages the relatively aggressive pace of the music. In each and every case, we see textures and patterns deviate our attention ever so slightly, while the vocal delivery helps ground us back to the darker, harsher side of the music, casting a spell over our eyes penetrated only by the celestial sounds of the keyboard. The final alliance of apparent opposites is possible because the arrangement of notes always lends a balancing tone; the keyboard in particular avoids mundane voicings that would inevitably destroy the otherworldly yet incredibly tangible aura.

The most notable weakness in Kataxu’s music here is the guitarwork, which, while adequate and full in its function, could have elevated the present album to the level of a classic. Without having to be a guitar virtuoso, we could have seen more of a contrapuntal relation between the guitars and the keyboards. Making the two instruments merely mirror each other in their respective ways of expression creates a richly textured space, to be sure, but the opportunity is missed to introduce content that elaborates in detail. The sharp sound of a distorted guitar has the advantage of being able to cut through when used with eloquent impetus in the formulation of long and descriptive phrases. Such phrases are the most exalted element of black metal music, when well-balanced in their timeliness for changes in direction, and in their sensitive molding of contours. Unfortunately, this artistry is missing from this music, leaving the admittedly talented keyboard work to carry the whole weight.

As a whole, Hunger of Elements succeeds in presenting coherent, fluid and capable music despite its shortcomings in concretizing idea into narrative. But obfuscating the final resting place where the listener is taken can have the effect of augmenting the mystery, something that benefits the artwork in question. Hence, this is a work primarily of exhaltation and wonder in the face of nature and a presentiment of its occult workings. A praise that cannot be denied Kataxu is the uncanny ability it has to translate atmospheric premonitions into actualized elaborations. What we mourne is that we will never know where these paths through summoned worlds would have taken us to if the compositions would have been developed into a final breaching of the veil…