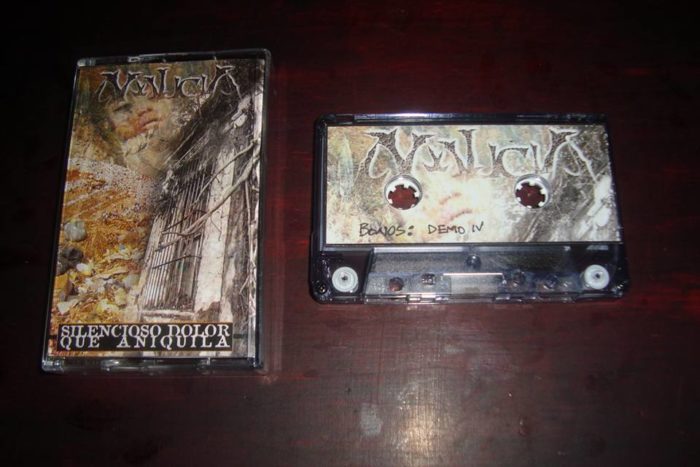 Sandwiched between keyboard compositions which attempt to sound random while hiding a simple progression in notes that initially seem like tangential harmony, Silencioso Dolor Que Aniquila consists of moderately successful compositions using the language of Hellhammer but a sensibility more like a late speed metal band.

Allusions to early Sodom, Mayhem and Carbonized serve as transitions from very familiar riff forms which are designed to repeat a rhythm trope and then take it away into a cloud of melodic implication. This is never realized; it would be a stretch to say that these are more than placeholders for and implications of melody, but they create a delightful suspension of disbelief and sense of the otherworldly even in the midst of primitive strobing riffs.

Driven mostly by pure rhythm, riffs recombine into somewhat idiosyncratic compositions that, like Hellhammer, emphasize pure drone and noise as much as solidity of music, like a transition between mathematics, language and dream. Although the Sodom influence is heavy in the songwriting, songs do not break rhythm, but keep surging forward like mid-period black metal.

Perhaps Malicia belongs as a local band, and not among the greats, but this release is enjoyable nonetheless. Its honesty and simple appeal pair nicely with the sensation that there may be more there, and really that is what the band wants, merely to contrast it with the cudgel-like immediacy of these basic riffs. The result has a foot in two worlds and creates a miasma of interest around the resulting center.