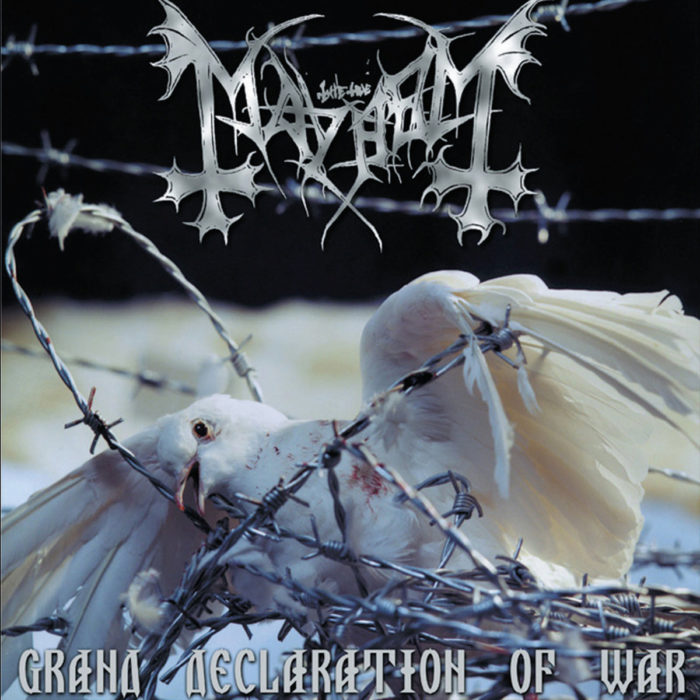 A common theme you hear in critiquing music is the need to separate the art from the artist for the most objective analysis possible.  This all sounds good on paper, but we are all human, and the flaws that imbues in us make our understanding of all concepts skewed by perspective.  The metal path is one of social outcast and self-discovery through a grasp of the larger whole, and as such we are left with the purest essence of form and function, but still we allow our humanness to cloud our judgments inevitably.  We won’t give the time of day to a record made by some stretch-lobed lumbersexual even if he might have accidentally produced the next necessary evolution in metal, and we like it that way.  We have been proven right long enough by lousy records and “evolutions” of our favorite artists but although we may have erected a necessary safeguard for quality control, we need to analyze if it is constructed of statements and proofs of inherent positive musical traits or our own hubris instead.

Metal is equal parts an acknowledgment of reality and fantasy in music form.  We have come to appreciate an outlet that celebrates the shunning of social norms and skewers the inanity of modern life, but in looking for those qualities, we are inevitably imagining the forces behind them.  We want the music we love to be made by people that get the world the same way we do.  We want a band like Mayhem to be savages channeling a primitive blood lust so that we can have our own fantasies of rebellion barfed into our eardrums to distract us from our own personal modern hell-spaces.  We have acknowledged that our humanness and the flaws that come with it have rendered us as incapable of achieving the metal ideal and we therefore need our heroes to express the sentiments of it for us.  If anyone falls shor,t we sharpen our pitchforks in disgust and willingly go about our pointless empty lives as another badge of guardianship sewn to our vests for our peers to see and admire.

Grand Declaration of War was the most pitchfork-sharpening record since Cold Lake upon its release, and it wasn’t for lack of ambition: a concept album within the “black metal” genre was already off-putting due to the preparedness and inherent betrayal of instinctual channelings that come with, and what constructs the record is a shocking palate of grandiose visions and execution, helmed by a seeming multitude of characters portrayed by vocalist Maniac, who guides the narrative of the release through a series of challenging dimensions that clash horrifically upon each other in shockingly confident fashion.  What we need to reflect on eighteen years after its release now that the dust settled is whether the record is a carefully constructed singular voice of musical assertiveness, or a haphazard collection of half-baked ideas that warrant the criticism it had always garnered.  If we allow ourselves to truly separate the artist from the art here, we are left with an answer that lies somewhere in the middle.

Oddly, Grand Declaration of War is a natural progression from Wolf’s Lair Abyss in that it focuses and expands on the chaos inherent in that release, and no ritualistic elements or primal urges are anywhere to be found.  It begins with the outro theme of Wolf’s Lair Abyss and spirals forward with an effective militaristic cadence that showcases a polish to Mayhem that we had not previously heard.  Drums and guitars are lock-step rhythmically and all rough edges are smoothed out into a robotic coldness that resembles the misfiring of synapses more than the natural flow of general being.  The concept lyrically appears to be a war waged by the speaker(s) against Christianity which is nothing new, but the disconnect here is that the music is so complex, polished and robotic that the rote understanding of evil overtaking good is in no way developed aurally, and if there is any war to be had, it would be war on natural order. The vision of the record, grandiose as it is, spills out in such an esoteric way that the familiarity of the fall of Christianity as heard in other records would be better off eschewed for a storyline involving something more in line with alien abduction than biblical apocalypse.  As the record progresses, lyrical themes become more vague as the album sheds more and more metal layers and by the time Maniac blurts something about “reconstruction” you’ve arrived at a completely sterile musical performance piece that echoes a future devoid of human essence of any kind: a world cleansed of its greatest plague yet desperately missing the conflicts that arose from it.

All of the red flags of metal criticism are on display here, and then some: we have overly complex riffs and arrangements, a complete betrayal of the metal arrangement in the form of a trip-hop interlude that may be the longest five minutes of your life despite what it means for the storyline of the record (a cold soundscape immediately following the destruction of the planet is effective at depicting the theme of a callous wasteland devoid of life), the most clinically sterile production on a metal record at the time (the drums are a laughably triggered Tupperware), and a heavy-handed pretentious approach that alienates the listener far more that the actual intent of the progressions ever could.  What the album does right is in establishing legitimate musical themes that do occur repeatedly in different ways to both progress the narrative and show how elements of the story have affected each other in the process, and while doing so it sticks to a fairly rigid tonal and and technical base so aside from the EDM aberration splitting the two halves of the record, there is a focus on a holistic record on display.  Occasionally there will be passages that do not flow together and silences will be stapled between two parts that have no unity in any way, but this may be a window into the dichotomy of the band’s war with its classic naturalistic history and the cold understanding of its needing to progress within a genre that allows very little leeway.  Composed mainly of minor-key arpeggios and tremolo-picking of chords and single notes through chromatically fluctuating arrangements, the band manages to elaborate on black metal, grind, and doom passages with a surprisingly restricted musical palate, which is something they should be commended for.  The rhythmic undercurrent of certain songs may have served as a progenitor for the djent crutch of breakdown focused odd timed open-chugs mirrored by bass drum hits, but here serve as palate cleansers for the relentless high-register arpeggiated attacks and are quite effective in developing a machine-like character for a band that has no business behaving as such.

Should there be only the aforementioned complaints, we would possibly have a minimally maligned successor to Wolf’s Lair Abyss, but there is far too much gimmickry adorning the chaos to give full recompense: Maniac is frustrating and annoying, and his command of multitude of characters used can be outright laughable at times, echoing musicians more in line with Marilyn Manson than his predecessors in Mayhem.  There is a moment on the record that is several minutes of complete silence, which whether effective to the story or not, screams a pretentiousness that further distances the record from the black metal genre as a whole.  When the record concludes, you are not left with a catharsis but a void that accurately reflects the seemingly mailed-in second half of lyrics for the record. It is impossible, even eighteen years later, to fully understand what the record is trying to say, and this is not because it is too technical, has a trip hop song or because Hellhammer wore a goofy mesh shirt in the promotional pictures: it is because it is doesn’t fully achieve a complete vision aside from having admittedly dazzling musicianship obscured by deliberately clashing superficialities put there seemingly to throw the audience off of a natural understanding of a musical achievement by not only Mayhem but any other band in extreme music.

This was not the criticism in 2000 nor will it be for many in 2018. But should you follow the progression of the band’s intent here and not its execution and mirror the music in shedding humanness to leave a callous shell through forgetting the Mayhem of the past, objectively you may arrive at the same conclusion.  Those who won’t get there because they won’t allow themselves into the record or vice versa will have earned a similar yet adjacent fate.