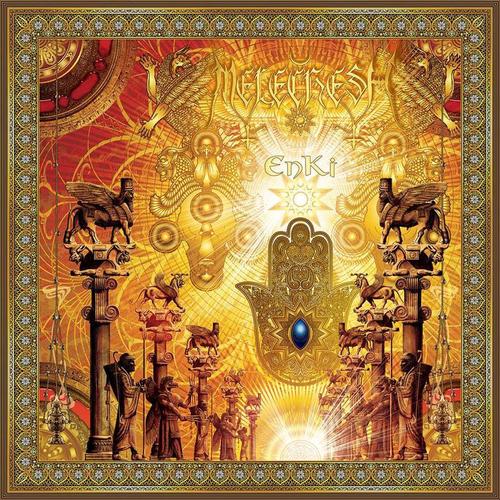 Back in 2010, Melechesh’s previous album (The Epigenesis) made its way onto our “Best of 2010” list. I don’t know what to make of that, but this year’s batch of Melechesh doesn’t live up to that hype, despite sticking to the band’s signature mixture of streamlined extreme metal with older substyles and (importantly) a Middle Eastern folk garnish. The problem here is a common one – directionless, flat, almost random songwriting. Whether or not this afflicted previous works by the band is hopefully something someone more versed in their past might be able to shed some light on.

That the structural side of this album is so underwhelming is belied by the good first impression that Melechesh makes with their polished sound. They succeed in combining their three aesthetic streams where many bands stumble with two… or less. For instance, the band constructs almost every riff and phrase they use from vaguely exotic scales like the Phyrgian dominant, the double harmonic (“Arabic”), etc. This indicates greater dedication to the aesthetic than, for instance, Nile, and doing something similar in your own work will probably get you further in the long run than merely tossing in some instruments that are culturally relevant to what you’re trying to imitate. Not to say that Melechesh doesn’t add in extra instrumentation, but it’s skillfully incorporated into their sound to the point that it never seems incongruous. The older metal and rock elements, in comparison, don’t make themselves as immediately apparent, but they imbue this recording with a strong sense of conventional musicality that makes it easy to pick up off the shelves and listen to by the standards of its nominal genre.

The deception this entails means it took me a bit to pick up on how little of the content here was actually making its mark. Enki showcases its share of isolated musical ideas with which one could build a song, but arranges them in an entirely haphazard and arbitrary fashion. The general lack of dynamics also helps in building an environment full of interchangeable content – one entirely folk interlude (“Doorways to Irkala”) and some halfhearted soft sections does not an adequate substitute make. It may be that drone and repetition form an integral part of Melechesh’s songwriting, but the best bands to rely on such techniques don’t simply vary themselves through minor variation, but arrange such in a fashion that allows for actual in-song progression. Melechesh’s failure to do so combined with other aspects of their style make for an experience that decays to irrelevance shockingly fast.