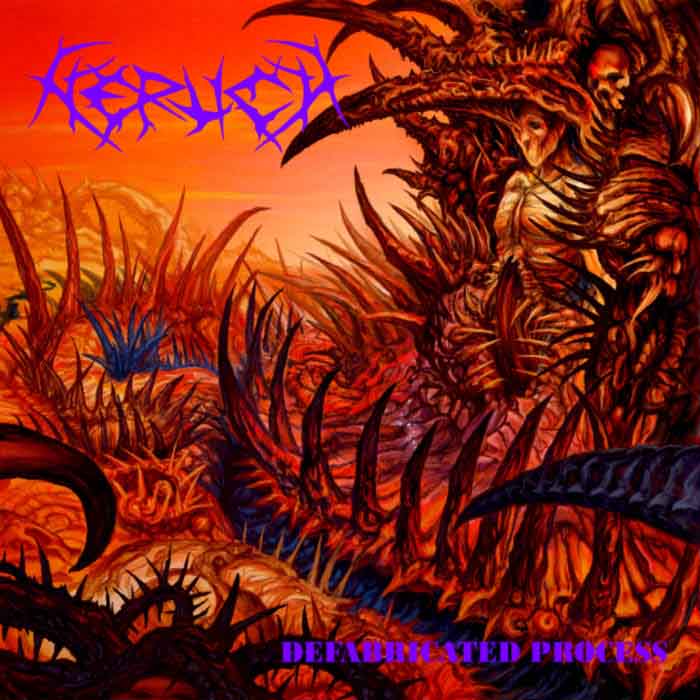 The Many serve the Whole. Drums and guitars make good use of their influences as we shall see below, although there is always room for improvement. The lyrics follow the musical performance and all the instruments blend together to communicate with the listener. For example, the tight palm muted heavy riffs in the homonymous song, wherein the bass follows the guitar, pave the way towards their unfolding, as the bass follows its own low path and the guitar weaves a Death/Atheist style lead melody, managing to sound analogous to the skin being flayed from the flesh through this contrast – defabricatory indeed. Regardless of whether this is done intentionally or unintentionally, there are analogies to programmatic music in romanticism, and by such tropes Nerlich uses the lyrics to construct climax, while quite often achieving catchiness.

Worthy of note is the 6th song, Mask for the Faceless, which starts out as Seasons in the Abyss and then develops through Slayer/Adramelech riffage in a plateau of tremolo picking death-trance that creates a sonic morphology culminating into a vocal mantra before reverting back into Demilich style riffing. Finally, all this sense of continuity breaks apart with a chugging heavy riff evolving through Suffocation directly from Metallica, which ends with a Necromantical Screams procession. The band indeed honors its influences, which are quite apparent but often mix rather well.

At the same time, they are far from a nostalgia tribute band. As a counter-argument to my previous article on the plasticity-divergence-convergence triptych, I think that Nerlich are rather low on the divergent (rebellious) aspect. Nevertheless, this might be deceitful as by obeying existing forms the band here manages to find its own voice, in a way that one of our readers pinpointed as ‘traditional’. This should be perfected, but it truly works for now and for most bands, maybe only this would be needed and the divergent element would lead to failure. As an average seminar of innovation would point out, a simple method to create something new is to mix an existing idea A and an existing idea B to get C. Of course, what often doesn’t get through is that not all ideas mix well, and this reflects on failed businesses who wanted to launch useless products. It’s a pity that while in the business world worthless innovations can die, in the artistic one they are rewarded and revered, even if it is for a small period of time after which they are thrown away like toilet paper.

On a lot of tracks, the Slayer way of phrasal construction creates a Hell Awaits flashback and one cannot help but make a retrospection on its everlasting impact on death metal. Perhaps, Hell Awaits is the first metal album which managed to create such a deep level of immersion on the listener, as to build worlds in his imagination, of which the covers of infernal landscapes on the covers are reflections. All in all, Nerlich is a good chance to celebrate everything that makes this music idiom unique.

Delving deeper, another interesting aspect of this record is that all the instruments sound very tight together and only if the listener takes a step back he can discern that they play quite complicated riffs, especially on the first half of the record, but due to the speed of execution the wavelengths collapse into deceptive unity. This peculiar phenomenon adds re-playability to the record, since the audience has more things to explore on subsequent listens.

Overall, this opus is faithful to the tradition of death metal as it should be played: adventurous and straightforward. The only blemish I find, is that its personality could have shined a bit more at parts. Sadly, it’s the only full length offering by the band until their recent resurrection, the results of which on their small EP were poor due to mediocre melodies not mixing well with the rest of the instruments. But those weaknesses are rather minor and perhaps overemphasizing them does injustice to such a good album.

No wonder death metal is on decline today. This band is a reminder that death metal demands attention spans in order to appreciate it properly. We always protest about good music not coming out, but good music also needs worthy listeners, thus we must also blame most people who listen to ‘metal’. This album didn’t get much attention when it came out and it doesn’t need to. It will lie in the vaults of the underground as a rare testament of good death metal musicianship.