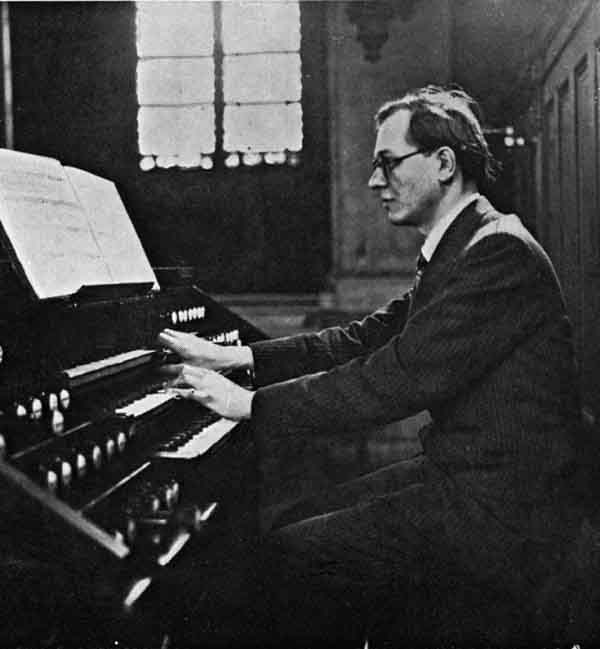 Famously noted for having claimed that he saw colors when listening to music, Olivier Messiaen was born very early in the 20th century (1908) and was one of the last in a litter of bastard composers to be caught in the crossfire between a lingering romantic spirit and modernist aesthetics. This extremely vivid perception of musical tones and his fondness for birds and their songs were, doubtless, a great influence on his methodical choice for musical language. This includes his own compiled and defined modes of limited transposition. These existed before but he was the first to compile them and examine their boundaries and relationships exhaustively.

Hanging in an interesting intersection of the concentrated meditations of Ildjarn Landscapes, Tangerine Dream’s and Klaus Schulze’s early improvisation-like soundscapes and the latter’s methodic motific constructions, Messiaen’s organworks such as Les Corps Glorieux anticipates them all and brings them together in a very personal language. Appart from that, we find passages that could be taken from the most bizarre organ fantasias dreamed of by Baroque or Romantic composers. What is special about these works is the convincing power with which he brings all this together without falling into the modern tendency of classical music to twist around and transform ideas so quickly the listener barely has time to be submerged in them.

In contrast, his music lingers in the ecstatic wonder that we might guess was induced by an appreciation of nature and its patterns as the grand work of the Judeo-Christian god as per his Roman Catholic beliefs. The exact source of it is not important, but the state of mind achieved in silent and inner introspection and  outwardly-projected contemplation is transmitted in these organworks through a plethora of distinct techniques that Messiaen manipulate without incurring in an overcrowding of any particular piece. But even when a comparison between movements is done, the nature of the whole work is not disrupted, all come under an intent, even though each of these is an idea of its own. While any can lump compositions and songs in an album or title and call it a day, in Messiaen’s different organworks we find the perfect example of  works as expressions of ideas in episodes. Integral works that divide individual ideas into self-contained movements.

The recordings of 1956 are said to suffer from audo-technical problems even for the recording technology of the time. A hiss is present here and there, and not all tones are captured in the pristine way that classical music audiophiles fantasize about. In addition to that, the way Olivier Messiaen himself plays his works on the organ is criticized heavily by some, arguing that he is not a real organist. This is quite a statement given that he held a post as an organist at a church for decades. The third condition that affects the recording is that the organ is said to be out of tune, with some pipes diverging slightly from how they should sound. In my personal opinion, given the nature and character of Messiaen’s music, and the fact that he wrote the pieces for that precise organ, the imperfect condition of the instrument is perfect for the performance. His talents are more than enough, as he composed and feels the music he gave birth to, filling it with  expression in rubato and more as it flows through and out of him. The subpar recording and defects in hiss and what not only add to the eery atmosphere of mixed wonder and dread that probably represents the Christian fear of God. Love and admiration and extreme fear mixed together in irreconcilable battle for primacy in an endless cycle that fades into eternity.

The following is a three-part series of articles discussing this performance and contain links to horribly-tagged mp3 files of the 1956 performance of the composer’s works by himself:

“While he was instrumental in the academic exploration of his techniques (he compiled two treatises: the later one in five volumes was substantially complete when he died and was published posthumously), and was himself a master of music analysis, he considered the development and study of techniques to be a means to intellectual, aesthetic and emotional ends. Thus Messiaen maintained that a musical composition must be measured against three separate criteria: it must be interesting, beautiful to listen to, and it must touch the listener.”