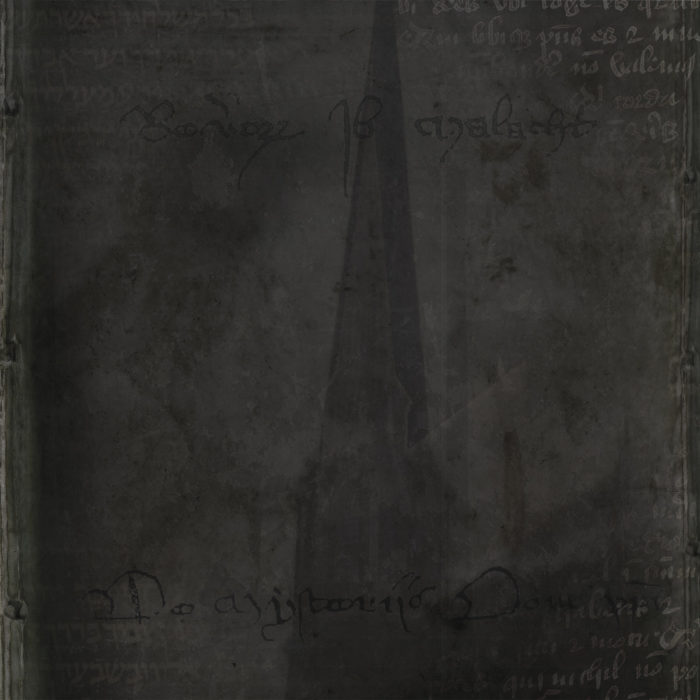 Dark ambient and raw black metal have always held a close relationship in shared attempts to create dark, haunting and visceral music experiences. Euronymous once claimed Abruptum were the ultimate perfection of the black metal sound despite the band being more accurately defined as a venture into the mysterious world of dark ambient. This trend continued onwards over the years as we’ve seen black metal musicians venture into dark ambient projects such as Stallagh or Moëvöt.  Yet despite many years of this alliance, no band has ever formulated as perfect a marriage between black metal and dark ambient to create a chilling, epic masterpiece in the way that Reverorum Ib Malacht has on their 2014 work De Mysteriis Dom Christi.  And- much has their title suggests- they did so by boldly defying everything dark music was known for.
Musically De Mysteriis Dom Christi is committed to sound and atmosphere first and music genre second.  Through the run of the album, the music is full of mystery and fear.  It is wholeheartedly ritualistic, a spiritual act of worship through and through.  A dark, faint, murky production cloaks the sound in obscurity and allows black metal parts and dark ambient parts to intertwine seamlessly.  This creates an intelligent marriage of the two by blending them in a way that doesn’t feel like one holds power over the other.

A trinity of releases of music baring the same title (with this review focusing on the CD release), De Myseriis Dom Christi is the sum of many parts working in outstanding collaboration with each one operating at an advanced level.  Lyrically, Revorum Ib Malacht have completely one-upped the black metal hordes by writing the entirety of their word in perfectly translated Latin.  Vocally, their dictations vary in effect and placement and take the operatic Atilla style to a more avent-garde direction that masterfully blends with the sound, with some traditional rasps thrown in for good measure.  The guitars, drums, bass serve equal importance to the strange ambient instruments that vary through the album in working collaboratively to create a soundscape of darkness and threat.  Ultimately, De Mysteriis Dom Christi manages to portray the real horror and threat intertwined into the human experience  in a way bolder than ever.

Most importantly, this is a Roman Catholic album.  Yes- these haunting, foreboding rituals are in praise to the Lord, the one true God of heaven and Earth, the creator of all things.  The band is so bold in action and advanced in wisdom that they understand perfectly the truth: all music, all joy found from it, all friendship between musicians and happiness of work and creation, is celebration of the Lord and his works, as these are works of the Lord.  If one is to create music that acknowledges darkness, “Satan,” or occultism they are acknowledging the creations of the Lord, they are partaking in celebration of the Lord’s gift of music, and are basking in his creations.  Will creating a goofy “occult” metal album help you escape your creator, whose laws markings of intelligent design construct our entire universe?  Are darkness, mystery, unknown, fear, not the work of the creator of all things?  Is the celebration, intrigue, and fear of these things not the core of the “black metal essence?”

Better yet, are you man enough to handle the truth that the darkest, most obscure black metal ever created is Catholic?  Are you strong enough in heart and spirit to accept the plain and obvious reality that Christianity has dominated paganism, witchcraft, satanism, and all of the religions of this world because it truly is superior?  Is your individualistic fantasy really that strong if you’re ultimately bound to the unbreakable laws of existence?

Truthfully, while De Mysteriis Dom Christi is an outstanding metal/dark ambient work, it will be too harsh a pill for most to swallow.  But those with superior IQ and hearts of courage will be able to appreciate and celebrate its true genius.  DEUS VULT!!!