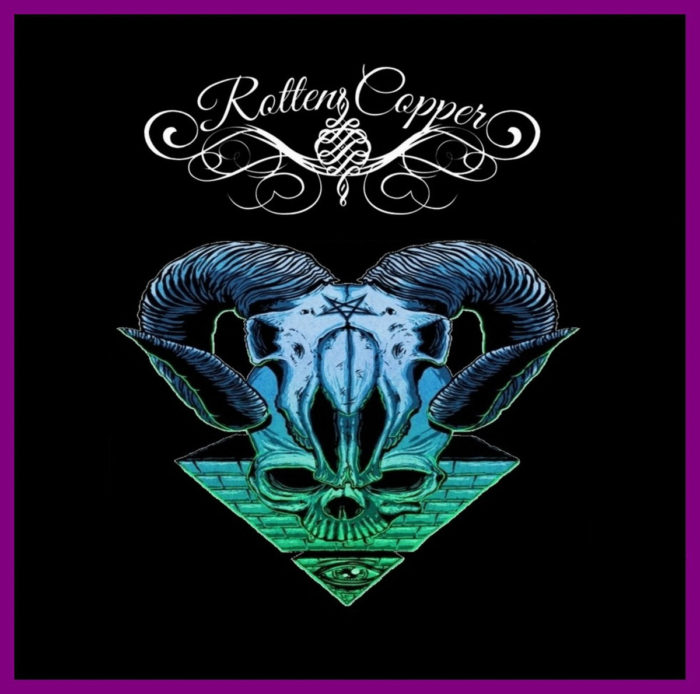 In both cases, the same error is made: form over function, appearance over purpose, stability over goal. Metal remains stranded within the power of its technique, and has failed to discover its own soul. As a result, we live in dark neurotic times where there is no clear path that unites aesthetic and content into a consistent, articulate whole.

Rotten Copper surges into this gap by attempting a more popular metal/goth style that preserves the spirit of underground metal. It almost achieves this, but confusion over how to execute vocals pervades the album, preventing it from having a style that is distinct as its own, and so this has to be viewed as the antechamber to future acts.

Musically, this release most resembles the shredder era of the 1980s which combined a fascination derived from jazz with finding distinct chord progressions outside of the repetition of rock, but added to it a heavy metal sense of having to make songs pair with an expression of life in metaphorical form, and then worked progressive rock technique into that. These are solid songs constructed around short melodies which implicate complex relationships between the positions of the scale and the harmonies they imply.

As a result, this is an album that a listener could listen to without vocals and enjoy entirely. Songs fit into a middle zone between Danzig and Joe Satriani, generally following a cyclic pattern of verse-chorus, but gives to each song unique texture and at least one deviation from this form. The underlying melodies, picked through a rich harmonic field, give each song a distinctive shape and content.

Vocals vary between a Motorhead-style rough growl and a Fields of The Nephilim style of Gothic operatic singing, with Danzig style minor-key melodies right in the center. Guitar riffs incorporate black metal and death metal technique, but keep a harmonic center as opposed to being strictly a strip of interesting intervals in a chromatic base, and so songs develop easily with abundant space.

There is great potential in this release. For now, it seems slightly confused, mainly because of stylistic elements, but also because owing to that lack of stylistic clarity, this band has not yet fully explored its content, or what it wants to express. Nonetheless, this is better than what all but a rare few bands in the underground have expressed since 1995, and shows metal a way forward without the dead underground.