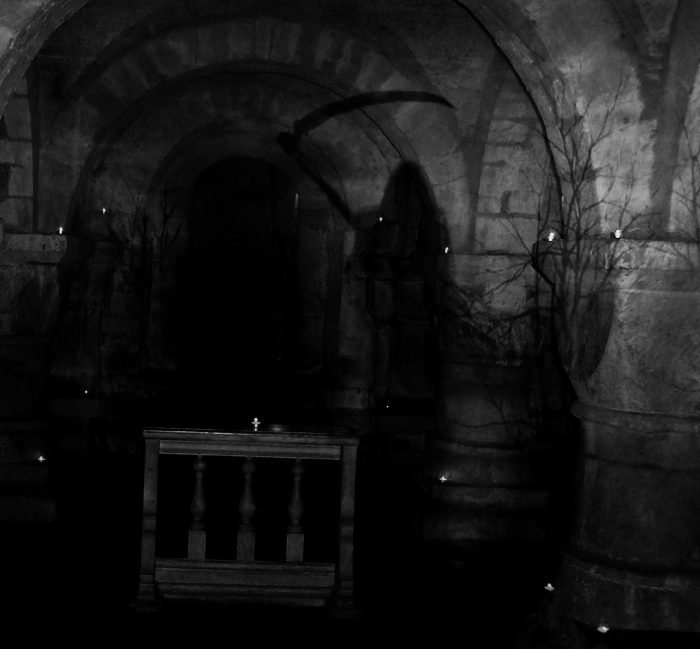 Shadows in the Crypt was the promising black metal act led by Lawrence Wallace, of his own long-running dark power/speed metal act Moonlight Prophecy/Lawrence’s Creation as well as being the former lead guitarist of bandmate Schatz’s power/black metal fusion Serpent ov Old [1]. The lineup on Cryptic Communications features a diverse lineup of musicians. Lawrence himself as the primary/lead guitarist apparently has little to no black metal band experience other than this band, Schatz appears on additional guitars and bass, and the drummer is a tech-death drummer (notably possessing the chops to be a brief participant in tech-deathcore spastics Ring of Saturn). In fact the only members of the band that appear to have more black metal experience than not are the vocalist Necrodemius Hammerhorde and Schatz, of numerous minor black metal bands and the more notable Serpent ov Old respectively. The result is a muscular speed and power metal-derived black metal that is at its best and most promising when the backgrounds of these talented musicians synergize, not into a collection of individual genre cliches, but a well-stated fusion that allows for the abstract strengths of these styles to create dynamic narratives that are felt rather than merely understood by the listeners.

Stylistically, Shadows in the Crypt relies much more on a muscular, quintessentially metal sound than Serpent ov Old on this release. The combination of the tech-death drums and the liberally peppered speed metal riffs give the album a feeling that is half-way between death-metal heavy USBM and a more Scandinavian sound, that is, until one of the power/prog metal solos rears their head. This does not always work; in some cases the prog metal solo voicing is not given enough lead-in and clashes with the brutal riffing as a result. However, when given appropriate lead-in and appropriately integrated into the black metal, such as in the ending of “Baphomental Affliction”, it is very memorable and musically effective. Additional highlights occur when the speed metal riffing and black metal sense of drama combine at once to enhance the impact rather than occupying separate musical spaces, as the excellent second riffs of both the aforementioned “Baphomental Affliction” and “As Shadows Cover”.

Overall, Cryptic Communications is an imperfect but absolutely above average album that offers a lot of its own unique promise, enough for me to recommend it as currently relevant listening. For the most part, even the straight-forward black metal has enough of a darkly triumphant mood to offer to make itself memorable, and it does this better and with more commitment to the mood created than a lot of other bands playing speed-thrash metal hybrids. I would say that both its weakness and its real strength both derive from the stylistic diversity offered on the album. At its worst, it can sound a little jarring and confused, but when structured appropriately, it creates an emotionally powerful narrative with a style that is more or less unique to the band, and that is an increasingly rare thing to find. I would encourage Lawrence to revisit this potential.

You can purchase the album here:

[1] Serpent ov Old was mentioned within our article Whispers of the Kábeiroi: https://www.deathmetal.org/article/whispers-of-the-kabeiroi/