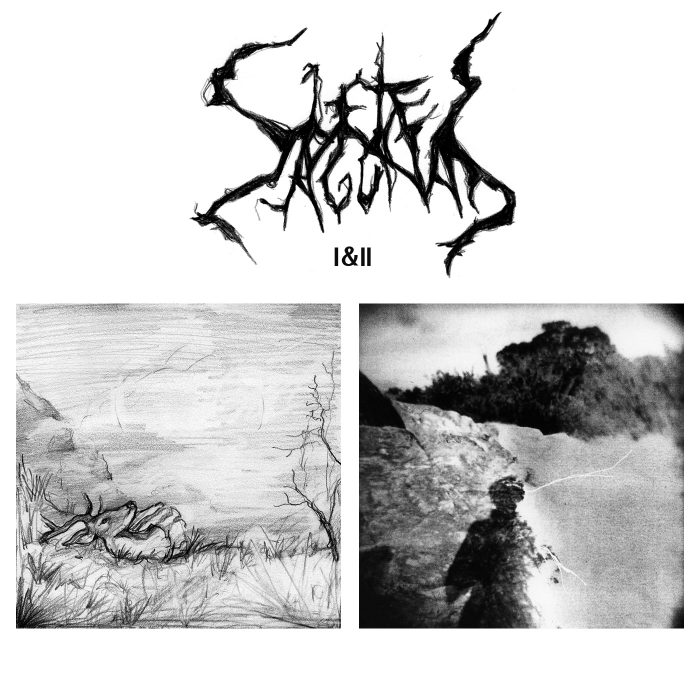 Siete Lagunas is an experiment in metal music that is ultimately an attempt to move beyond the realm of standard expresions in the genre (such as particular motif formations, Slayer-isms, or other stylistic encroachments) without disregarding what traditionally defines metal (i.e. phrase, and the use of ‘power-chords’). We can see this not as a rejection of form and style, but rather as a return to the original material of music: the sound. Search for an intuitive expression through sounds rather than an abstracted arrangement of notes then, becomes the preocupation of the composer. The resulting attempt at music making is at once disconcerting and exciting, fulfilling yet nauseating. And while there may existe the temptation to draw parallels with grindcore, such a comparison would be misguided and misinformed. Rather, we may see a connection to what was once termed ultra metal in Colombia [1], in which primitivism opened the gateway to channeled chthonic creativity.

The first demo, titled simply I, sees the two members of Siete Lagunas wrestling with their own musical tendencies. We see traces of folk-like melodies appearing as riffs, phrases leading nowhere attempting to cancel themselves out, interspersed with brief incursions into the realm of noise. The general impression left by this first demo is one of potential, but also of great indecisiveness, where no idea is completed, and where different influences enter into conflict yet find no resolution. Even the names of pieces and cover art attest to an attachment to folk traditionalism, while a desire to explore darkness is manifest, but ultimately shied away from. But in such an exporation of obscurity there can be no half measures. As has been written elsewhere, if that gate is opened but a lack of resolution causes failure in the quest towards the bloody grail of the void, a fate worse than delusion and blindness —or Death— awaits you. While the culmination of the demos hints at a major breakthrough for metal as a whole, a breakthrough which was longed for by some of us when Nadia was unearthed, renunciation from the quest towards immortality in darkness among the stars is still possible if the delusions of constructs [2] and hubris are indulged.

The second demo here, titled II, shows us Siete Lagunas finding a scent, leaving behind the folk-isms and reducing the genre tropes of metal to a bare minimum. Instead, the remains of the latter are sharpened to an almost indiscernible point. Now we find a glimpse of the unnamed terror, as a blindfolded devotee who has fasted and lacerated himself for days finally finds his consciousness invaded by the sadistic deity. Again, it is not ‘noise’, but ‘pure sound’ which is the object of manipulation, and that, within the most extreme confines of metal, stretching those boundaries and allowing intrusions from the outer darkness. Here, we hear echoes of the savagest promises held by the album Nadia by Cóndor [3], in which a series of firm, thematic riffs came together with whisperings and crazed vocalizations of a lost race seeking spiritual meaning in a tierra inhóspita [4]. In Siete Lagunas II the saccharine moments, the traces of sweetness that held Nadia back and at the same time completed its duality-based dynamic, are almost eliminated, with only the closing arpeggios revealing the last bit of humanity to be erradicated.

Siete Lagunas has found a seed of evil, and which seed can be fed with blood, and fomented in darkness beyond artistry. The potential for longer episodes, developments in acts and sequences of meaningful sound arrangements that effectively and dramatically alter the listener’s mind. For this, an eloquence in dark riffage must be found, and a way to transmit a stillness of mind without hints to an already deceased humanity. The future work of Siete Lagunas can be the sonic emblem of a superior, mayhaps galactic, species assimilating those parts of its mind and reality deemed ‘sinful’, ‘dangerous’ or ‘detrimental’ to the weak —for the weak might inherit a broken Earth, but we shall conquer the Stars [5].

[2] Constructs to which belong both attachments to old genre stylings as well as imaginings or sentimentalisms towards ‘folk’, ‘ideologies’ or ‘art’.

[3] Refer to the composition titled ‘Lector in Fabula’: https://condormetal.bandcamp.com/track/lector-in-fabula

[4] Refer to DMU’s profile of the Colombian band Cóndor: https://www.deathmetal.org/news/profile-condor/

[5] Siete Lagunas’ intuited potential is closely connected to what is hinted at in the article Whispers of the Kábeiroi: https://www.deathmetal.org/article/whispers-of-the-kabeiroi/