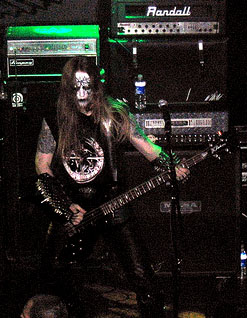 Confusion marked our entrance into the Knitting Factory, where it was being decided that bands would not play in the order originally listed. Making it more chaotic, they all played on the same stage, ensuring that hasty transfers of band would scatter personnel and equipment across the stage and inevitably result in some “who has the voice mike” satire. Despite this tower of live performance Babel, the bands involved bravely sallied forth with loins girded in guitar straps and gumption alone.

The first band, Ascension, played to a mixed reception. Their style would be hard to describe except that it is that fusion of death metal and black metal that underneath the skin sounds like it was assembled from old B-list speed metal bands, and so is very chorusy and bangy but not very clear. It would be hard to tell much about this band from their presentation at the event, but this did not appear to jar them as they bashed out a comprehensive set.

We were excited to see Averse Sefira play as the third band after several other local acts which presented music in varying degrees of conceptual completion. Most of these bands are good at what they do; they can play their instruments, know enough of the genre to make a competent stab at it, but the question is “what do they communicate?” It is a hurdle every new band, no matter how old or seasoned its members, must overcome, and seeing these new acts struggle to define themselves by what they would give to their audience in the form of transferred experience drove our pulses to fury in preparation for the main act.

The crowd gathered, expectantly; you could tell this mix caught the curious and the diehards alike. I have often wondered what impels the choices people make in attending shows, and why they would pick one metal band out of thousands, as if it alone differentiated itself enough to be meaningful or relevant while others became slag in the battle for mining threads of coherent mentation. Most metal bands, like most people, are working in an archetype or combination of archetypes, assembling a product which fits into their known scope of experience and little more. They qualify as metal but other than the clueless and the fans who attend a weekly show in hopes of bolstering lives of boredom, attract few hearts or minds, and not for long.

It is in this arena of meaning that Averse Sefira reign supreme as occult art… Where metal bands can narrate tales of war, AVRS the have the *soul* of a man *engaged* in an apocalyptic war. You feel the same hellish strife that perhaps the hobbits Frodo and Sam struggled with at Mordor in Tolkien’s *Return of the King*, or the epic conflict a lone hunter finds when crossing the frozen north to reach a new land. Whether or not metal “has” soul, these tales of soul-conflict are what sustain its listeners during a time when every other pressure exerted on them is an exhortation to give up and make the kind of compromise that makes products not leaders.

When Wrath and Sanguine were testing their microphones, they were demonic beasts barking as wolves do when threatening their prey. The sound guy was having trouble getting everything right, then a projection screen rolled down on Wrath’s head which infuriated him and the apprreciative listeners of AVRS. They were in the middle of their first song, but he continued to play well. This show in Hollywood may have had problems, but the occult war music of AVRS transcended this and remained powerful on those beings that understand it. 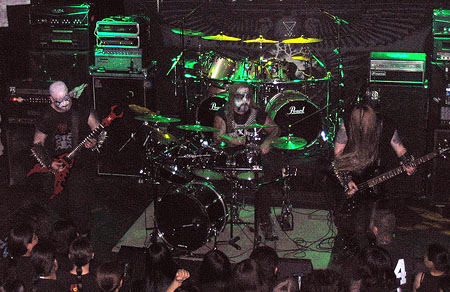 I brought my friend and battle-comrade Mateo, and he called for a song, Argument Obscura. Wrath heard, so the band played. The Carcass like an animal seized sonic space with aggression toward dominion, and Sanguine’s fingers were claw-like tentacles across the mangled fretboard of his guitar. Wrath continued his defiant performance, bass weaving with the military aerobics of his stage presence, ignoring all obstructions (see passage above about chaos onstage) while returning to the surging rhythm of the music like a descent into hand-to-hand combat. The band held a posture and backed it up with quality, complex music and a performative impact that was both metaphorical and literal: this is war for art.

The crowd, as always, hovered in uncertainty without an echoing voice of overlord to tell them what to think. Many would have been happier with an updated version of Motorhead like Goatwhore, or the mishmash of metal successes over the past thirty years that most bands try to mix into a whole with few real standouts. The Averse Sefira assault caught them by surprise because it was not just aesthetics, not just music, and not just presentation: it was a whole, a moment where art spoke a worldview through the methods of its creation and the mentation required to get there. Open mouths and a buzz of generic dialogue flickered to life after the band left the stage.

Much of the metallic occult, with Yamatu — contra (“pvre”) stereotypical Black (“fucking”) metal — brings one into an ancient world long forgotten, like Atlantis or Lemuria. Averse Sefira’s performance was no exception, although given a “so-so” when they really deserve the highest praise, but this seemed to go to 1349 who managed a tight, dynamic set but did not achieve that vector of ideas that separates the great from the competent. Their performance was reminiscent of Mayhem’s “De Mysteriis dom Sathanas” and matched it in intensity, but did not leave that otherwordly sense one has when confronted with ideas that change the way future ideation will form. It was not the trance-like cessation of reality, except in metaphor, that Averse Sefira brought to the stage.

Murmurs of a mind in pure suspension of disbelief, a state like that before birth, the steadfast concentration without effort from the conscious mind of the warrior, concealed in vigil of death, on the edge of the forest… We are falling beneath the Earth (degrading to the regions of Malkuth)… We must return to an evolutionary path. By choice, or after the hymn of death has rung (renewal by fire): pulling ourselves into a black vortex, the yawning void of war. This is what their message conveys to me. Not many else today merit praise as warriors. The concept albums of Averse Sefira are Evolan retellings of Kali Yugas past and future, and the cycle has returned to the time for that era.