Obscurity, Tyrant and At the Gates
September 3, 2008
Kulturbolaget
Malmö, Sweden 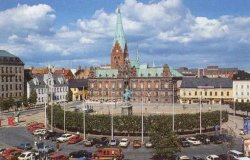 After a round of alcohol to suppress the academic background noise from that same day, we took the bus to the shit hole of the south of Sweden, Malmö. Once a great cultural market city, today a polarized ghetto, famous for its sky rocketing crime rates and ethnic segregation. Despite the social decay, Malmö has got a fascinating city life and impresses with its architecture, public events, and first class symphony orchestra. Likewise it’s the center of many metal and electronic acts, and tonight it was none other than At the Gates who would enter the stage at Kulturbolaget. A small, compact club greeted us once we stepped in, while the black/thrash metal band Obscurity was playing uninspiring satanic hymns in the old Bathory vein. The monotonous noise melted in with the screams and laughter from the nearby bar, setting me in a state of mind where the outside world seemed to be just another peripherical dream. 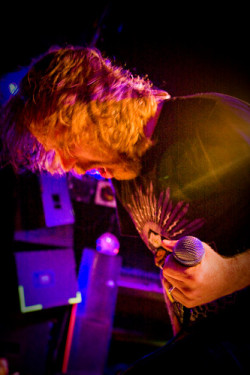 Observing the surroundings, one thing struck me immediately: a small portion of the audience seemed to be old veterans who’d obviously come only for listening to At the Gates, but the rest consisted of the typical Gothenburg crowd, which you’d expect for an In Flames show. Even fat kids with hip hop pants and Slipknot shirts showed up and were more concerned of acting hip and talking in their cell phones, than to pay attention to the music. It gave an unserious impression and made it clear that metal today has become more of a social thing for confused teenagers than being about art, ideals and principles. The next thrash band took the stage one hour late and crossed an abundance of pointless bridges with speed metal riffs and beer drinking. It was hard to take the music seriously, but the nature of these sloppy Bathory-clones made it seem like it was some form of tribute to the early Swedish metal scene, although the quality of the music said otherwise. When the concert was over, I chatted up with some of the people by the bar, most of whom were post-black metal fans, meaning they understood death metal as the aesthetic template found in “Slaughter of the Soul,” but didn’t understand the older material and couldn’t grasp the architectural differences in song writing between death and speed metal.

The people who came for the music were easy to spot, because they spent less time socializing and more time contemplating the musical experience. When At the Gates finally took the stage, the atmosphere in the club changed. The band began playing songs from later albums, and it was clear that Tomas Lindberg was in top shape. Although missing their old guitarist Alf Svensson, Tomas’ desperate screams from the red album, and the fact that the acoustics in the club compressed the sound of the riffs, this was At the Gates with full energy and expression. The feral, creative spirit of the band impressed me, and technically the performance was flawless. Tomas got almost nostalgic over the fact that they’d played in Malmö back in ’96, and now they were here again for the last time. The tour was obviously a dedication to the fans and to the music, revealed by the fact that they’d chosen to play songs from every album released. Songs that made a special impression on me were “Windows” from the red album and several classics from “With Fear I Kiss the Burning Darkness” and their first EP. It was a fresh experience, like a brutal realist nightmare, containing mental states of insanity:

Windows, sharp, cold
Wrap your psyche in blankets of pain
No more light of day
We’re the windows to your insanity

And the mandatory blasphemy of religious dogmatism: 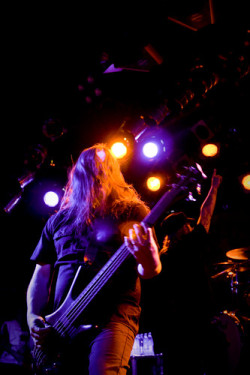 This is the essence of death metal: a rejection of a morally principal approach to life, and the celebration of the raw, physical nature of mankind. The wild, dissonant power chords perfectly layered like a mental journey, backed by the typical death metal percussive rhythms and bridges, launched a macabre symphony together with the painful vocals, and stirred the crowd into unisonal head banging. Few things offer you the experience of feral freedom, like banging your head in rhythm to the sound of death metal, and feeling that the rest of the social world suddenly is reduced to noise. At the Gates provoked us into such a mood through its atonal riff patterns and ascending harmony, proving that they were still masters of the genre. The band was right in avoiding a sell-out by only playing later songs, but naturally, the crowd liked performances like “Under a Serpent Sun” best.

The reason to why people will always praise “Slaughter of the Soul” as the best ATG album is for the same reason that black metal bands like Dark Funeral, Xasthur, Drudkh and Blut aus Nord today obscure the great classics: it’s a musically shallow template that distils 3-5 years of death metal aesthetics into a neat package, kind of like how The Abyss created the musical template for 98% of all third wave black metal bands to come. We think it’s death metal, until we pay attention to the song writing, which is basically speed metal impregnated with the harmonic riffing and technical percussion that mark the band’s musical legacy. The mainstream appeal of the album makes it easy to understand and grasp, but doesn’t contribute anything outside of its technical concept. “Slaughter of the Soul” is a merchandise product, and the audience clearly enjoyed it. Although my best moments of the concert were performances from the two first albums, possibly something from “Terminal Spirit Disease” as well, the band was energetic and keen on playing later material for the new generation of death metal fans, and in a sense you could feel that what At the Gates was doing with this tour was to prove that the spirit of Swedish death metal was still alive and causing havoc. 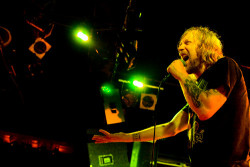 The whole performance gave a very respectable, professional and worthy impression, and the band received admirable appreciation from the audience after the finale. When the concert was over, the Gothenburg crowd slowly descended out on the streets, among traffic lights, illegal taxis, and the enormous, clear night sky. The rush of energy, passion and alcohol still boiled in my blood, as I contemplated a new perspective on a band, whose music I’d otherwise reserved to lonely nights when the world had seemed more insane than usual. Death metal, not only as music, but also as an existential passion, was pointing my life in a new direction. Through this concert, At the Gates had proved that Swedish death metal is not a legacy, but an ongoing strife to deal with life intimately and choosing endurance as value in a world reduced to hollow social values. Despite the downfall of the genre and much of its audience, the music continues to emphasize the heavy in life, and the presence of death in our immediate everyday life. “Kingdom Gone” is the scream of mankind out into black space, without response, yet with the certainty that life needs to go on.

– Written by Alexis of SNUS

Bands:
Obscurity
Tyrant
At the Gates