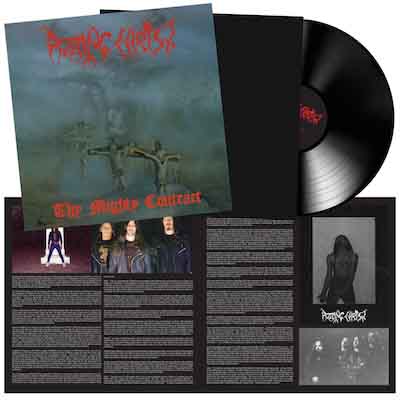 There have been many publications written about black metal, in an attempt to understand a difficult and enigmatic genre. Most focus on either the musical style of the genre from a historical viewpoint or on the ideology and views of the genre – including the illegal actions taken by a few energetic participants.

Author Dayal Patterson has attempted to combine those methods in his soon to be published book, Black Metal: Evolution of the Cult. Featuring numerous interviews and photography, the book aims to be the most complete resource for black metal research:

“It captures the progress of the genre, from its infancy in the early eighties through to its resurrection in the nineties and onwards to the fascinating scene we see today. Combining interviews with the key individuals involved with editorial insight and iconic photography this epic tome examines the artistic, musical, spiritual development of the genre and the creative work, ideologies and often colourful lives of some of its most significant bands.”

The participants interviewed include the most respected among black metal’s elite: Fenriz, Nuclear Holocausto, Tom Warrior, Rob Darken, and others; guaranteeing that there will be a level of quality already present in the tome that hopefully that rest of the book can carry.

Black Metal: Evolution of the Cult can be pre-ordered through Amazon, with a projected release date of November 13th. See the facebook page for more details.