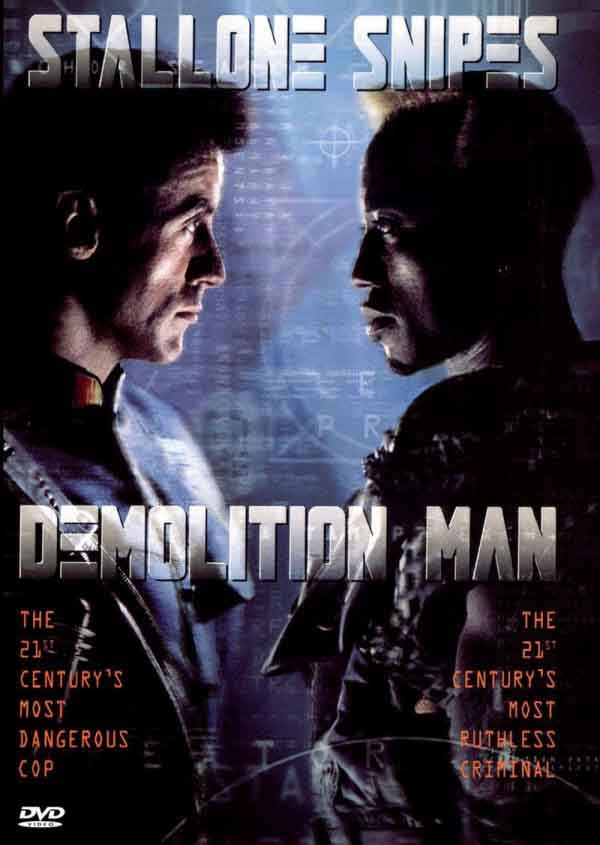 Cult movies must take on an attitude similar to heavy metal and horror films: as outsiders looking in at a society whose institutions and ideals are entirely corrupted by what humans wish were true, and populated by humans who refuse to see the obvious because of their socially-defined rules and ideals which deny reality. Every good horror film involves people fighting an evil or mortal threat, but first they must fight themselves and purge from within the assumptions that make them useless, then get their war faces on and conquer the enemy or perish.

In that respect, Demolition Man is more like sci-fi horror cloaked beneath an action film. The plot is simple: ballbusting cop John “Demolition Man” Spartan (Sylvester Stallone) is convicted of mass murder for an arrest gone awry and imprisoned in a cryostasis facility. Forty years later, the vile criminal Simon Phoenix — portrayed with humor and energy by the engaging Wesley Snipes — is thawed by what looks like a computer error. Phoenix emerges into a new world: under a utopian system of government, people have become equal parts politically correct and 1980s “have a nice day” posi-culture, rendering them utterly useless against any real threat. The criminal rages across the land and in helpless confusion, the neutered future denizens thaw Spartan and send him out to get the bad guy in a decision summarized as “it takes a maniac to catch a maniac.” The movie follows Spartan as he tries to both capture Phoenix and deal with the shadowy forces that threaten revolution in this future paradise that may not be as paradisic as it claims to be. Aiding him is officer Lenina Huxley (Sandra Bullock) who although she accepts her future world as perfect, also grates against its insipid pacifism and the boredom created by its regimentation of all activity into simple steps with almost no consequences.

The underlying influence on this movie is Brave New World, alluded to not only by the use of both Vladimir Lenin and Brave New World author Aldous Huxley to construct the name of the heroine, but also revealed in the type of hell into which Spartan falls: a society dedicated to avoiding conflict and maintaining safety that has eliminated all risk, adventure, masculinity and fun. Demolition Man shows us the horror of a society that we design based on our fears. This future world has no purpose except the negative purpose of avoiding bad vibes, risk and conflict. As officer Huxley discovers, this makes for not only a boring society, but a docile one which is manipulated by leaders who are not corrupt in the ordinary sense of accepting bribes, but in a moral and spiritual sense in that they wish to stamp out all defects and create a kind of varied uniformity that resembles the hipster scene in AD 2015. John Spartan, like heavy metal, represents the primal id of humanity which desires intense experience more than it wants safety like the neurotic ego. Simon Phoenix represents the lurking psychic shadow of such a civilization, motivated only to destroy because he rightfully detests the precious snowflake-world he finds himself in, and also because as someone entirely devoid of soul his only pleasures are found through dominating others. His addiction to victimization of others makes him a menace in any age, but the future world is entirely unprepared to deal with him because it has made is own emptiness a positive value. This conflict plays out throughout the film as Spartan finds himself caught between docile social engineers and anarchic revolutionaries.

Naturally with Stallone in this movie it requires high levels of carefully choreographed violence, but these are brainier — taking advantage of the anticipated “cult” audience — than those in big blockbusters like The Expendables which converge on the moronic. Bullock, known best for romantic comedy roles, performs convincingly as a character who is blithely indoctrinated in her new world order on the surface, but covertly hoping for something of significance to distinguish her days from one another. In particular, her comedic timing is exceptional. Stallone also reveals why action films favor him through his ability to deliver absurd lines which are both masochistic-masculinist and cryptically insightful. As the film progresses, these characters converge on a middle ground and understand each other, which brings out one of the themes of the movie: while designing utopia is a terrible idea, the anarchic void also threatens, and people are desperate for a middle zone where they are both not living in fear of random violence and also not managed like slaughterhouse animals.

Demolition Man deserves every bit of its cult movie credential. Some of these scenes are painful to watch because of the high ingenue factor of people in the future, but like other movies in this vein such as Idiocracy, the pain is necessary to reveal the full absurdity of the type of goal that our politicians, entertainers and corporate overlords routinely announce as desirable. Although this movie is hammy, it is not ham-handed in that a viewer can appreciate it as a simple story without worrying about its implications, but that layer of interpretation lurks beneath the surface and brings out an emotional depth that action films normally do not have. In this satirical treatment the crisis of humanity’s attempt to manage itself becomes painfully clear, and while these characters represent broad positions in that battle, these roles occur within the spectrum of this question and allow the allegory to work without being reduced to the level of pure personal drama. Movies such as this make us fear our wishful thinking and realize that perhaps our best intentions — with which the road to hell is paved as folklore informs us — will create a prison for our souls that only raw animal violence and blind will to crush what is empty can resolve.