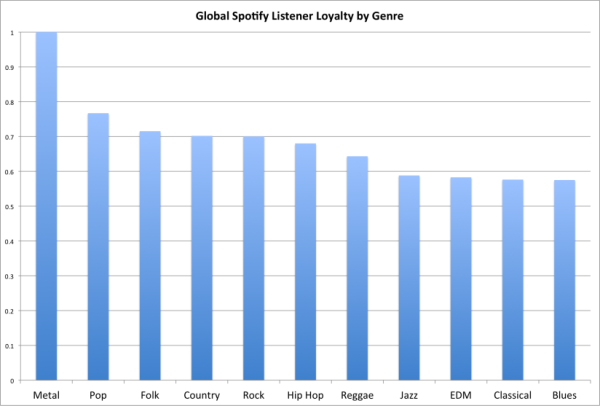 Streaming music service Spotify recently crunched data on its users to determine which fans are the most loyal. Specifically, it looked for users who went back to their favorites over time. The results might astonish outsiders:

To find out, we first identified the “core” artists that, according to The Echo Nest (a part of Spotify), are most central to each genre, starting with the big ones, on a global level. Then we did the same thing with local genres in various countries around the world. To create a measure of genre loyalty, we divided the number of streams each core artist had by their number of listeners. All of the charts are normalized against the genre with the loyalest fans.

The first thing we noticed: Metal fans are the world’s loyalest listeners (we’ll get to the individual countries soon):

To metal fans, however, this is not surprising. Metal has a quality-focused worldview that is also highly internally competitive, and as such it is “winner take all”: bands acknowledged as better than the rest are upheld as highly desired, and everything else fades into the background much like the rest of society to a metalhead. The point is that novelty and personableness take a back-seat to musical power, because metal is music that worships power as a means of making the ugly into the beautiful, and so the quality bands once discovered remain favorites.

Spotify also noted something else:

This doesn’t necessarily mean Metal is “better” than Jazz (metalheads would disagree), but it does tell us that Metal fans are in fact the most hardcore, according to this new measure of genre loyalty.

Metal fans are the most hardcore because to them, the music is not an expression of self but of truth. A metal fan seeks music with power and that can only occur through ability, whether musical or artistic, and so music that is merely friendly or sociable does not meet this standard.

As we watch yet another wave of rock assimilationists assault metal and try to re-form it in the image of rock music with metal “flavoring” or surface touches, it becomes clear why metal is desirable: the audience is highly desirable because their esteem is not lightly given and will last for decades. This challenges rock, which is based in personal music with a high degree of novelty or a message with which the listener agrees. Metal undoes all of that; in metal, the message is in the music and the personal value is in finding the best, which is why metal remains an outlier in the music market.