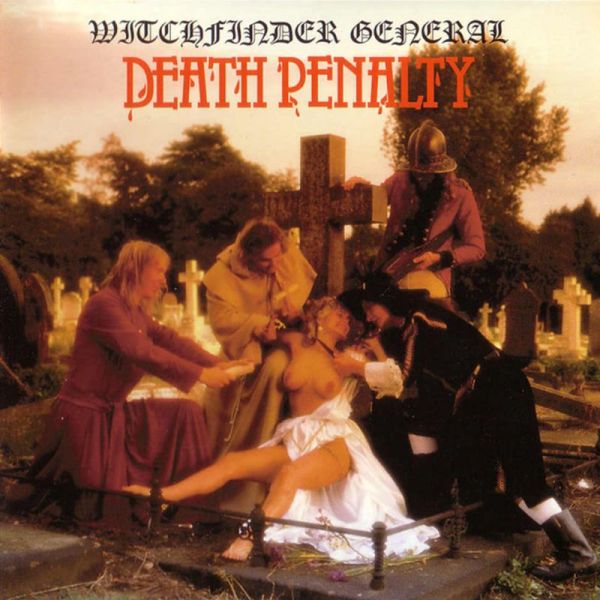 After Black Sabbath invented proto-metal, people mixed together hard rock like Led Zeppelin and came up with a new hybrid they called heavy metal, but it lacked the intensity of Black Sabbath. The New Wave of British Heavy Metal (NWOBHM) fused the energy of punk and garage rock back into the music to restore the alienated energy, and Witchfinder General numbered among its strongest arguments.

Bands making music of this nature face a challenge: the entire rock community is based on making things sound smooth and grandiose in the kind of narcissistic ecstasy that people who want to be the center of attention for their 15 minutes exhibit, and this clashes with the need to sound like a combat unit taking a break to bash out a few tunes. As the Witchfinder General Live ’83 release shows us, this band had great intensity when they could focus their energies in that fashion.

While Death Penalty features the same excellent songwriting, matching vocal melodies that evoke the ambition without regard for convention that made Ozzy Osbourne the favorite Black Sabbath vocalist, and powerful riffing that expanded beyond the rock vocabulary to the side door of speed metal, the more refined production convinced Witchfinder General to play these songs more slowly and to layer on additional lead guitar and production effects to “enhance” the sound. The result is that much of the energy dissipates into a 1970s rock filter, and the production emphasizes a thin guitar tone to which the band adapts. Other than this disadvantage, Death Penalty shows us Witchfinder General at their most powerful.

Like the best of NWOBHM bands, Witchfinder General used shorter riffs than Black Sabbath and focused more on melodic guitar composition that echoed the previous generation of British heavy guitar rock. In addition, the band injected fast rhythmic riffing using a muted strum, and fast lead fills that allowed more flexibility in riff placement, but also borrowed from many of the progressive bands a more flexible sense of song structure. There will be the verse-chorus cycle, but it often transitions with a break that emphasizes some aspect of the song and allows the band to use variants of riffs for great contrast, before returning to the original cycle. To death metal fans, it may seem tame, but in the day it was a revolution against heavy metal convention, and these songs still stand tall with a power that all those artists who wish to be more polished than pugnacious cannot capture.

Much of the focus of songwriting wraps around the vocals which guide each song ably by taking the high register and infusing just enough melody into these riffs to give each passage a hook. Sometimes this limits what the band could spend its energy on, as we can hear through many of the incidental guitar passages such as the fade-out instrumental break in “Death Penalty,” but it also helps hold together these sounds which are bursting with energy and musical creativity. Much of this album sounds like later Black Sabbath with more caffeinated leads, but that is its voice and not its essence, which is a flexible view of songwriting that never loses the need for a charge of the light brigade in power chords against the pleasant illusions of the average rock fan, then or now.