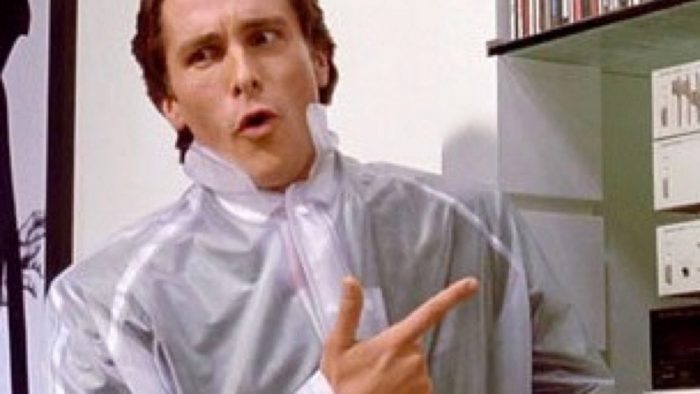 The No Murder Theory

In my experience, the most common theory to American Psycho’s ending is that none of the murders actually happened. I also believe this is the easiest one to argue for without exploring the other possibilities in any depth. Many come to this conclusion mostly because the lawyer in the final scene claims that he had dinner with Paul Allen (one of Patrick’s victims) in London after Patrick had seemingly murdered him. Furthermore, Patrick returns to what he believed to have been Paul Allen’s apartment, where he had hid many of the bodies, only to find that it was a completely empty building that the realtor was showing to a potential buyer. Finally, the scene in which Patrick reads the words “FEED ME A STRAY CAT” on the screen of an ATM is a damning evidence that not everything we were shown in the movie actually happens (as one would not find this message on an ATM screen).

My issue with this theory is that Bateman clearly has every trait of a sociopath and killer. Not one fantasizing about murder- one actually committing murder. Beyond that, the psychosis of Patrick Bateman does not appear to be prevalent at the onset of the film, but something that gradually builds throughout the story’s progression. Therefore, I can’t see how the murder of the homeless man in the beginning of the movie did not happen. Also, why is the family of Paul Allen investigating his disappearance if he effectively recorded a message on his own answering machine saying he was in London?

A more practical theory of American psycho’s ending is that Patrick committed some – but not all – of the murders we’re shown on film. Proponents of this logic point to Bateman’s progressed psychosis and the uncertainty of the characters in his world as indicators that the early murders in the movie did actually happen. The lawyer in the climax of the film believes he had dined with Paul Allen twice in London HOWEVER he also mistook Patrick for being another one of his clients. This leaves open the possibility of Patrick murdering Paul Allen though his psychosis may have caused him to hallucinate breaking into his apartment.

This theory is further supported by the absurdity of some of the killings in the film. Dropping a chainsaw on a woman screaming and bleeding while racing through a large apartment building, killing two policeman in a shootout, and shooting a doorman in a building next to the one he worked at is quite a stretch of theoretical possibility. Once again, the “FEED ME A STRAY CAT” message on the ATM screen immediately preceding Bateman’s grand finale of slaughter is offered as evidence we can’t trust anything we are shown (especially in the scenes afterwards).

I find this theory more practical than its predecessor, but it has its holes as well. For starters, Patrick does actually enter his downtown Manhattan office and leave a voicemail for his lawyer. We know this because the lawyer indicates he received the message at the end of the film. While leaving the message, a helicopter is outside the window searching for someone or something. While it could be a hallucination, it’s hard to argue that the events weren’t happening. Most importantly, there is something errie about Patrick’s encounter with the woman in the empty Paul Allen apartment. She asks him “are you hear from the ad in the Times” and when he replies that he was, she frighteningly tells him “there was no ad in the Times. I think you should leave now…” This is an extremely important clue to what I believe is the truth of this film – why would she say such a thing, if it was just an innocent, empty building? She appears to indicate that there was something haunting, tormenting, about the empty apartment they were standing in.

The All Murder Theory

The darkest, most uncomfortable possibility is the one I wholeheartedly believe:  all of the murders we witness in American Psycho are actually happening.  Patrick has all of the makings of a sociopath, is unidentifiable in a sea of Wall St. elites, and is the son of a wealthy and powerful banker that can go to great limits to protect him.  Therefore, it wouldn’t be hard for  all of the killings in Bateman’s rampages to be covered up.

Patrick Bateman kills because he wills it, his high social status gives him all of the recklesssness he needs to kill with confidence.  With absolutely nothing to live for, and no fear of consequences, there is nothing to stop Bateman.  He stabs homeless when no one is watching.  He kills Paul Allen, a man whose family notices his disappearance but to whom no one in his social circle can tell if they’ve seen him or not.  He kills models that nobody really cares about, kills his ex girlfriend who says she’s at “Joe Norman’s” place, kills a prostitute who has a pimp that’s not likely to report her disappearance (as his role as a pimp would then be identified and prosecuted).  Paul Allen’s building is well insulated and the residents either don’t hear the noise of her banging on the door, the chainsaw, or just don’t care about either.  Patrick’s outrageous rampage actually happens: he shoots an elderly woman in broad daylight, kills two police officers out of sheer luck and recklessness, shoots the doorman of a building that has no security cameras.

For me, the scene where he returns to the empty apartment is the giveaway.  The woman knows about the bodies…  Paul Allen stopped paying his rent, and got evicted.  When they cleaned out the apartment, they found the bodies, but since it was such an expensive building they decide to cover it up instead of reporting it to the police/press and running the risk of their millionaire tenants writing off the overpriced residence a no-go zone.  The line “I think you should leave now” to me signifies “it will be best for both of us if we just put this behind us.”

Growing up in a world where elite politician started wars for oil donors, where  elite heads of inelegance agencies commit multiple perjuries, and elite pharmaceutical industry executives genocides rural American through over prescribed opioids, it makes all the sense in the world that Patrick Bateman’s high social stance would garuntee his crimes would go without consequence.  Just look at the “suicide” of fashion designer Kate Spade last week, why do you think her husband is wearing a mouse mask in his first public appearance since her death?  Do you really think he would do this without her killers forcing him to show that she was a rat?

The long I’ve lived in Manhattan, in the United States, in the end days of western civilization, the more obvious American Psycho’s most seemingly-far fetched conclusive possibility has become.  Therefore, the more I watched the movie, the darker the experience is.  A true classic with a truly top-tier ending!