At all times, the function of art is to bring its audience as close to reality as possible, whether that reality is circumscribed to a certain group, in which its particular culture connects the group to a larger living frame, or by looking at that frame directly, not as members of race, nation or even as humans, but as conscious beings wishing to be more aware of the structure of the universe.

In healthy times, art is seen as necessary for the purpose described above. In sick, decadent times, on the other hand, the situation is drastically different. In times that are ruled by delusion and deception, true art is seen as dangerous, albeit the craft that could potentially create true works of art still exist. Such craft, however, doesn’t reach such heights in most cases, and generally the result is as empty as the values of the time the works were created.

In other words: false art is universally preferred and recognized over true art.

Three genres of music were, at least on their origins and their respective better days, not only true to the strict definition of what art is, but were created as a reaction to the present situation. Those genres are hardcore punk, industrial and heavy metal. These initially were the vehicles in which discontented youngsters with artistic talent and a sharper consciousness which allowed them to view the world in a more realistic fashion could pour their ideas and frustration in sonic form. Hardcore punk took a public-friendly style crafted by marketing and deconstructed it, making it more violent, minimalistic and less rigidly enclosed into a singular form. In the same way, industrial took mainstream music, mixed it with electronically generated sounds and turn that combination into a harsh and cold environment which reminded the listener of the monotonous sound of the industrial machinery that defines our times. 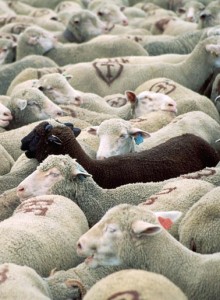 Metal was born into the industrial settings of England by taking rock music and injecting a strong dose of fatalism into it, influenced no doubt by the bleak and dehumanizing surroundings that the first metal heroes experienced. With time, the genre made gigantic leaps, evolving into a nihilistic, naturalistic and romantic artform which splitted from the mainstream forms (the “craft”) from which it initially developed.

Consequentially, those three genres of music are the most hated and ridiculed by the majority of people in today’s society. The fight against these was not only limited to finger pointing, but as a process of assimilation in which the spineless crowd filling the pockets of the mainstream music industry attempted to streamline the genres to make them more tame and accessible.

So, as much as there is false and true art, there is also false metal, false punk, and false industrial, with the proportion of true and false having a certain ratio to it. The struggle for each hessian, then, is to know the true from the false, and how? Easy: recognize that only a modest percentage of metal is worthy of your time; skew the rest; don’t listen to hipsters and other social manipulators; listen and buy only the music you most closely connect to; stay away from scenes: most are dens of manipulation in which the social takes precedence over the artistic, and you will waste valuable time listening to the drivel those people will shove down your throat, so you can be either as “open minded” or “elite” as them.

Lastly, remember the golden rule: if something (music, ideas) is hated with an irrational passion, give it a chance. It may probably be worth something. Be brave, and go against the grain, and you will reach for the best.