Metal, through its lyricism and imagery, and some might say, its feeling, tries in a very obvious way to link itself to the past, whether by telling the story of the armies that fought in World War II or by describing things that happened in a far more remote past time, like events so past us that they become almost mythical. Why is that? As previously commented on another post, metal not only is an alternative to modernity as a way to see and understand life, but its opposite. And that was intended from the very beginning…a rebellion towards what metal artists saw as a complacent world filled with domesticated robots disconnected from their environment. As a counterposition towards that mentality, heavy metal offers an inspired vision of how things were in a past when life was a lot more violent and rougher, and yet strangely, healthier for the challenges it offered daily. We can see that connection most obviously in heavy and speed/thrash metal, but the more compositionally advanced forms of extreme metal aren’t divorced from the idea either. In that approach there is a unique message implied, which is: by arriving to a materially advanced state of civilization in which life is safer, we’d actually done a devil’s bargain – we have completely moved away from doing things that may potentially be hurting and unsafe, unlike those times in which life was violent and challenging and yet, despite that, we lived in a state of connection with nature made by the very things that threatened us each day. 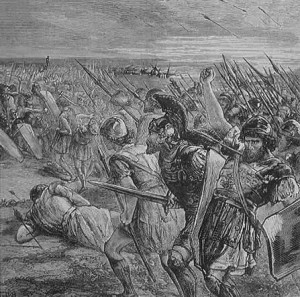 Most of the people living now don’t know how to make a fire or wield a sword because they don’t need to: we got gas ovens and professional armies now, which are certainly great things to have in this modern age, no doubt, but the problem lies in that we have skewed challenges altogether expecting that everything be given to us in a silver platter. In other words: we have domesticated ourselves, and in the process we have lost a part of our souls. Suddenly, life no longer has meaning besides getting new things to make ourselves happy and more comfortable. That’s what metal is against, and by rescuing the past it tries to give us lessons, like a grandfather telling a story of his own childhood in order to communicate an experience we young people might find usable. In the same way, metal gives us, red-blooded people with a thirst for life and challenge, an alternative view to the conformism we see everyday around us.

– A Fine Day To Die, Bathory

Lyrics like the above evoke awful images to most people, but for the hessian, beneath the death, the blood and the fighting, there is a quest for glory and self-improvement and, as modern day warriors, we are able by listening and understanding the music to feel a part of the rush that ancient warriors must have felt. Bands like Manowar, Motörhead, Bolt Thrower, Omen, Dio and, of course, Iron Maiden have brought the past to the table many times for that reason, and many bands have made entire careers out of it. They evoke a time we want to revive in our hearts for daily inspiration. Yet, as romantic our souls may be, we don’t want to repeat the errors of the past as much as we don’t want to screw things up as badly as modern peoples. And this is why metal also takes the idea of evocation further by exploring the mythical world of fantasy. But that’s another topic. In the meantime, let us hessians rescue the past, both through music and books and learn from it so we can be the ancient men of the modern ages. The past lives on us!