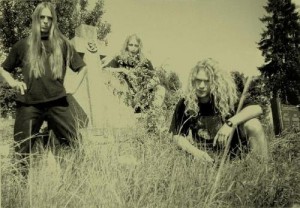 Wolves howl and demons prowl on all sides of the mythical mountains of the Slavic kingdom, and each one of you well knows the quests of glory from Poland, Austria and Ukraine; yet, Slovakia in between, shadowed in behest of the more expulsive, westernizing Czech Republic, remains without any internationally celebrated “status whore”. As usual, this is not because of a lack of intrinsic quality or statements regarding vital manners and occult pathways; reasons are dealing with the superficial and corrupt nature of mankind. Until about 1989, the communist government hated the rock influenced expression as a tool of capitalist destruction, but worst of all free thinking and youthful rebellion, the enemy of all governments everywhere.

Remember our story of the modern day Toltecs? The same archetypes permeate other heirs of great nations now caught as underdogs of globalist forces. Grindcore influenced thrashers in the vein of Protest were the first to give birth to an underground scene (punk was always vital in Slovakia) which reached fruition with the pure olden Death Metal power of Depresy, Nomenmortis and Dementor, some of the best Eastern European death metallers (on their early works) besides Poland’s Vader and highly reminiscent of the unhallowed Finnish movement in style. It would be hard to go into these obscure phenomena any further without the aid of local infiltrators/collaborators and thus we highly salute our friend Namtar of Aeon Winds who compiled us an immersive overview of Slovakian metal through the decades, from the grave exhumations of Apoplexy and Acoasma to the barbarian Black Metal winds conjured by names such as Ancestral Volkhves and the hordes of the UBMR Circle (the Slovakian “legions”). We implore you sustain your disbelief and listen for yourself if you deem interesting the battle-skills of the Slavs.

One thought on “Invasion of Carpathians On Ancient Slovakian Pathways”