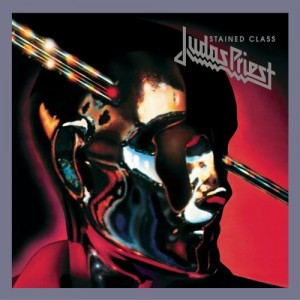 Stylistically and in terms of execution, this is perhaps the most important album that Judas Priest made. Some will argue that the Sad Wings Of Destiny album from 1976 was the record that encapsulated this, though the reviewer picks Stained Class on the basis that it shapes and crafts the periphery of what was yet to come from a still young musical form. The origins of extreme metal are hinted at in pieces such as ‘Exciter’, which elaborates further on the quintet’s advancement towards more aggressive techniques and motifs, heavy on palm muted rhythmic guitar riffs and rapid fire double bass pedals, overlaid with Rob Halford’s banshee-like falsetto and lead guitars which although in terms of patterns and scales are not yet free of the restraints of rock music from previous decades, clearly set a benchmark for the revival of neoclassical technique in the metal genre. This is additionally showcased in both the follow up piece ‘White Heat, Red Hot’  the title track and ‘Saints In Hell’, more adherent to mid-paced tempos though in terms of form, the same development is obvious.

‘Invader’, ‘Savage’, and ‘Better By You, Better Than Me’ are all anthemic, semi-melodic numbers that are more standardized than anything else on this album, and is easily of the quality of the best material that permeated the disappointing predecessor Sin After Sin. As is with much work within earlier NWOBHM, this creates a solid base that allows for the most joyous segments of this album to thrive so well. ‘Beyond The Realms Of Death’ which is by many seen to be a seminal piece for this band, is an excellent piece of balladry, to which a clear lineage of the more subtle, ‘slow burning’ work of Iron Maiden (“Children Of The Damned”), Manowar (“Valhalla”, “Bridge Of Death”), Bathory (“One Rode To Asa Bay”, “Twilight Of The Gods”), Metallica (“Sanitarium”, “Fade To Black”) can trace a root. With the exception of perhaps their triumphant Painkiller opus, this remains their most consistent and advanced work, and shows an act at their most vital and relentless. Metal was forged here.