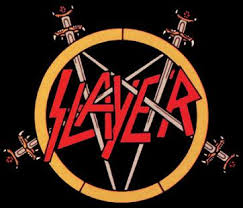 Fighting the conspirations of ill health, amounting to months of delays, the much anticipated return of Slayer to England’s capital was in ominous syncronicity with the most auspicious time of the year for disciples of their church. As the Hessian-led International Day of Slayer falls upon us once again, last week’s early blasphemy proved to be an highly adequate preparation. The Slayer we all exhalt on this site was a mystical entity and their music excoriated the flesh of society’s body of lies and delusions, revealing the inner, beating heart of darkness and measurer of our mortal lives. They were also the progenitors of Death Metal, without whom many of the cults that feature in our catacombs may not have ever manifested with as advanced a template. The heat of the Spring sun, optimal for decomposition, drew the wehrmacht to Kentish Town’s Forum for an evening where the secrets of the dead promised to be revealed.

That, they would be, but not before some distractions within a chronology of events that would befit any highlight reel of modernity’s undoing, beginning with the supporting band from Sweden. The Haunted’s line-up consisted of some familiar faces, not just because they’ve been around for 10 years or so, initially Swedish Hardcore influenced Thrash before becoming the post-At The Gates band of Swedeath-influenced Speed Metal that they’re now famous for. Lead guitarist, Anders Bjorler of past-At The Gates fame, sporting a Disfear shirt in reference to both Swedish Hardcore and former bandmate Tomas Lindberg, launched with the band straight into ‘Bury Your Dead’, a signature track from their second album. Their set would mix old and new with some energy but the only problem from them is that their music sucks. This grammy-award winning combination of cliched galloping, groovy riffs interspersed with familiar and incoherently fragmented bursts of Swedish Death Metal melody, resulting in little to no melodic fluency is made even worse when the newer tracks demonstrate their love of pure nu-metal guitarwork. You know a set is bad when, despite it’s relative brevity and insignificance, every second of tedium feels absolutely unmitigated. They exit the stage with a warm crowd reception behind them but the diabolic concoction of Metal madness to follow boils the venue over with the hellish crepitance of anticipation.

Plumes of smoke veil the scene of everybody’s attention in stages of trademarked descent through noxious tributaries of the underworld. Led by battery commando Dave Lombardo, Slayer finally materialise from amidst the scarlet haze and open with ‘World Painted Blood, rendered near-flawlessy with Tom Araya’s completely static frame being the only, negligible sight to conflict with the fact that they’re still a well-oiled machine. Unlike other bands of such age and well-earned veneration, Slayer at least seem to understand the difference in purpose and spirit between their new and old recordings, rather than just the wear and tear of discographical order and simply ‘mixing it up’. The set was split roughly 50/50 in terms of timing, so there was quite some wait for the veterans to get their nu-material out of the way. The three standing band members would then congregate in a Seance-like circle formation around the beaten kit of Lombardo, ritually manifesting the schism and unleashing the demons of ancient times, channelling the wails of feedback as they did in their youth. Thus, the show really exploded with a rupturous performance of ‘Hell Awaits’ sending the violent hordes into a possessed frenzy. King and Hanneman were in brilliant, conversational form, damned to strike all the right notes and give a real sense of narrative familiarity to the chaotic and atonal guitar solos. Araya’s exoteric shouting was laid to rest and the invoked Mephistopheles conferred upon him sadistic scorn, the true voice of his priestly years, befitting such apocalyptic sermons as ‘Seasons in the Abyss’, ‘Mandatory Suicide’ and ‘Raining Blood’. The opening riff to ‘South of Heaven’ was possibly given it’s finest rendition to date, as the audio technicians menaced the sound with Kali-Yugic siddhis and lava on loan from Azagthoth. The song of the night was undoubtedly the pollutant ‘Chemical Warfare’, performed with as much vigour as on record way back in 1984. The intelligent, layered riff progressions that played out a multidimensional, mythologised communication of death, paranoia and destruction confounded the crowd but struck them hard, with the anthemic, holocaust winds of ‘Angel of Death’ to follow, releasing a tide of hatred and malevolence, and the highly multicultural crowd rose in unison to sing for the benefit of the Aryan race. The band known only as Slayer departed after covering the most recogniseable songs from ‘Haunting the Chapel’ through to ‘Seasons…’, reinforcing the memories of their greatness and perpetuating the echoes of their cryptic, Satanic messages.