Thanks to “Jim Necroslaughter” we now have photos and a full report of the hessian slay-in that took place in Madison, Wisconsin, this past June 6th for International Day of Slayer:

Saturday June 6th, 2009, was a rainy, overcast day in Madison, Wisconsin. Appropriate for the Inter-National Day of Slayer, I suppose. While the rain may have deterred some people (flaky Madison liberals) from showing up that day, the proud few stuck out the rain from 10 AM to 4 PM at Library Mall, in the heart of downtown Madison.

Within 15 minutes of setting up, a random, street-urchin type, riding a bike, stopped by and offered me a hit off the glass pipe he had hidden in his hand – “this is the green, right here,” he said. In the right situation I would partake, but I figured this wasn’t the time or the place, so I passed. I found it funny that this was the first time in my life that a complete random offered me weed – in public, no less. The IDoS brings good karma I guess.

After about an hour, a completely unassuming 20-something year old, came up and asked me, “Is it REALLY the National Day of Slayer!?” We talked for 15 minutes about the best Slayer album (I told him South of Heaven), and metal, in general. I gave him a flyer and mentioned anus.com a few times. He was extremely fun to talk to – a balding, “conservatively” dressed young man that actually knew quite a bit about metal. He was really excited about the fact that it was the National Day of Slayer, and it was clear that he wasn’t taking the holiday as a joke or with a sense of irony.

At one point, early on, I remember two University of Wisconsin campus tours being forced to walk by us – haha! These tours are essentially for high-school kids and their parents who are trying to decide on where to go to college next fall. I’m pretty sure Reign in Blood was playing at that point – perfect!

The next person I remember talking to was a very old man. He was looking at our signs and came up to me and in a thick German accent, he said “June 6th is also D-Day.” I told him we knew that, and he told me a great story about how he was 14 and living in Nazi Germany on D-Day (so I guess that would make him 79, today). He asked me, “What is this ‘metal,’ is it the music you listen to?” I confirmed that it was, and I told him I also listen to classical. He asked me, who is your favorite composer? I told him Beethoven. He seemed very pleased with my answer, and said something to the effect of: “Beethoven makes you think that the entire universe was created just so that Beethoven could exist.” The old man was a pleasure to talk to, especially with Hell Awaits blasting in the background!

Let’s see. I remember an older woman (must have been 40) coming up and taking a flyer. I remember an older couple (around 40 or 50) coming up and hanging out for about 10 minutes – the wife seemed to know her Slayer pretty well, all things considered. A group of young African-American men and women stopped by for a few minutes and chatted us up, took a few flyers, and seemed pretty amused about the whole thing. There was a church about 100 yards away and sure enough, there was a wedding that day. A few of the groomsmen walked by at one point and raised a beer. At one point, I remember explaining to a man why Slayer was the perfect spokesband for metal – they are popular, but not total sell-outs, essentially. Nat’l Day of Darkthrone is too obscure, but Nat’l Day of Metallica is too HIV positive.

The best group of people that stopped by was a German family (more Germans!). They all had accents but they essentially spoke perfect English, I gathered that they live in America or visit it a lot. Anyway, the mom and dad stood back and had huge smiles on their face. The two sons and daughter were REALLY excited about our set-up! They said this was the best thing they had seen in months, they loved our signs (the daughter especially liked the “No Hipsters” sign), and took a bunch of pictures. We talked for probably 20 minutes; the one son really knew his black metal – he opened up his wallet and showed me his old I.D. from Deutschland. He said, “this was when I was 15 and had long hair – I used to be a sinner!” Pretty good line, I thought.

All in all I was pretty surprised at how we attracted a pretty diverse crowd – men, women, black, white, German, young, old, long hair, balding, street-urchins, groomsmen. At the end of the day, I realize that some people who stopped by probably thought we were being ironic, and to some extent, I know that we attracted some hipster-types. But I know I made some contact with some authentic people who will hopefully, ultimately, check out anus.com.

Improvements for next year:

– Red dye for the fountain in the middle of Library Mall.

– A goat chained to a tree

And some pictures of the gathering (click to enlarge): 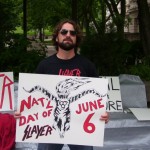 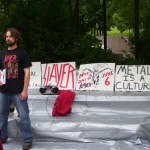 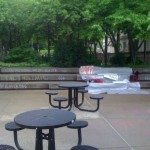 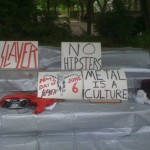 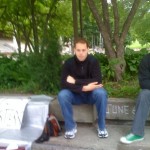 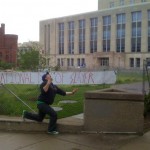 We at the Hessian Studies Center would like to congratulate the few, but brave ones that took this initiative for activism and showed local people that hessians are a group aware of themselves and that metal is a valid subculture. We also thanks Jim for his detailed report on the gathering and extend our kudos to the old man for his profound saying on Beethoven‘s music.