Guitar distortion is a fundamental asset of metal music. Yet it also has a great disadvantage that represents a big limitation to musical composition: it doesn’t give much of a dynamic range, like an acoustic instrument or an electric guitar on the clean channel do, which doesn’t open possibilities for a greater range of expression and subtlety.

For those unfamiliar with sound theory or musical concepts, dynamic range means variations in volume and emphasis in sound. In developed musical genres, such as classical, the concept can make a difference in the expression of a certain piece: for example, a nice melody played “piano”, or soft, can sound sweet, while another played “fortissimo”, or really loud, can sound powerful and bombastic. It is really a means to drive the point across, to enhance what a certain piece tries to express.

Thinking about this problem while surfing the Internet, I ran into this: 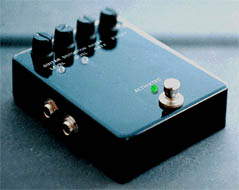 This device restores the dynamic range which is lost when an electric guitar is played through a distortion box. It employs precision analog multiplier circuitry which samples the raw guitar input and varies the distortion box output accordingly

Probably not an optimally functional design, but the idea itself is very good and, if perfected, can open a whole new future for the modern music world and to metal specially, giving the style brand new fields to explore and expand. Instead of constant, all-out aggression, metal musicians could be allowed to explore subtlety and different moods, giving metal more emotional range. The possibilities are quite interesting if one thinks about them.