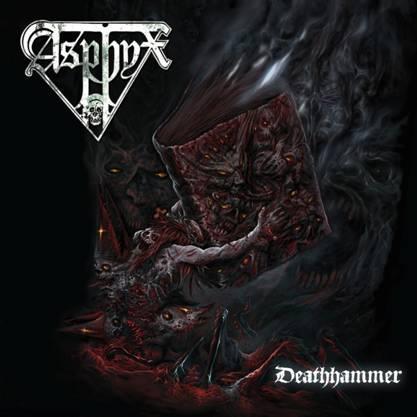 The time has now come to unveil the stunning artwork for “Deathhammer”, crafted by longtime parther in designs, Axel Hermann (http://www.axel-illustrator.de/). Hermann has not only worked on all of the early ASPHYX artworks and most recently on their “Live Death Doom” release, but is also responsible for many of the classic Century Media artworks by bands like Morgoth, Unleashed, Samael or Grave. Here is how both parties comment on their newest co-operation:

“ASPHYX and Axel Hermann is a fusion that has always functioned perfectly…from the days of ‘The Rack’ back in 1991, ‘til ‘Deathhammer’ in 2012. Like others such as Dan Swanö, Axel may be considered as an external member of the band and when we asked him to do the ‘Deathhammer’ cover – and as usual we would leave him free in his expression – we were very pleased to hear he was willing to take it on.

…And the man has exceeded himself! To the perfect death metal album comes the perfect cover that still leaves enough to everyone’s imagination. We hope he is as proud as we are on the final result. It seems all falls into place for this deathdozer of an album. I guess Axel can expect an offer from Le Louvre any time now.”

“A cover is the visual extension of an album that translates music and emotional intentions (or should I say aggression) into a clear statement of what to expect before taking the record off the shelf. In seldom cases you’re ending up with two perfect sides of the same coin. With ASPHYX and myself it has always and luckily been that case. And I am really proud of that! Show ’em Death and hit them with a hammer…visually and musically! Guess, we flipped the coin once more!?”

Recorded at The Mörser Studio as well as at Harrow Studio with their longtime engineer Harry Wijering, “Deathhammer” was mixed and mastered in Sweden by Dan Swanö, who previously worked with the band on “Death…The Brutal Way” as well as on the “Live Death Doom” release.

Prior to the upcoming album’s release date, ASPHYX will still perform a very special “full album setlist” concert at this year’s Eindhoven Metal Meeting on December 16th, at the Effenaar club in Eindhoven, The Netherlands, where the band will be playing their complete “The Rack” album for its 20th anniversary of release. Additionally, ASPHYX have already been confirmed for the 2012 editions of the ExtremeFest, July 5th to 7th in Germany, Austria and Switzerland, as well as the coming edition of the legendary Obscene Extreme festival in Czech Republic on July 14th. Here are all the band’s upcoming confirmed shows:

Ray Miller from Metal Curse has pulled off a massive video interview with underground longtimers Cianide, who specialize in primitive but brainy doom-death with strong Motorhead/Hellhammer undertones. In it, they discuss metal, the truth of the old school, the cluelessness of the nu-skule, and the complete inability of modern society to conceive of anything so packed with potential as death metal:

Sam Dunn gets browbeaten by his producers, who want more money through more accessibility:

Dunn: One that really stands out to me was nu-metal, which emerged in the ’90s and was this subgenre that explored hip-hop and included turntables. Guys in bands like KORN and LIMP BIZKIT and LINKIN PARK didn’t look metal. And I honestly despised these bands at the time. But in doing the episode, I learned there was some value in what those bands brought to the genre because it tested the boundaries of heavy metal. Part of the charm of metal is the musicians’ and fans’ commitment to the music and the sense of community. But the downside is that can become pretty exclusive and even elitist at times. The nu- metal episode made me realize adding a seven-string guitar and bringing metal back to some sense of groove — which it really hadn’t had since LED ZEPPELIN in the ’70s — maybe wasn’t such a bad thing. Just because I’m a crusty, thrash-loving metalhead from the ’80s doesn’t mean I can tell LINKIN PARK fans their music isn’t important. – Blabbermouth

There’s a good reason metal left those things behind: they belong to rock.

Rock is a broad, accepting, really indistinct thing. It’s an amalgam of folk, country and other popular musics derived from them. It distills them to the absolute basics and removes all meaningful musicality through use of the key-neutral pentatonic scale.

Rock assimilates things. It makes them into an average, a mundane norm. For all of its bluster about accepting those who are different, it doesn’t like different — if it deviates from the lowest common denominator, crowd-pandering, simplistic music.

Metal was a breath of fresh air.

Dunn’s purpose seems to be (and this is quite intelligent of him) to group all of the newer music into nu-metal, which is accurate. Nu-metal is metal with swing, basically inherited from angry hip-hop. His point is that even if it’s underground, if it’s metalcore or indie-metal, it’s numu.

And that’s a lesson we can all use.

News of the actually interesting:

They are regarded as the pioneers of Vedic metal. And their fans across south east Asia and the Indian subcontinent are of the opinion that there is no better way to learn about the Mahabharata than by listening to this trio’s death metal-influenced renditions of shlokas. Singapore-based band Rudra is now all set to round off the year by playing on the final day of the Times of India Strawberry Fields 2011 on November 27 at the National Law School of India University.

Kathir says that the responses to their music, especially the Sanskrit lyrics, have always “been positive”. “In fact, we found that people love the exotic sounds of Vedic metal and the vibes of Sanskrit chants. It is, of course, a weird combination, given the fact that Sanskrit is a liturgical language. However, such a fusion can create an aesthetic experience if one were to suspend judgment and listen without prejudice. And that is exactly what has happened in all our shows,” he says. But how relevant is Vedic literature today? “Very relevant to me, especially the philosophical aspects of it. I’ve been a student of Vedic literature for about 18 years. And over the years, I’ve discovered so much that has helped me deal with life’s challenges. Of all the Vedic texts, I love the non-sectarian perennial teachings of the Upanishads,” he reveals. It’s been 10 years since the band released their landmark album, The Aryan Crusade. Since then, there have been several lineup changes – Rudra started out as a quartet, but is now a three-member outfit – but that doesn’t seem to have affected the band’s evolution. “We have released albums since then. More importantly, we have pushed the boundaries of being a metal band by fusing Indian dance with our performances,” says Kathir. – Times of India

This is epic pagan metal!

I’ve seen this a lot:

I have tinnitus and hearing loss from my rock and roll drumming days. It’s no joke. It never goes away. I have major sleep problems but it’s not because of the tinnitus. In some ways you can learn to ignore the constant noise or hum or …sound, but the worst park is getting up in the middle of the night when all around you is quiet and the hum or hiss ruins the experience. The same for being in a quiet forest or natural setting when you want to hear the forest sounds and the hum persists. I know other people with tinnitus and one of them says that if there was one thing in their life that they could change, it would be to be tinnitus free. Two friends got it from being in the military in Vietnam because of various weapons or ordinance detonations. Many rock musicians have tinnitus and hearing loss because of loud music. I think current musicians may have better hearing protection now, but not all. With some musicians, it’s a macho thing to play it at 11. Being in a loud restaurant with friends is a drag because I can’t understand much of what they’re saying. If you’re playing loud music, going to concerts or firing weapons, use hearing protection, you’ll be glad you did later in your life. Tinnitus is a total drag. – Gary Reams

Especially when firing guns at fleeing protesters, or burning churches in the dead of night, wear hearing protection! You’ll thank me as society implodes. 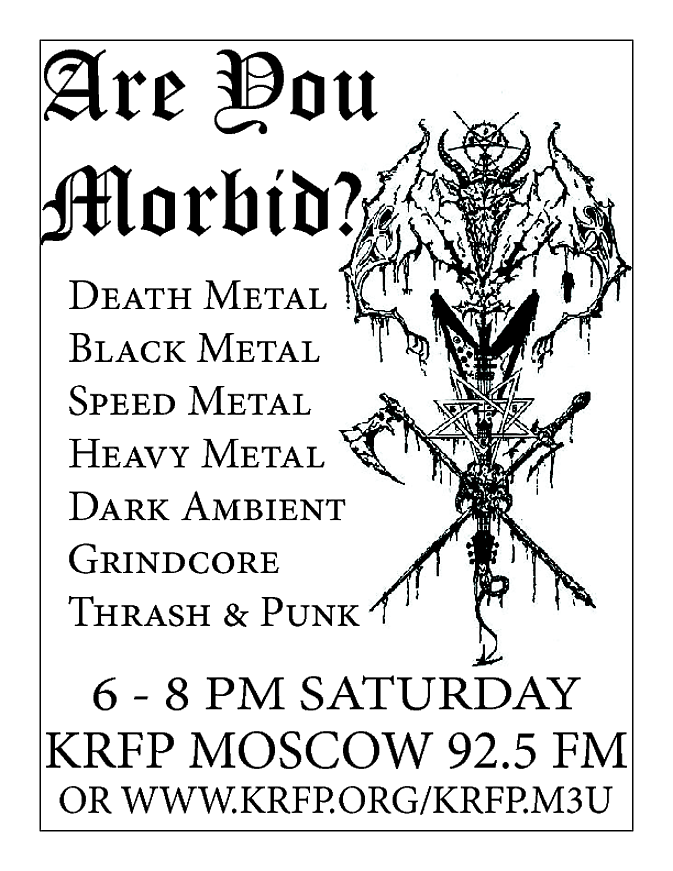 Meet the podcast: Oldschool metal and dark ambient, with acerbic yet cosmic commentary.

Only 15 euros via Paypal directly from Paul Speckmann.

Not by us, but informative:

H.P. Lovecraft, Edgar Rice Burroughs, J.R.R. Tolkien, R.E. Howard are my favorite writers. Their writings had a huge influence on my imagination when I read their books as a child. They fueled my desire for truth and for discovering ancient beliefs. They inspired me with ancient pagan myths and beliefs. They inspired me with desire of knowing the past forgotten and of searching mysticism and spirit of ancient civilizations. Inspired by such spirit you discover that studying the past is the same rich and satisfying as work for the future.

Still on delay, status is as soon as we have the layout and master this is going to press. I had hoped that it would have been here early this past week to go to press. Figure for a 3rd week of December release for this until I can give a more solid date. Thanks for everyones patience with this new album and of course all those who pre ordered and has yet to. – Forever Plagued