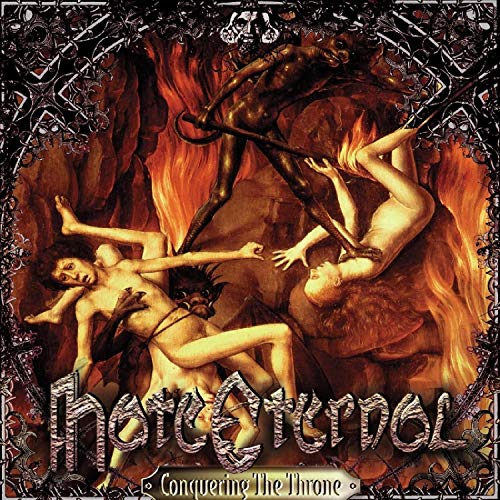 Three songs were co-written with Doug Cerrito on this album: “Nailed to Obscurity”, “Dethroned”, “Spiritual Holocaust”. Tim Young’s style was already fully developed here as his ability to ruin any song is on display as all he does is follow the tempo and then blasts away with complete disregard to what is going on. He shows a great number of blast beat variations but these are always executed with an aura of pretension rather than a willingness to accentuate certain qualities of the music. This had the tendency to obscure a lot of the distinctive Suffocation riffs.

While the immediate comparison to those three songs may be Despise The Sun, they are in reality more akin to the compositions shown on Pierced from Within. As on the former the band condensed their ideas to much shorter individual phrases that didn’t have the same space to evolve where as the latter is composed of long phrases spanning multiple bars that constantly shift and turn like a genetic mutation. “Dethroned” attempts this and succeeds on a smaller scale but is never given the necessary time to achieve this as the short song length doesn’t allow it. “Spiritual Holocaust” sees a true flash of greatness as Rutan allows Cerrito complete control towards the end but the song lengths and the arrangements never give a sense of finality to these songs. suffocation’s penchant for the percussive is on full display but through a much smaller scope that often reduces this music to Pantera like grooves. The main collaborative effort between the two composers is the combination of Rutan’s derivative Morbid Angel styled tremolo picked riffs and Cerrito being forced to play the three note breakdown that feels like a truncated Suffocation melody that just supplements the boring Rutan riffs.

The Cerrito riffs on the individual scale showcase the combination of diatonic tonality, dissonance and chromaticism that made Suffocation’s melodies so twisted and that flirted between the brutal and the otherworldly. As basic two note chromatic motifs eventually resolve into angular harmonic minor melodies through a large number of short steps that makes the transformation so natural that it would be easy to mistake them for new undiscovered notes. While there are many short instances of this, it seems that Erik Rutan forces interjections of banal motifs that convey nothing but the desire to headbang aimlessly which squanders the potential of all the previous build up. Where Terrance Hobbs knew how to inject rhythmic intensity into Cerrito’s melodies, Rutan on the other hand is only capable of adding chromatic descents on the deepest octave of the guitar. This does allow the music to mesh with the other songs by forcing a similar set of motifs upon the better riffs or the buzzing main melody on “Dethroned” that is somehow superposed on top of a much better riff.

Arrangements follow the cyclic pattern where the introduction is both the climax and the outro and then the middle part is a collection of random riffs that leads towards the “shout the song title” passage. The collaborated songs stick to this mold but the introductions and the endings are within the riff maze style as they progress but then the core of those songs follow the basic Hate Eternal formula. This creates fleeting moments of greatness caught within a sea of mediocrity that is likely to fly over the listener’s head with the constant pitter patter drums as they all go nowhere. The three songs can be described as being essentially: Interesting idea slowly develops –> headbanging part –> develop similar idea to the intro and then end to keep with the short length of the other songs.

Hate Eternal and Suffocation’s careers have lost any meaning since the great guitarist left both bands though Hate Eternal’s never had much of a meaning in the first place. The following albums would closely mimic what is shown here but with more and more Modern metal influences. Suffocation succeeded because Doug Cerrito’s contributions were at the heart of their compositions while in comparison Erik Rutan failed because he was unable to recognize the superiority of his colleague’s methods. Suffocation and Hate Eternal continue to make uninspired Death metal while Doug Cerrito has never sullied his legacy and has moved on to hopefully better things in his life as he decided to stop when his heart was no longer into it.

“Yes, I think it is unfortunately true that this reunion will happen. The reason why I say ‘unfortunately’ is that I believe it is all for the wrong reasons.

“Back in ’98, Doug Cerrito, the original guitarist of SUFFOCATION, and myself made the decision that it was time to end SUFFOCATION. We were not going anywhere new and the amount of stress and conflict between the members was at its highest levels. So instead of continuing we decided that it was best for the band to end it. This way, SUFFOCATION ended with pride, love and respect for the members and the music.

“SUFFOCATION was to date the best thing I — and I can pretty much speak for the rest of the guys — the best thing we have experienced in our lives. [However] there was a lot of mismanagement [that took place that hampered our ability to grow and be taken seriously by the music industry]. We were young kids and knew nothing about business, so a lot of mistakes were made. We had really bad management, [and] nobody in the business respected us because of that. Put it to ya this way: Our manager would call [then-label] Roadrunner [Records] and ask for tour support, and [former Roadrunner Tour Coordinator] Scott [Givens] would laugh at us because [of] how pathetic our manager was.

“Anyway I’m running away from the topic here… I love what I did with SUFFOCATION and I’m sure the rest of the guys feel the same way. There is one thing though: Do you think they listen to anything remotely [close to] death metal? NO! They are doing this to fill a personal void in themselves and nothing more. None of them have done anything [in music] even somewhat successful since SUFFOCATION. If they had, they wouldn’t give a rat’s ass about doing this reunion.

“And another thing… I don’t mean to talk shit, but who is going to be able to play my bass lines? Josh? It’s not going to happen. What about the drums? And in no way do I discredit Mike Smith, because he was one of the main reasons of me joining SUFFOCATION in the first place, but the stuff on [1995’s] Pierced From Within and [1998’s] Despise The Sun [EP] [which featured Doug Bohn and Dave Culross, respectively] — he just isn’t that kind of drummer.

“Now we come up to Frank Mullen, who, personally, I think is a great guy and friend, but he really hurt the band because it was not number one in his life — it was his wife and family, which I think he’s a great husband and father. God knows I wish my father felt for me the way Frank feels for his kid, but the band was 3rd or 4th [priority] in his life and that depressed the shit out of me then. He was not able to tour or do certain shows because of the wife and his job. Now he is divorced and wants to reunite SUFFOCATION. What if everything was going great with his family life — would he still want to do this?

“As far as Terrance is concerned, all I can say is that he is an amazing musician and just loves to play his heart out.

“Doug and myself are really upset that this reunion is going to take place for the wrong reasons. If the guys were really sincere about doing this, because they followed their hearts, that would be one thing. But I believe they just can’t stand sitting at home and want to make a little amount of cash, and I mean little, [by reforming the band]. I just don’t want the best thing to date in my life to be disrespected.” Chris Richards

18 thoughts on “Doug Cerrito and Hate Eternal – Conquering the Throne”