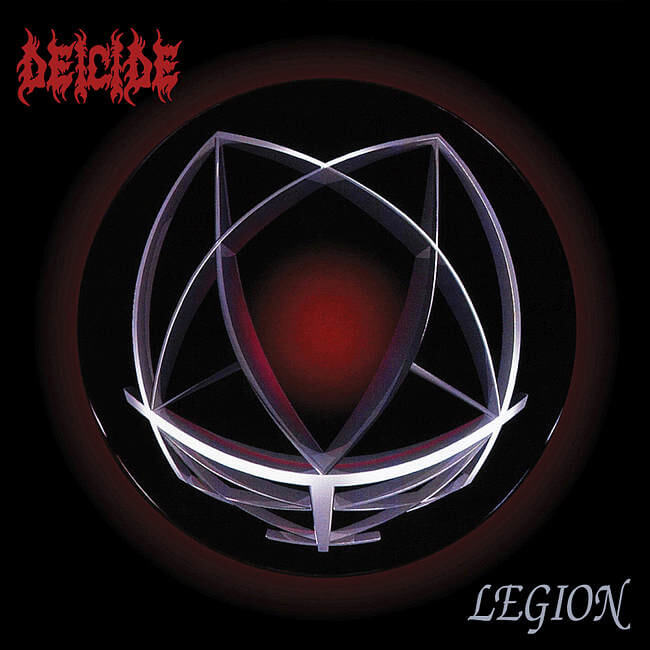 Instead of chord progressions that insinuate that there is an underlying harmony consisting of chords, here it is not possible to establish any form of harmony and this forms a sequence where each note has its own role tailored by the band.

Let us look at this three part riff.

The first melody is comprised of a four note chromatic descent that is played twice before shifting down a semitone and repeated twice to continuously build tension. While simple the sheer ferocity leads perfectly to the ensuing madness.

For comprehension purposes it is better to imagine this melody in pairs of chromatic notes. the first pair introduces the idea as it then jumps up to a fifth an octave above. The same two notes are repeated an octave below before the second part of the sequence is repeated a semitone higher. The sequence shifts up a fourth but ends prematurely to fit within the bar. The final melody follows the same logic without the octave jumps before ending on a consonant minor scale motif finalizing this idea and giving it clarity.

This sequence can be summed up into the following algorithm:

1.Introduce with a two note chromatic descent
2.All notes are followed by the following note a semitone higher.
3.Jump up to a fifth an octave higher.
4.Descend an octave.
5.Repeat but a semitone higher
6.Replace “1” with a single note
7.move up a fourth.
8.repeat whole process while omitting all octave jumps.

Pi was written and recorded only a few days before the completion of the Master copy, at around 10 am, with a couple of serious hangovers. Justin and I had talked about having a classical guitar intro into some sort of heavier riffage, but we weren’t quite sure what that was exactly going to be.

We remembered back to a few weeks prior, when we were throwing around an idea of using the mathematical constant Pi, and incorporating it into some sort of complex breakdown pattern where the kick drum corresponded to each number as the figure progressed. Kinda creating the ultimate mind boggler of a riff. The complexity of the intro is often overheard, because it’s hard to discern what is actually going on within the track, UNTIL NOW!!

Here’s a breakdown of the….um, breakdown, in the intro to our album, “Pi: The Mercury God Of Infinity”

The actual tempo is 120 beats per minute (bpm). You can hear this by listening for the closed hi-hat that is panned left: it is playing constant eighth-notes.

A crash cymbal accents beat one of the first measure in 4/4. It is repeated every four measures.

Now this is where it gets tricky: the china cymbal.

It’s hard to feel the breakdown in Pi at 120 bpm, and this is mostly due to the china cymbal, which is playing a 4 over 3 (4/3) dotted-eighth note ostinato that begins on the “E” of one.

Check it out: A quarter note is equal to one beat in 4/4 time, but so are two eighth notes, or 4 sixteenth notes. It’s all about subdividing note values.

So when I say the china starts on the “E” of one, I’m referring to the spoken counting value assigned to the second 16th note in a quarter note duration.

A dotted eighth note is a duration of three 16th notes, an ostinato is a persistently repeated pattern. Basically, the china plays on the bold-capitalized letters:

Starting to get it? Cool.

At last, the reason Pi is what it is: the Double-bass pattern.

The formula of Pi for the kick drum was pretty far fetched at first, but seemed to work well once the track was finished. The numbers and rests in the formula translate to 16th notes on the kick drum, and 16th note rests. There is no kick drum beats where there are snare drums. Sooo, here it is:

Now, your decimal lies in between the 4 and the 1. So, following the formula, you move one point to the right of the 1 and insert one 16th note rest. There are no numbers to separate with single 16th rests, so you move onto the next number, which is 5, and follow the same instructions.

That’s all there is to it! The formula extends out to 71 decimal points.

While the first sequence is simple and redundant from an algorithmic point of view. The second in comparison is complex and creates a rhythmic pattern based on the human understanding of various phenomenon. In reality “Pi” is a predictable breakdown that masquerades as a song, offering no content beyond instrumental acrobatics. Were it not for the description it would be impossible to notice that this is anything different from the millions of other Jazz influence Metalcore bands in existence.

The first sequence works by sticking to an internal sense of logic that can truly be felt without having to think, which is what constitutes the best of metal. Raw emotion canalized through basic rules that can be felt by any human without any mathematical fluff or other. The small twists and turns may seem clunky and superfluous on paper but are completely coherent for the listener as the human condition is not made from pure logic but a guiding narrative with many exceptions.