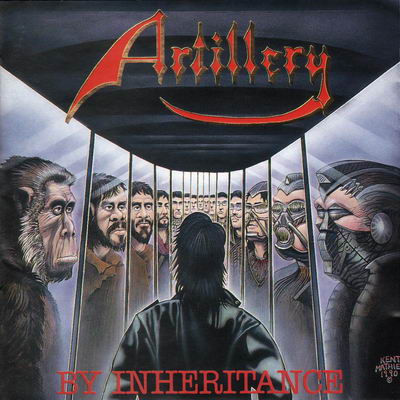 Flemming Rasmussen shows why he was the de facto producer for metal’s biggest band: Metallica. The drums pierce through the mix easily while keeping a natural though slightly dry sound where each hit is perfectly heard and understood. The guitars dominate the mix with a full sounding natural tone that has agression but places emphasis on allowing each note to be heard. The scooped tone that Metallica popularized but with less presence and more precision that relies on the bass sticking close to the guitars to add the necessary weight. The various solos and clean guitars are well heard without ever drowning out the other instruments. On top of this the vocals which are performed by a tenor who uses a throaty scream somewhere between head and chest range. A very controlled scream that is often backed with harsh shouts that sometimes border on growls. The scream though is completely tonal and well controlled as seen by when the singer transitions to more traditional forms of singing.

Here lyrically the band attempt to tread on new territory by tackling subjects like equality, delinquency,intelligence and general success. though the mastery of the English language is lacking and some of the metaphors are quite strange, the band are able to bring such ideas to life through the extended rock arrangements. The themes go through thesis,antithesis and synthesis. The lyrics deal with the insanity in Iran caused by Ruhollah Khomeini to highlight general stupidity and the systematic obedience of the masses before taking the role of an average person judging a criminal from the moral high ground. Then on “Bombfood” the narrator criticizes the fantasy and sheep like mentality that the average citizen shows towards the army and then on “By Inheritance” tackling the greed and narcissism that corrupts the elite of any group of people. After showing the problems within each division of society the band urges the listener to forge their own opinions through facts and reason and to not automatically trust those with authority.

The album then shows the prisons that all individuals live in and that without education and culture we are equal as children before showing that differences occur when our ability to learn defines our role within our groups. “Razamanaz” is a fun cover of Scottish Hard Rock band Nazareth that breaks the seriousness of the record until we are graced with the ethereal opening lines of the grandiose “Back in the Trash” that concludes the album on all levels. Following from “In the Trash” from Terror Squad (1987) the narrator goes through the process of being stuck in the previously aforementioned shells and that only through persistance and a will of steel can one begin to imagine escaping their situation but that it is very easy to reach the lowest points as humans are far too accustomed to failure and then resort to only living day by day as those around will not help. This whole album expresses the stoic belief that as much as we are all subject to forces beyond our control and that we each struggle with our own limitations, in the end each individual is the master of their own story and that all blame and success depends uniquely on the power of the individual himself

In Speed metal, the riffs emphasize rhythm first and then add a melody after the rhythmic phrase is played. Artillery avoid such obvious pitfalls by allowing the melody to be integrated into the rhythm either through constantly changing root notes or like Suffocation would do a few years later, incorporating the melody into the syncopated sections. rather than sixteenth notes followed by staccato power chords, the Stützer brothers and co would prefer long streams of alternate picked notes and the occasional static power chord charges or the standard plodding Heavy metal riff. Often the band will combine these rhythms with beautiful chorus drenched melancholic passages adding gravitas and merging effectively with the distorted riffs due to being confined to the same musical and not playing with the rehashed gimmick of the beauty and the beast trope where both sections are unrelated and pasted together. When playing these long streams of notes the drums tend to accentuate the strong beat so that the listener can easily follow the underlying pulse. Embellishments in the form of artificial and natural harmonics are frequently used and integrated into the heart of the melodies adding suspense and tension. The harmonisations that occur between the Stützer brothers avoid the stacked triads approach of Iron Maiden in favor of a more pronounced Middle Eastern feel with fourths, diminished and augmented sevenths. The band tends to use harmonisation as a way of introducing a central melody that will then form the basis of following melodies. Though the band are given the “technical” prefix as part of their style, never does this record feel gratuitous and the band have no issues with just holding power chords for whole bars when the situation arises. There are no extended instrumental gymnastics or obvious displays of virtuosity that would become associated with such musically stunted sub genres. An incredibly rich tapestry of different melodies color this record’s somewhat limited arrangements and expertly display the number of ideas this band has in coherent form.

The band show no influence from extreme metal and work within the extended pop format that Artillery use a base to twist and turn which allows for the band to chain multiple riffs together in verse, choruses and bridges before climaxing on a final iteration of the chorus. There is a certain sense of progress as the first chorus will generally lead into a slightly modified version of the second verse that tends to build tension and contains more urgency in its relative instability. Artillery follow the tradition of playing the final chorus twice but will lead onto the final iteration like a climax as can be seen on “By Inheritance” when the harmonized comes in full force to reintroduce the chorus at the end. Though on other occasions the band undermines the importance of the chorus on songs like “Equal at First” which accentuates the haunting verses and then seeks to finish on a fairly emotive guitar solo. “Back in the Trash” follows the Mercyful Fate tradition of extending the standard arrangement to the point of being unrecognizable and allowing the dialogue between the riffs to take precedence as each riff has no predefined position and deciding to attain a conclusion through a breakdown that lead to the intro. “Life in Bondage” flips the arrangement on its head by blasting through as quickly as possible through the verses and using a form of arrangement that would then define the rest of the band’s career. Making the bridge the central piece of the composition as the tension is pushed to its limit and goes through a miniature Death metal riff maze that achieves its summit as the brothers alternate guitar solos that never cease to amaze through their ability to further express the emotions released by the riffs and ending on a previously introduced melody to bring tension towards the final chorus. Through the manipulation of the cliched pop format, Artillery still manage to maintain forward momentum in each composition and never allow the listener’s ears to become complacent in their expectations. 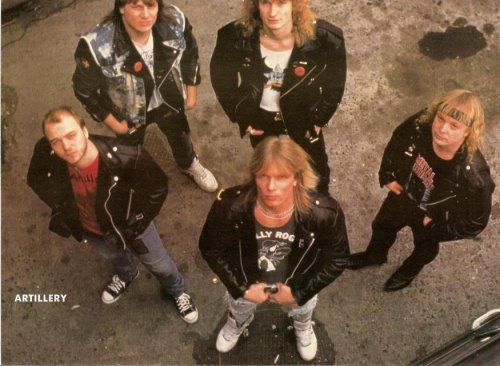 The melodies exist within the harmonic minor, minor pentatonic and at times the double harmonic scale. The band utilize various arpeggios especially in the harmonic minor scale and use more powerful harmonies that are impossible with the natural minor scale due to its incompatibility with certain chords of the scale. The melodies tend to be longer than what is the norm for Heavy metal based music that contains no Extreme metal influences. Artillery never seek to resolve by returning to the tonic but rather minor thirds or seconds so that the succeeding riff fits much more naturally. The band at times will carve the simpler melodies from the first few minor scale notes which is standard affair in the genre but will then look to build open with all the notes that fit in such scales and show no fear in going up or down octaves in search of more intervals. Shifting tonal centers that take form in the various modes of the harmonic minor scale allow for greater expression while keeping the note selection intact. The solos rely often rely on the minor pentatonic as the band refuse to drop their blues rock baggage which can be distracting but thankfully these moments are mostly kept at bay or used within a greater context in the solos. The band give homage to their exotic influences better than any other metal band in the history of the genre as the melodies are never forced into sounding oriental for the sake of a gimmick but because Artillery understand the music and acknowledge the limitations that western instruments provide when attacking such melodies and never search for the most cliche melodies that are known thanks to Hollywood.

Artillery have reached the summits of what Heavy metal had to offer in the Speed metal format without transcending the boundaries into what the underground truly had an offer. Artillery rejected the underground due to belief that they would achieve fame as seen by drummer Carsten Nielson refusing to play in Bathory when asked as he thought that Artillery would surpass Bathory. Despite their shortcomings Artillery’s

16 thoughts on “Retrospective : Artillery – By Inheritance”