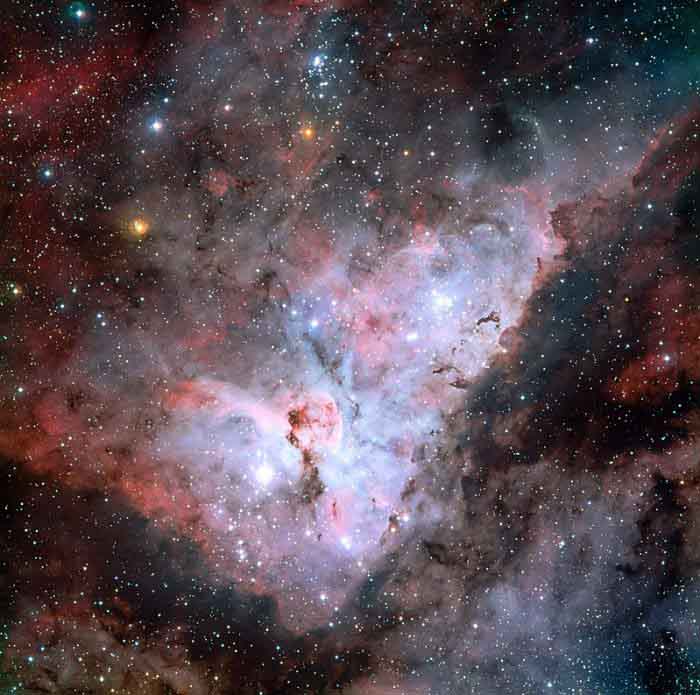 Desecresy Towards Nebulae release completes their previous The Mortal Horizon by putting together a more organic form of a ritualized fine-pointed death metal with cosmic themes in sound and word that they summoned. The importance of the Finnish project lies in its hermetic and monolithic aspects. This extends to both musical and lyrical style as well as choice of theme. Everything done under the banner of Desecresy in their four final albums comes under a very distinct and singular image and purpose. Musically, we hear slow and short melodies that float the rest, mid-paced death metal riffs purposefully cut into short rhythmic shapes that mirror the melodic sense of flow above them, cosmic cult drums a magnetized bedrock that raises the instruments’ soundwaves rather than a battering ram for our ears, and vocalizations seeking to imitate echoes of inhuman whispers as heard not from ‘other dimensions’ but from the kosmos humans have made a habit to ignore. Each of these are allowed to grow within very fine stylistic lines, the strictness being almost stifling to the possible changes, yet the constriction was worked into a blossoming array of austral lights shown across a cold cosmic landscape. The constant sense of suspension and movement that evokes an unearthly sensation by dint of the slight disjunction among its several coordinating parts is sensed as a traveling where any direction and position is the same, as if being at once at the center and at the edge, eternity and infinity, the here and now united to to all developments at once and all pasts comprehended as requisite and thus alive at this single point. Desecresy achieves this while taking a completely traditional approach. They have built pathways to places, shown us possibilities, where others seem intent on repeating tropes which, while valuable at a point in time and development, are by now redundant and devoid of life.

There are works of literature which will further bring to life what is pointed out in relation to Desecresy’s music and words. The first, Kenneth Grant Cults of the Shadow, is recommended as a way to link our present to the distant past. Whether the objections made to the ideas contained in this volume be academic or historical, most reading this will be doing so out of reactionary ad hominem, the value of mythos again being lost on them. Cease the modernist cynical drivel in your mind and explore. In this work Kenneth Grant proposes the origins of human magickal mythos to lie in cults that took to star-gazing as the starting point of our mysticism. The implications of this are manifold, though the author leaves the speculation at a minimal, stating that humans later moved on to observing the moon and the sun because they were more precise methods of measuring time. This does beg the question of why the stars would be the parting point, if the stars are definitely not easier to observe than is the sun or the moon. Also, the parallel with the Tolkien myth of the incipient elf race gathered around the primordial lake adoring the beauty of the stars above them as their only light source, is curious to say the least. As Grant moves through history and the development of belief and magick along decidedly Magian lines of interpretation, the Hessian reader must exercise patience and discernment.

In the past, I have personally pushed aside certain works of occultism in the view that high-grade philosophy has more to offer us. In time, I have come to understand this was like rejecting the lessons of Slayer South of Heaven, because one could be instead listening to Ligeti’s Requiem (an awesome complement to Desecresy’s cosmic death metal work, by the way). A judging of character and of practical applications led me to read a work of experimentation, an invitation for each to walk in their own terms given their character. One finds in E.A. Koetting Works of Darkness, a minimal and straight to the point instruction manual entirely bent on operation, even if some of its phrasings verge on the sensational, and provides ample room for imagination and improvisation. And even when such sensationalism does pop in, it has a purpose, though not everyone might discern this purpose. Furthermore, there is no wasted space, and each knowledgeable reference to either magickal treatises (kept at a bare minimum) or Vedic lore is brought forth by necessity and in concert with each subsequent applicable concept and method. It is both basic and deep in its scope, comprehending method and information suitable for both one who does not know how to even descend into a trance-like state of mind, and perhaps useful enough in its sharpening of outlook and method to propose applicable refinements to more advanced practitioners. For those interested in the exploration itself, in the bending of perception and bifurcations psychological and otherwise, this is a personally recommended tome.

Finally, to obtain the hammer to crush the ranting shortcomings of Kenneth Grant into essentials and mythic relevance applicable to experimentation, and to augment the razor sharp pragmatism of E.A. Koetting, Nietzsche’s Twilight of the Idols must absolutely be digested. Nietzsche is the supreme illuminated dancer and judge, as a Loki or a reflection of Krsna, enraging the moralistic, taunting the cynic, and deeply aware of the dark beauty he manifests.

10 thoughts on “The Meaning of Desecresy”