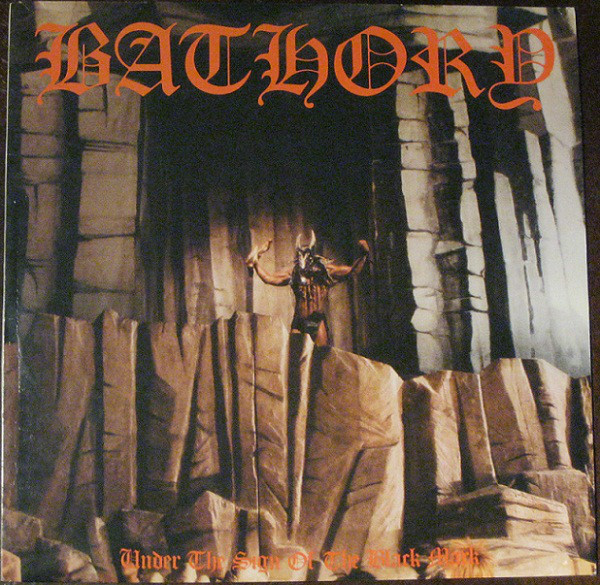 This article attempts to pseudophilosophize on religious awe and its connection to black metal through the analysis of two songs that are connected beyond time. Herein, we shall Enter the Eternal Fire and Walk the Infernal Fields in pursuit of the archetype of the first romantic hero, that is, Satan.

The unfinished first riff, A — considering incomplete for lack of a cadence of finality — calls for overture, and the bells of hell answer in awe: a perfect vision of power and beauty unfolds. The classic sound of bathroom echoes in this Bathory classic creates the illusion of depth and vertigo, as a clean guitar arpeggiates over the Major hymn.

And then, with the last chords of the first bridge, we fall from the grace of the root note to a new tonality. This note, by being lower, creates a feeling of seriousness and determination in crossing a soundscape of wonders, the rhythm is a military march, with the primal drumming emphasized by the bells, every eight steps of the way.

Up to now the song is a celebration of life, in all its horror and intensity of emotion, navigated by the Will to Power: a Faustian soul that sells itself in return of glory, power and riches. The pact was sealed In Nomine Satanas. In every riff C open chord, it beckons for the protagonist’s soul, preparing us in the same time for breakdown D by slowing down. And here the Dark Lord appears, in a way that reminds us of Manowar’s Bridge of Death:

I walk this endless night
His eyes the only light
Repeatedly he whispers my name
Fingers move and twist
Through crimson thick dark mist and voices cry of agony and pain
Close now to his kingdom
The bleak world dark and still
I follow the voice whispering my name
Approach the gate of sin
Opened up to let me in and there, He stand in flames
The price now I must pay for eternity my soul his claim
For years of pleasures, victory and gold
The one who stand in flames
Now rise and walk my way and reach out for my soul

Hence, we learn of the protagonist’s choice of this world over the afterlife. Of power in the here and the now versus an uncertain paradise. The choice of what is perceived as reality.

Loss of words, for the indescribable. The 9th interval added in the ringing power chords that rise and return to their tonic and the acoustic arpeggio paints sonic emptiness, a vision of eternity.

Then the basic riff returns, and the emotion of glory is further pushed to the extreme, by introducing rising ringing notes on a piano, which are carried on by the guitar solo. Internal dialogue this far has been minimal. And this is the point here, a relentless pursuit towards a climax, the path towards the heights, one simple great idea after the next, until:

I stand at the jaws of the pit
The heat scorches my flesh
The fall seem never to end
My hair burns
My eyes can’t see
The flames slowly eat my soul
The pain tears my mind
Hear my cries oh Lord
Have mercy oh Lord
This can’t be
Raging flames all over me
Inferno of heat
Oh no, oh no, oh noooooo, noooooo, noooooo…

And everything collapses in chromatic immolation as the hero perishes into the Eternal Fire, consumed by his lust of power. Verily, none has faced the Lord and lived. The riff is resolved in a simple manner, by mixing the main marching riff with a harsher succession of descending fifth chords, bringing together melody and blasphemy against conventional harmony for the perfect finale, as B1 transforms into B2.

The protagonist of the Bathory song, obsessed with his lust for power, sells his soul to an untamed force which he cannot understand and is led to ruin, in perhaps one of the most theatrical vocal performances in metal. Yet why did he fail?

Because of hubris, a pagan idea that was absorbed into the Devil. The dark truths within the very human soul which romanticism embraced are embodied in the Devil and regardless of whether he is a symbol or an actual being, he is associated with things that are real: disease, fear, anger, hate, earthly life, fire, power, desire and most importantly rebellion and hubris against the creator, making him a tragic figure of mythical proportions.

However, in this song, we get but a glimpse of Satan, as a lord of riches, glory and damnation for those who commit hubris. To better understand his relation to metal music, we will have to wait until some years later, when pioneering musicians would dare to walk into Bathory’s footsteps.

To Walk the Infernal Fields 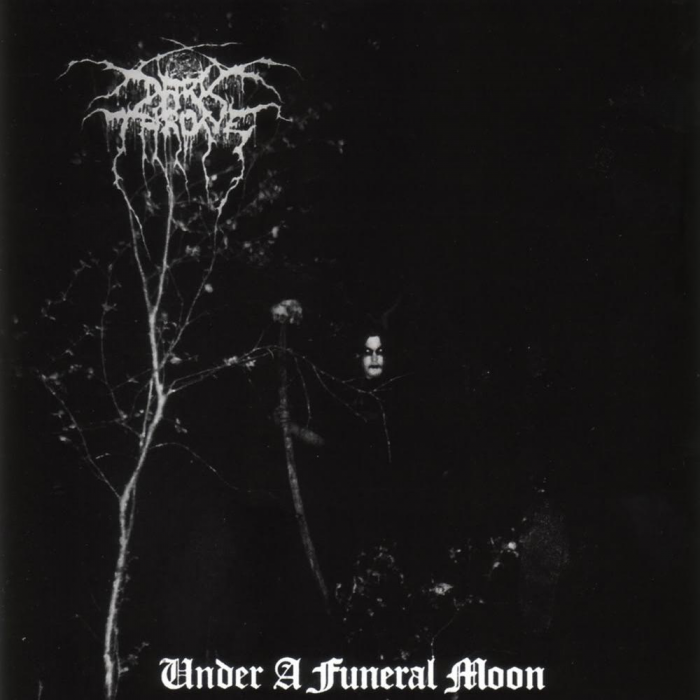 Six years have passed since then, nothing compared to the thousand years of lost pride and lust, as Darkthrone’s hero attempts to embrace Evil as part of himself. The marching Bathory riff B3 returns and the overture stays almost the same but twisted with added sharps. B3 is identical to A2, but I named them thus, in order to illustrate the analogy between the two tracks; the entire song is an answer to Bathory, and a continuation of the quest for immortality:

Here the narrator addresses the Devil as an entity within oneself. This is in stark contrast to the previous epic, wherein the Devil was an impersonal and distant being that delighted in condemnation. This is an occult view, where Satan is associated with the Subconscious part of the self, the one focused on reality. In this kind of asceticism, human passions and the power of Nature are used to conquer the world of the senses. Hence, the lyricist revels in worship of this force and in embracing it as himself, going perhaps beyond the Jungian journey of self-discovery.

Essentially to Walk the Infernal Fields is to Walk beyond Good and Evil. Evil appears as Nature’s way for the proliferation of strength and life, a bittersweet revelation, befit of a bittersweet riff, where Good and Evil are transcended in the totality of experience, represented as harmony and disharmony through the use of the tritone interval in riff Γ.

Hence, riff Γ can be divided into two parts: The first part emphasizes harmony and bears a chord reminiscent of the sus2 chord on the middle part of Enter the Eternal Fire. After the harsh previous part, this chord sounds liberating as it sends its infernal hails to Quorthon, six years in the past.

The second part represents the shadowy aspects of existence. Here, Darkthrone introduce a tritone in what was to become their signature style, to combat instant gratification of the listener, and denying him indulgence in harmonic consonance, twisting the melody through the F5 chord, by adding a B note in place of the C.

Then the song faces the chromatic breakdown of Ψ, reminiscent of the Eternal Fire meltdown part Ω. Yet this riff is more melodic, signifying control over the dark powers, leading into a slow part that finds resolution in the sublimation of the main riff into B4. A triumphant ending before the song repeats itself.

This part is significant, as it communicates the essence of Satan as strength and defiance against ideals such as equality and love who, through their overuse as “virtues,” have exhausted themselves of any meaning and are trapped in a world of pretense, personified by God, in order to control and excuse the petty little lies which men call their lives. With an antisocial and rebellious sound, Darkthrone assaults those values and in the manner of the Left Hand path, by reaffirming the world as Power.

The sight of your horns is my dearest vision,
They impale all holy and weak
To stamp down the wretched and the weak: the law of the strong and the joy of the world!
You watch me face the mirror,
And see desecration
With my art I am the fist,
In the face of God

Occult experiences rely on symbols to be communicated. Therefore, why not explain black metal spirituality through the Dionysiac – yet Apollonian in their subtle reasoning – words of the philosopher who defined metal attitude and made a weltanschauung out of it? The weltanschauung of self-overcoming, through Heracletean conflict and inner war!

And do you know what “the world” is to me? Shall I show it to you in my mirror? This world: a monster of energy, without beginning, without end; a firm, iron magnitude of force that does not grow bigger or smaller, that does not expend itself but only transforms itself; as a whole, of unalterable size, a household without expenses or losses, but likewise without increase or income; enclosed by “nothingness” as by a boundary; not something blurry or wasted, not something endlessly extended, but set in a definite space as a definite force, and not a space that might be “empty” here or there, but rather as force throughout, as a play of forces and waves of forces, at the same time one and many, increasing here and at the same time decreasing there; a sea of forces flowing and rushing together, eternally changing, eternally flooding back, with tremendous years of recurrence, with an ebb and a flood of its forms; out of the simplest forms striving toward the most complex, out of the stillest, most rigid, coldest forms striving toward the hottest, most turbulent, most self-contradictory, and then again returning home to the simple out of this abundance, out of the play of contradictions back to the joy of concord, still affirming itself in this uniformity of its courses and its years, blessing itself as that which must return eternally, as a becoming that knows no satiety, no disgust, no weariness: this, my Dionysian world of the eternally self- creating, the eternally self-destroying, this mystery world of the twofold voluptuous delight, my “beyond good and evil,” without goal, unless the joy of the circle is itself a goal; without will, unless a ring feels good will toward itself— do you want a name for this world? A solution for all of its riddles? A light for you, too, you best-concealed, strongest, most intrepid, most midnightly men?— This world is the will to power—and nothing besides! And you yourselves are also this will to power—and nothing besides!
― Friedrich Nietzsche, The Will to Power

Thus those two songs, connect with each other, are continuations of each other, bonded beyond time, seeking power from things that society wishes to abolish and hide. Black metal is a fist in the face of lies, and through its tragic spirit, ascertains the beauty of life.

Metal is undogmatic, yet spiritual: it preserves, in a way, the essence of religion, especially the pagan one from which it often derives its topics in the sense of religio as re-lingare, meaning “to reconnect.” Symbols of a perennial tradition, of the occult, the hidden and the powerful are rampant, the most prominent of which is the figure of the horned one who said:

Better to reign in hell than serve in heav’n — Satan, from John Milton’s Paradise Lost