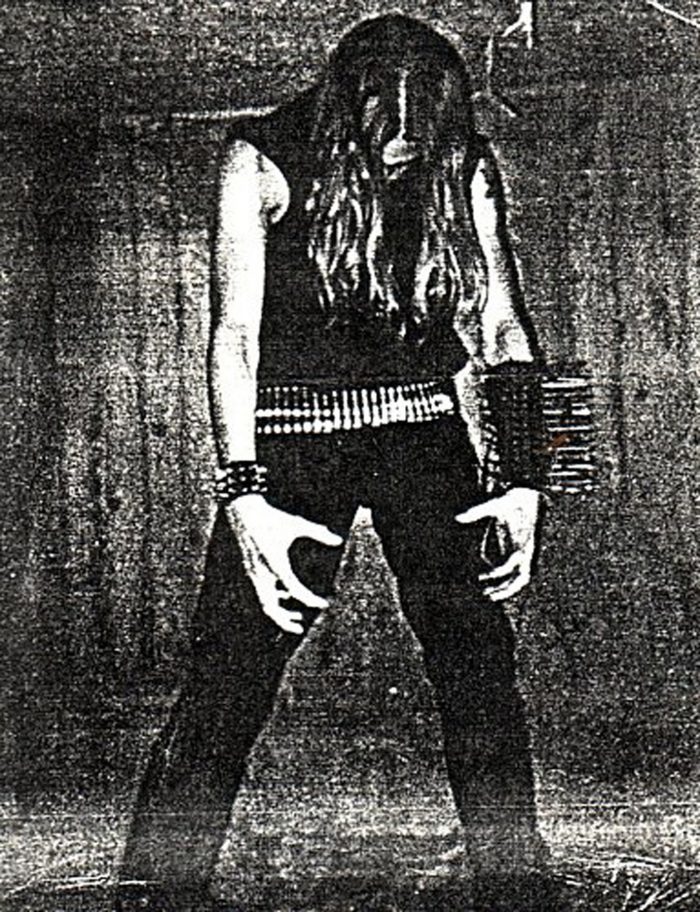 Counted among its practitioners is early Tiamat. Before they went into mainstream direction with their “gothic” stylings and dark rock, they wrote in aforementioned style some demos (as Treblinka) and first LP – Sumerian Cry. Featured on their The Sign Of The Pentagram demo is a curiosity called “Evilized”. Roughly, its structure is:

The song is opened by the riff which successfully creates tension and a sense of uncertainty. Then it goes into riff 1a (de facto main riff of the song), which is in turn followed by a variation of it (or rather a build-up made from the same notes) and then again played in its primary form. The song remains in a tense mode until it finally finds a release in the actual second riff, but quickly returns to it, albeit with a slight change of tone, with riff 3. What can be observed up until this point is that the riffs themselves are delightfully crude and evil sounding plus they are still unconstrained by later conventionalities of a genre. The problem is that they simply don’t add to each other in a way, onto which young bands who achieved classic status, even if unwittingly or by sheer luck, have stumbled. Parts are “distant” enough from each other, yet somehow much needed musical exchange between them simply don’t occur. As a result, while there isn’t much continuity between the riffs and transitions are sharp, it all feels a bit flat.

The song repeats most of this segment once more. However, after it reaches riff 3 for the second time, the storytelling abruptly ends. On a whim, the band decided to put there some playful, bluesy interlude, but the song doesn’t really go for storytelling in a different genre with it, rather it is simply put on hold and the listener is forced to wait for this purely self-referential part to play itself out. It is worth to mention, that on Sumerian Cry, which contained some remade material from the demos, it is even more elongate and adorned, reaching the level of self-parody.

After that the song recovers by returning to the intro, then again to its main riff (this time played with a noisy solo), and then finally tries to somehow conclude itself in an outro riff, which sounds random and pointless. If there is anything that the above mentioned interlude was good for, it is to provide this contrast with recurring opening riff, whose tension and uncertainty was even more suggestive this time. However, as even the band seems to confirm, that wasn’t intention here and potential benefits are too pyrrhic for the whole to still be salvageable, much less to succeed:

The song ‘Evilized’ has a long riff in the middle that goes pretty much in the direction of pure Rock’n’Roll. Even after all these years it still sounds very strange there.

“It is strange, it still is. You know, we made music with TREBLINKA because it was fun to do. We also didn’t want to limit ourselves in any way. Someone played that riff once when we were practicing and we thought it was cool to put that part in ‘Evilized’. It also proves that we had a certain sense of humor. Today, however, I think that that part ruins the song a little bit. I certainly wouldn’t do it anymore now.”

Jörgen ‘Juck’ Thullberg in an interview for Voices from the Darkside.

In the past, there was some similar tomfoolery by Anthrax, Nuclear Assault and even in the film Wild at Heart, where Powermad is playing an Elvis Presley song. Then there was this whole death and black’n’roll trend. But there were also serious and respectable examples, like positively memorable Amorphis’ Tales from the Thousand Lakes, where are numerous rockish elements, albeit metalized, much more seamlessly incorporated and enjoyable than in Evilized. And yet, ultimately, they also amount to not much more than aesthetic, which is able to brought to mind mainly the style itself, the atmosphere of the epoch associated with it and the most social aspects it generated in its heyday. Furthermore, there is a justified impression, that the musicians are aiming solely at those trivial associations, or at showmanship, as if, for example, “we can play some 70s rock” was a goal in itself. That in “Evilized” it is contrasted with something aimed at being so foreboding only accentuates the questions, which goes beyond qualities of just this particular song or the Tiamat’s musical capabilities.

Perhaps Tiamat actually never felt at home with death metal and they were simply reflecting what others were playing at the time. Still, it is quite revealing how that (admittedly tokenish) bluesy interlude clashes with narratively superior (yet still very basic) death metal riff, and how the latter is exposing the former as the mundane, the backdrop, the music for the sake of itself. It’s a music of a good time, or at least that’s how it is always described, so supposedly that’s what we should feel when listening to it, and it seems that there is a problem with such musical forms as if they were innately unfit to tell much story beyond that or to carry more profound meanings. Where rock promises mundane hedonism (and equally mundane sufferings), the opposite is where metal excels, or maybe it simply creates its own, more exciting, fulfilling variant – the one which may be familiar to anyone who knows what „a fine day to die“ means. Where rock indulges in personal and social matters, even if they are cleverly universalized in order to gain in importance, metal is inspired by external and essential, hinting at some order of a higher rank. As such it became „dehumanized“, which simultanously makes it less shareable and relatable in social contexts, thus less „fun“. But then again, what is fun? Real fun is Total Death, A Lesson In Violence, Bodily Dismemberment, Blaspherereion or Ghettoblaster, not to mention more sublime examples provided by the best of black metal, which brings not fun, but lasting joy.