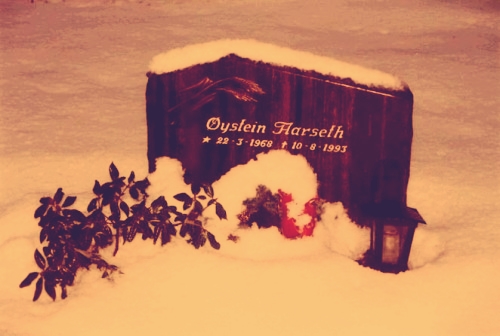 Many of the pariahs seen infesting contemporary American black metal – communism, narcissism, an illusion of extremism – can be traced back to one man: Euroynmous of Mayhem.

Euronymous is often misidentified as “the godfather of black metal” but truthfully that title belongs to another man: Quorthon. Quorthon pioneered a plethora of black metal techniques and aesthetics in Bathory long before Euronymous became erroneously credited for them. But now, thanks to the information age and it’s absolute freedom of information flow, most of who and what Euroynmous claimed to be can be successfully debunked. And with an expanded scope on some mirroring cultural factors, the truth becomes obvious:

Let us deconstruct some of the pieces of this red pill revelation:

I) The Hipster Privilege

Much like the d-bags living in the expensive hipster neighborhoods of San Francisco and Brooklyn, Euronymous’s wealthy parents were funding his lifestyle. It was his parents who were funding his record shop, which is how we can explain him owning a shop in his early 20’s as well as why it closed down immediately when news of Varg‘s church burning hit the papers. It was they who owned the country house where Dead famously committed suicide. And like the out of touch parents of most spoiled rich kids; Euronymous’s parents were completely oblivious to the “Prince of Satan” character he was masquerading as.

Similarly, many of today’s flavor-of-the-week hipster black metal bands of Brooklyn (such as Krallice and Liturgy) are equally comprised of at least one entitled, out of touch, narcissistic little boy living off of mommy and daddy’s money. Hunter Hunt Hendrix has likely not been funding his $2,000 a month Bushwick apartment or his $50,000 per semester Columbia degree from Liturgy’s album sales; nope, we can infer with all likeliness that it was mommy and daddy’s money that was funding this bohemian lifestyle.

It should now become clear how both H cubed and Euronymous were able to advance themselves as some kind of innovative counter culture superstar – be it through a Wikipeadia-quality manifesto or a made up gang of devil worshipers – it all came down to mommy and daddy’s pockets. Advertising costs money. Promotion costs money. Tours cost money. But when your parents are paying, it all comes so much easier.

As noted by several musicians from the Norwegian circle, Euronymous was constantly trying to police bands and musicians of the black metal scene. Euronymous was also openly communist. Does this sound familiar?

Watch any Norwegian black metal or Mayhem documentary from the last decade and you’ll see many of those who were close to the dork lord cast great hatred on him. Even the questionable Lords of Chaos book took notice of the absolute lack of empathy felt for him after his death; even by other members of Mayhem! Euronymous was such a piece of shit that he was missed by virtually nobody that knew him.

The reason for the Norweigion black metal movement’s utter rejection of its centerpiece was Euronymous’s attempts to impose a communist agenda on a group that, both as a whole and in it’s individual parts, was conservative. Hellhammer was a white nationalist. Varg flirted with Nazism. But Euronymous was red to the bone. He forced his rules on everyone. You had to wear corpse paint. You had to be satanist. You had to play your fictional character at all times. In Euronymous’s socialist dystopia, he was dictator. That didn’t work out so well for him.

History is repeating itself. The American black metal scene is under the communist suppression of Antifa, the majority of which are, frankly, hipsters. Spoiled, entitled hipsters that are feeling neglected by capitalism are therefore trying to impose a collectivist dystopia on a movement of conservatives. The result will inevitably be the same… just as hipster Euronymous was destroyed by conservative retribution in the form of a blade, the American Antifa movement is doomed to a swift execution at the hands of conservatism. Perhaps 23,000 stab wounds will do the trick?

The most obvious feature of a hipster is weakness. Most hipster men are pompous and arrogant but will cower in the face of confrontation. They want to pretend that they matter, that they’re intelligent, that they’re cultured, but realistically it’s all a front to mask the afraid, emasculated, insecure pile of failures that composes the core of their being.

Euronymous was the same. To quote Varg “Euronymous wanted to appear extreme. But he wasn’t extreme.” It was Dead who mutilated his body in the public forum. It was Varg who started the church burnings. It was Faust who first killed in cold blood.

But Euronymous, desperate to be the alpha male but empty of the courage and confidence to do so, was forced into building his entire being on the creation of falsehoods. He claimed he was the leader of a mafia. He claimed he consumed the brains of a corpse. He claimed he had murdered a foreign journalist.

Fortunately, in this case, history has remembered the truth. Varg Vikernes was the alpha male of the Norwegion black metal movement. He exposed Euronymous as a beta pussy and a fraud. The scene caught on. Varg was a man of action. Varg made good on his word.

In a decisive confrontation, it was decided once and for all who would be the true alpha male. Varg, benefiting from the biological advantages of natural selection, survived the altercation. Euronymous did not.

It’s time to put the Euronymous legend to rest. He wasn’t an innovative guitarist. He wasn’t a black metal icon. He was a douchey rich communist hipster just like those scumbags we collectively loath as a society. He wasn’t dark, he wasn’t evil, he was a pussy who took credit for the actions of those around him. He had a fucking waxed hipster mustache and wore fucking belly shirts for Christ’s sake. This is the reality. This is the truth in all it’s coldness. There is no hiding from it!

The metal world we knew is dead. It’s no longer possible to conjure the black metal spirit of the 90’s. To romanticize the days of apolitical concerts, mystical auras, and celebrity musicians is to waste your existence. We are in a different world now. A world that is woke. A world that is ruthless.

Your metal idols were flawed. They were a lie. Most were of no use to their societies. It’s time for our metal heroes to die, for their corpses to be burned and their ashes scattered. The sadistic light of judgment has reigned down, and it’s called the truth. This is our new existence. There is no turning back!

As Pazuzu would say, “Euronymous sucks cocks in hell.” He deserved to die like a communist dog.