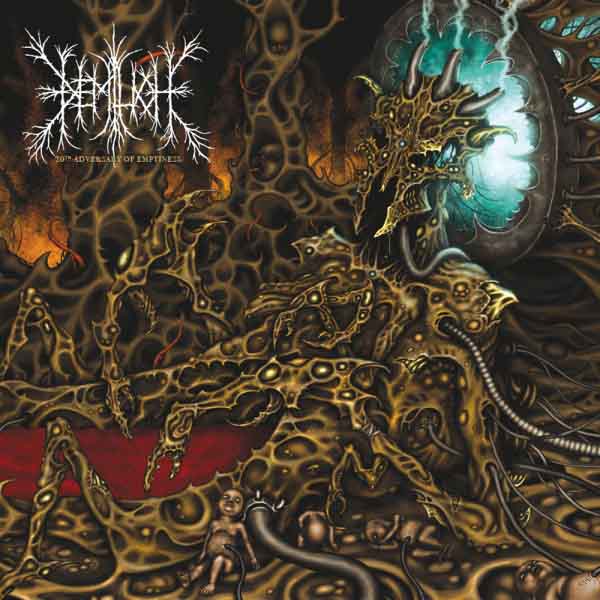 Article by David Rosales; get more perspective by also reading his article on Timeghoul

Much has been said about Demilich here and elsewhere, but remarkably little has been written about the potential of their music as ground for future bands to elaborate. For starters, the fact that Demilich has a solid fanbase and many admirers among professional musicians, but very few bands produce music in the same vein tells us that it is no easy task. This may also be due to the fact that most people tend to confuse appearances with mechanics, and mechanics in turn with character and essence. It seems to me that there is very little to elaborate, since Demilich is only distinctive at its very surface, in a very similar case to Immolation’s. Anything anybody may take from them besides this sort of surface plagiarism are the abstract concepts of loosening and playing with rhythm and mode consistently to achieve a distinctive sound. Perhaps even taking cues from their distinctive style could yield the foundation for the trademark sound of a younger band.

First, what makes Demilich stand out is their idiomatic approach to death metal that takes the best out of playing with tritones and off-putting harmonies in the context of the gore-flavored aura strand of the genre. Where Immolation goes for uncomfortable and dissonant, Demilich takes the modal/harmonic and rhythmic aspects of death metal to the extreme of this aural potential without incurring in the surface character deconstruction of Immolation’s coloring. Both of these bands, however, make use of standard death metal song-wide structuring techniques of the riff-salad kind with motific liaisons.

This surface extravagance coupled with an inner orthodoxy makes it very tricky for anyone to successfully extract the core of their teachings. In the case of Demilich even more so, since it is the silly side of their music’s character that stands out the most, making it particularly difficult to emulate them without producing obvious imitations. This may lead younger bands to think that a particularly derivative passage’s conspicuous appearance might be mitigated by mixing it into a hodgepodge of different styles and sounds. But to the perceptive listeners out there this will only sound like a motley fabric, a bag o’ tricks on display intended to fill in for actual content (Editor’s note: Have we told you about carnival music?).

Finally, superficial appreciation of the music of Demilich often leads fans to single out their music as “progressive”, as “opposed to traditional death metal”. Frequent readers of this site should immediately identify the grave mistake in this. Be that as it may, when you take the misunderstanding how progressive death metal in general is, and you put it together with the common metalhead’s idea of what progressive rock or metal is, you may begin to envision the monumental blunders that might come as a result.

Rather than insert Demilich-sounding passages into modern Dream Theater soundtracks, the young death metal musician might take head from the way Demilich balances out their outlandish sound. Demilich’s music, when seen at an abstract and aural level, can be divided into passages that are either more pounding, more syncopated or what we now call doom-laden (Demilich never stops too much in these power chord phrasal statements, though, so they do not really stand out). The emphasis on groove and the goofy-gore character is a constant that gives them their trademark sound.

The value of these concepts lies in learning how to produce sections that create variety within a narrative, with a distinctive and constant language that lends a personality of its own to the music. The narrative is produced through the equivalent of formal statements, developments, pauses for air, retaking of the topic, etc, in their musical manifestations. This is the greatest value of the best classic death metal bands: their outstanding ability to articulate.

28 thoughts on “On The Music of Demilich”