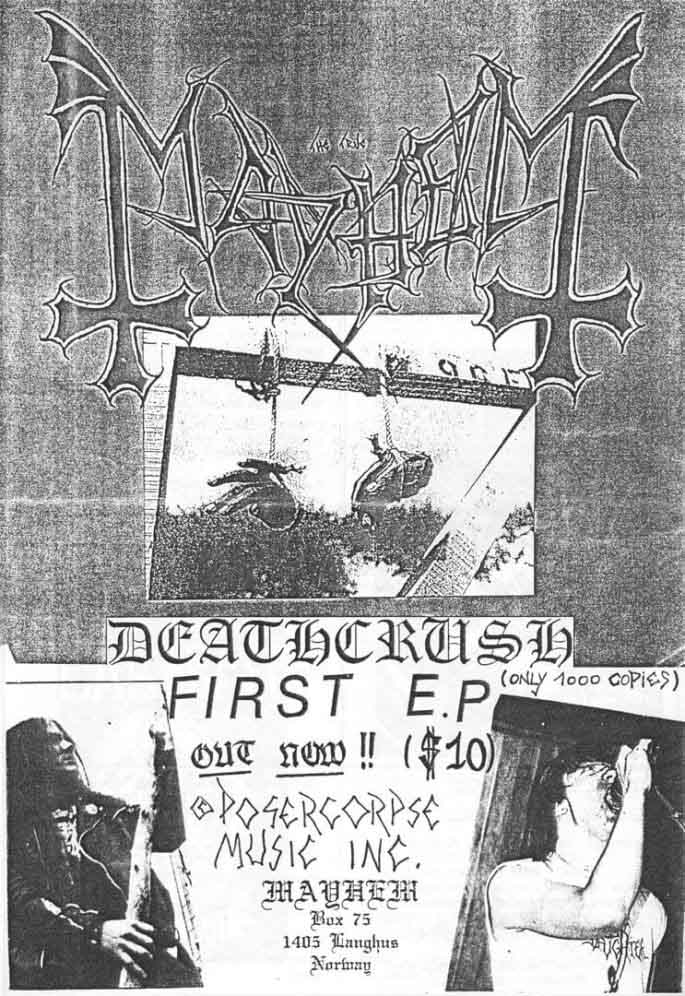 Hegel has freed history from metaphysics — he made it dialectic; but his conception of history was essentially idealistic. But now idealism was driven from its last refuge, the philosophy of history; now a materialistic treatment of history was propounded, and a method found of explaining man’s “knowing” by his “being”, instead of, as heretofore, his “being” by his “knowing”.
—Fredrik Engels, Socialism Utopian and Scientific

An unconscious despair drove the leadership of Mayhem to seek in Stalinism and other forms of fascistic communism the embodiment of social, material and spiritual death to all the pointlessness and obsolete ways of thinking and acting of modern Western society. This position may have lead to the early, all-out embracing of contrarian-phrase hardcore music, now drilling, now grooving, kept together by pure visceral impulse rather than by logical intertwining. A despair that is unaware of itself begets more despair, the search and focus of Mayhem towards totalitarian communism and supernatural demonic forces inevitably led to realizations internal and external. For, it was evident that the greatest potential for the acquisition of influence and thence freedom to act anarchically lay in the commercial side of industrial capitalism. Touring did not come free, neither did the production of music of themselves and others. To achieve goals, they realized, meant to embrace all means and methods. Communism was never the point, but evil. Only those for whom spiritual reality is superior to material, contingent elements, can this be even plausible. The rest will scratch their heads and once more denounce the sincerity of an impulse to transcendental evil.

We have seen, besides, that the material conditions of production and circulation inevitably develop with large-scale industry and large-scale agriculture, and increasingly tend to enlarge the scope of thisauthority. Hence it is absurd to speak of the principle of authority as being absolutely evil, and of the principle of autonomy as being absolutely good. Authority and autonomy are relative things whose spheres vary with the various phases of the development of society. If the autonomists confined themselves to saying that the social organisation of the future would restrict authority solely to the limits within which the conditions of production render it inevitable, we could understand each other; but they are blind to all facts that make the thing necessary and they passionately fight the world.
—Karl Marx, The First International

Not wanting, in despair, to be oneself, as Kierkegaard rambled about in circles, shows up as the middle stage of Mayhem, perhaps what drove Dead to suicide. How and what this reflects upon the music is a flavor of vocal performance that becomes an example of expression requisite for music that must reflect this desperation to leave the modern self behind, a nihilistic going-beyond the present state, through flames and destruction. This, in a nutshell was why totalitarian communistic states were the ideal scenario of cleansing envisioned here. There, the hypocrisy of early Utopian communism and of industrial capitalism, with its consumerism and its happy-trigger burning down of the world for the sake of vanity, were left behind.  In the midst of the utmost terror and unapologetic repression of a state like North Korea, the options lie in either destruction or a form of secret soul-searching: the supreme condition for a twisted, futuristic yoga never before seen on the face of the Earth.

The leper was caught up in a practice of rejection, of exile-enclosure; he was left to his doom in a mass among which it was useless to differentiate; those sick of the plague were caught up in a meticulous tactical partitioning in which individual differentiations were the constricting effects of a power that multiplied, articulated and subdivided itself; the great confinement on the one hand; the correct training on the other. The leper and his separation; the plague and its segmentations. The first is marked; the second analysed and distributed.
—Michel Foucalt, Discipline and Punishment

In keeping with the next step in Kierkegaard’s thought, we continue exploration of the concept wanting in despair to be oneself, however, free from the elaborations of the religious man.  In desperately seeking for a voice, the material, the political and hence all that is contingent, takes the back seat. Visions of pure evil arise, first in the wanton destruction that we can hear and read in this most delicious Deathcrush, then in transcendental evil overcoming desperation in De Mysterris Dom Sathanas.  It is the ‘sin of despair’ explicitly and unapologetically flaunted in the earlier work that makes ascendance to the place of the second one possible.  This is not only so ideologically and psychologically but also musically.  Whereas the hardcore tendencies and caveman gestures of Deathcrush tend to be disparaged among those who prefer subsequent evolution of black metal as a whole (or contemporaries and predecessors in Bathory, for instance), the seeds of unbound, direct creativity here can only be appreciated in the same light that the genius of Hellhammer makes sense.  From Hellhammer to early Mayhem, the chaos is preserved, re-inspected and taken elsewhere, taking the torch from the sterility that became of that train of thought in Celtic Frost.

Man has emancipated himself; he has separated himself from animality and constituted himself a man; he has begun his distinctively human history and development by a nact of disobedience and science ‐ that is, by rebellion and by thought.
—Mikhail Bakunin, God and the State

One may see in Mayhem’s early proposal an attempt to bring the synthesis of mortality and immortality of human nature through a harsh confrontation of both, giving rise to outwardly confused ramblings and attitudes that are incoherent to normalcy.  In essence, they coalesce into a total, fanatic need to see the world of lies burn.  Instead of a slow, cautious return to tradition, the likes of Mayhem want ‘mayhem’ precisely, the quickest and most efficient route towards a restart: a new ground zero at a further point in mental evolution.

When you point a finger at the moon to indicate the moon, instead of looking at the moon,the stupid ones look at your finger.
— Mao Ze-Dong

14 thoughts on “Sin and Despair in Deathcrush”