Originally this was to be published on Examiner.com, but they censored it for reasons unknown, with no explanation given.

One minute it was there, and the next minute it was all deleted as if it had never existed. Never mind the work that went into putting the interview together, formatting it in Examiner’s arcane system, working around their software, etc. Just deleted. I use Examiner.com because, since most of what they publish is pop culture, it’s a good place for links to underground death metal and black metal bands to exist, but it makes me wonder how professional they are to simply delete work without an explanation or even notification.

I was able to restore most of it and at the band’s request, we’re republishing the uncensored version here. 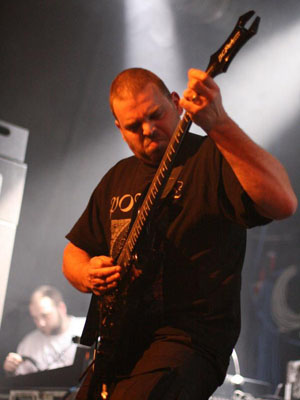 In a time of just about any style being called “black metal” if someone shrieks during the recording, Sammath stay true to the older ideal of powerful, melancholic, evil and naturalistic music.

Their archly elegant Strijd kicked off a promising career, and since then, the band have experimented with a more warlike outlook. We were fortunate to catch a few words with founder Jan Kreutwagen about the band’s fifth album, yet unnamed, which will emerge this year.

What can you tell us about the new Sammath? When will it be recorded, on what label, what’s it like?

It’s turning out just like I wanted Sammath to sound back in 1994: a fine-tuned combination of total chaos, aggression and the right dose of melody. Every time we started to write tracks for this album something good popped up.

The new album is only 34 minutes. I can’t see myself creating a better album than this in the near future. The work Ruud (bass) put into Sammath over the last few years is probably why it all sounds this way. He has a good ear to weed out the weak parts and most of all filter out the bullshit. His dedication and experience, and also that of complete nutcase drummer Koos Bos, have made Sammath sound like this. I write all the music, but what Koos and Ruud deliver is so damn aggressive and intelligently thought out that it takes it all to a new level.

Folter will be releasing the CD at the end of this year or maybe early next year. I get enough offers from other, smaller and larger labels, but I will never leave Folter Records. What others think or how big the band is doesn’t really concern me. Jorg is a underground maniac and he was the first to give me a recording contract in 1997.

The demos you’ve been posting are admirably raw. Will the production and adornments remain this minimalist, or will there be more guitar solos, production tweaks and other refinements as there were on the last Sammath?

The tracks on the internet are just pre-production demos; all drums and guitars will be re-recorded in the coming months. I decided to throw some tracks online and the response has been overwhelming. I really want this release to sound as basic and raw as possible but with a great production that does not sound thin and weak like most black metal releases. Before we enter the studio I want the entire album finished in demo version.

Peter Neuber (Axis of advance, Severe Torture) will once again be doing the mastering. He knows exactly how to get Sammath to sound its best — a review for the last album stated that it sounds like it’s all going to cave in at any moment, raw, loud and filthy. This time there are no guitar solos, production tweaks or other bullshit; the tracks have enough energy already. It’s all very primal and blunt. I don’t think todays black metal fan will like it. The last album is still fucking killer, but this will make it sound like an ABBA release.

These songs strike me as the best expression of the direction you’ve gone since the first album. How has your direction and intent changed?

Finally I am achieving what I’ve always wanted but simply could not do. It’s not technical, it’s just all very blunt and straight forward aggression. But the combination with the new chainsaw bass sound, the over-the-top crazy drums, without triggers or any bullshit, makes it all sound very alive and dynamic. Someone told me it sounds like a combination of all previous Sammath CDs. I also think experience and creating your own sound is something that takes years to achieve.

Problem is that, unlike in 1994 when we started, we all have families, kids, so most of our days are filled up with watching over the kids or getting enough money together for them. I usually only have enough time at night so I get up in the middle of the night to work on new material. I now have the opportunity to record whenever I want, seeing as I have my own primitive little hellhole to create music at dangerously high levels without anyone being able to hear it.

Sample tracks posted so far sound like a cross between APOCALYPSE COMMAND and first album SETHERIAL; they’re blasting black metal with death metal influences, on the edge of war metal, but they have actual melody and structure so it’s not as monotonic. What are your influences and what style do you want to express with the new songs?

You have described it brilliantly. Those bands are fucking great! I had never heard of Apocalypse Command (shame on me, just ordered all I could find). I didn’t really have any plans before I started recording; I just began and it ended up like this. After a few months I got the feeling that this was going to be very stripped down album, blunt black metal — no remorse. A big influence on me the last few years are Blasphemy, Revenge, Brutality, Incubus (now Opprobrium), and Autopsy. And some new bands like Portal, Impetuous Ritual.

Do you think black metal is still alive, or has it been absorbed into something else? How do you describe your music, now that we’re entering into black metal’s second decade?

I really don’t have a clue, at concerts I see less and less people I know, but then again I don’t go as frequently as I used to. I only have time in the winter, making sure to go to the Nuclear War Now! Productions fest this year again, the scene is great when you see over a thousand maniacs from all over the world there. Last year there were a group of about thirty of us creating havoc outside and I think there were twenty different nationalities.

Black metal has always been a strange scene; people tend to get too serious, no fun, no humans, to me that’s absolute weakness. I think black metal died when all the suicide-kill-people self-mutilating fags appeared. All this anti-life gayness stands for the depressed little boys who simply can’t get laid and feel like the world hates them. There used to be a great gap between gothic and black metal, the way some bands try to combine these two are what’s raping the scene the most.

For me, and I can also say this for everyone in Sammath, black metal stands for arrogance and power. My grandfather taught me this, fuck everyone’s opinion, never listen to other people, always follow your instinct. Screw religion, never trust anyone, and above all, don’t give a shit. Even if people think I’m wrong I’m right. This might sound irritating, but I don’t look down on people, I’m a pretty easy going person, I just don’t bow down to anyone (except my wife…). The new Sammath sound is black/death/war metal, nothing new, but it will fuck you up.

Thank you for your time, and good luck with the new Sammath! Based on the promo track you sent us (attached in video form), this is going to be a great addition to the Sammath catalogue.