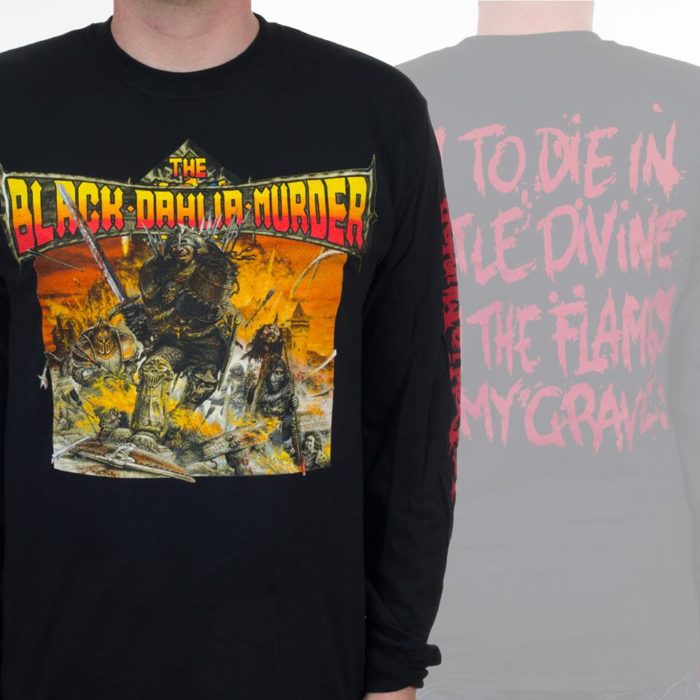 Brett Stevens and the Black Dahlia Murder were drinking in Brett’s white van. Brett’s book signing for Nihilism: A Philosophy Based In Nothingness And Eternity had gone well. However the hour grew late…

All Brett Stevens could think of was sodomizing these deathcore weaklings who were sitting on their asses against the walls of his beat up white van. Trevor had a can of Hamm’s wedged into his eye socket. Pus was oozing from the edges. Brett lit his pipe and pulled out his trusted copy of the Warhammer 40,000 Battle Manual from under the passenger seat. Hopefully the arcane statistics, numbers, and lore of the chaos gods would lull The Black Dahlia Murder into a state of deep, drunken sleep. That would relax their sphincters. Only then could Brett give them the hard and deep sodomy they deserved for being chubby, little weaklings.

Brett opened up the Warhammer 40,000 Battle Manual. The yellowed pen and ink drawings reminded him of his days playing the game in the early nineties to the grinding glory of Bolt Thrower. Brett then spoke up “GUYS WELL I THINK WE SHOULD ALL READ A STORY AND HIT THE SACK.”

“Which one? Metallica and the guacamole?”

“THE FALL OF THE ELDAR EMPIRE.”

‘HOW PECULIAR’ said Brett Stevens. Brett ignored the paternal phrase and turned to the lore. He starting reading out loud. He was muttering in a monotone about how the Eldar civilization grew content with their slothful lifestyles and fell prey to vile excess.

‘SOUNDS LIKE AMERIKA. IF ONLY WE COULD ESCAPE THE URBAN HORRORS TO RETURN TO THE MYTHICAL IDEAL OF MAYBERRY.‘

Brett’s mind grew drowsy and was transported back in time from Warhammer 40,000 lore to that of The Andy Griffith Show. He started speaking the brochure he had stuffed between the Jolt Cola stained pages out loud:

MAYBERRY WILL NOT SATISFY EVERYONE. NOTHING DOES. THERE IS NO SODOMY THERE. THAT THING REQUIRES THE GREATEST WILLPOWER AND INTELLIGENCE TO ACHIEVE. THE SMOOTH PENETRATION WE APPRECIATE IS THE RAREST, NOT THE COMMENEST.

THIS IS A VISION OF HELL FOR THE LIBERALS. THEY HATE MAJORITIES, THE WELL-ADJUSTED, THE SLICK GLIDE, THEY WANT TO REPLACE INTESTINAL ORAL CHALLENGES WITH PLEASURABLE EXTERNAL FROTTING REWARD CENTERS, AND TO BE FRANK, THEY HATE WHITE AND BLOND HAIRED PEOPLE. TO THEM, THE OLD LADIES WOULD SEEM BORING AND DIFFICULT. TO ME, THEY’RE ANOTHER CHALLENGE.

TO THOSE WHO SEE THE ELDERLY AS A CHANCE TO BE MORE THAN A SOON TO BE DEAD ROTTING BODY AND MORE THAN MERE TOOTHLESS SUCKERS GULPING DOWN MY JUNK IN AN ATTEMPT TO FIND PURPOSE IN THIS WORLD, MAYBERRY IS A DELIGHT. A RARE OASIS OF SANITY.

EVEN MORE, IT REPRESENTS THE AMERICAN AND EUROPEAN DREAM: WE WILL GO TO NEW PLACES, NEW HOLES, AND FORGE FOR OURSELVES A GOOD FUCKING, AND THEN WE CAN ENJOY THAT WHEN OUR KIDS ARE NOT VISITING AND LECTURING US WITH THE LESSONS THEY HAVE LEARNED IN INFECTION PREVENTION THAT WE HAVE ALWAYS IGNORED. WE DO THIS SO FUTURE GENERATIONS MAY GET IT UP USING THE DRUGS WE HAVE FOUGHT SO LONG AND HARD FOR, SO THAT THEIR MEMBERS MAY EXCEED US.

Brett Stevens was the only one in the van lulled to sleep by the sensual horrors of his retirement community. He was slouched forward in his orange-dusted driver’s seat, his lit pipe in his mouth, and Warhammer 40,000 Battle Manual on his lap.

The Black Dahlia Murder noticed the muttering stop. Brett’s boggled reading of his retirement home brochure had given The Black Dahlia Murder new hedonistic ideas. They would no longer just pervert metal licks into bitch-made screamo songs. They would no longer just use Trevor’s eye-socket as a cup holder. Brett had inspired them!

“We will go to new places, new holes, and forge for ourselves a good fucking!”

“Right on Trevor!” said the fat guy with the beard and ear-gauges. He pulled down his pants revealing a three by five inch… appendage. His member appeared to be made into a chode hidden by several layers of blubber at the base similar to how fat women appear to have larger breasts as their disgusting milk sacks are atop massive mounts of adipose tissues similar to building an igloo on Mount Everest. The fat poseur grabbed Trevor by the hair and ripped out the can of Hamm’s from Trevor’s mutant eye socket. The hole was dark and pussing with white-greenish eye goop.

The other metalcore degenerates turned on the car light. The fatso’s genitals, bladder, and guts were ripped straight out his body with his kidney on Trevor’s face. He was dead. Trevor was still conscious and flung the kidney at the wall. “Where’s my eye you bitches?”

The poseurs looked at his face. A massive void was apparent where his eyes had been. Stars were visible. It looked like the night sky in the countryside on a warm summer evening but was tinged purple. Something strange was afoot.

‘AAAAAAAAAAAAARRRRRRRRRRRGGGGGGGGGGGGGHHHHHHHHHHHH!” Trevor’s eye socket ripped through his skull, which cracked. The brain exploded like a water balloon, covering the white van in slimy pink brains. Trevor’s jaw flew forward and hit back in the back of hte head. His dirty blond mullet protected him from harm but he was awakened from the sweet dreams of watching the Andy Griffith show on TV Land the other day. Brett rubbed the back of his head.

Meanwhile, the Black Dahlia Murder were sucked through the veil of material reality towards the Warp. Brett turned around suddenly. His pipe was flung from his mouth landing on the passenger seat. All Brett could see was blood and brains all his van. He would have to take it to that Mexican cleaning place again. This was a disaster. ‘WHY THE HELL DID I DRINK WITH THESE KNUCKLEHEADS?”

The pipe’s embers reached the orange dust. This was not roach bait but the remnants of the fifty count box of Cheeto bags Brett had purchased at Costco a fortnight ago. He had crushed them all while driving out to rid his overflowing P.O. Box of hate mail, his Amazon subscription for industrial lubricants, and war metal promotional material.

‘CHEESE AIN’T FLAMMABLE. ALL IT WILL DO IS MELT” thought Brett. He moved to put out the fire with his tweed jacket.

Brett thought wrong. He forgot those were no ordinary Cheetos. They were Flamin’ Hot Cheetos. The fire was smoldering with heartburn like Brett’s asshole after eating them. The powder burned all the way down and out. It left a fiery, reddish orange residue all over the toilet. Brett’s nose was still irritated, hence the constant pipe smoking. It hadn’t felt this bad since he snorted roach bait off the floor in the seventh grade thinking it was coke.

The gas station vacuum was unable to get the tiny reddish specks of it out of the carpet and the upholstery. Brett’s dad would never spring for leather seats. Throwing the jacking on them fed the fire with a sudden burst of oxygen. The nutrient-free carbohydrates combusted.

A giant red flame rose up and singed Brett’s sunglasses off his face.

How should Brett Stevens escape the Flamin’ Hot Cheeto fire?

2 thoughts on “Choose Your Own Black Dahlia Murder Adventure, Chapter 3”