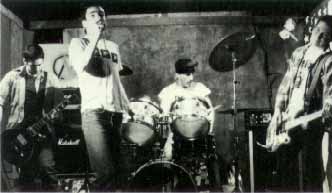 Thrash combined the short, fast songs of hardcore punk bands with the more structured, architected and melodic aspects of metal riffing. Deriving its name from the skaters who listened to it, called “thrashers,” thrash was a true crossover genre in that it was not purely metal and not purely punk, which both caused it trouble finding an initial audience and made it almost universally accessible. Its songs, often under thirty seconds, blasted away at society not so much from ideological principles but to mock and criticize the end result of ideology, which was a numb utilitarian society oblivious to the passage of time or the possibility of meaning to human existence.