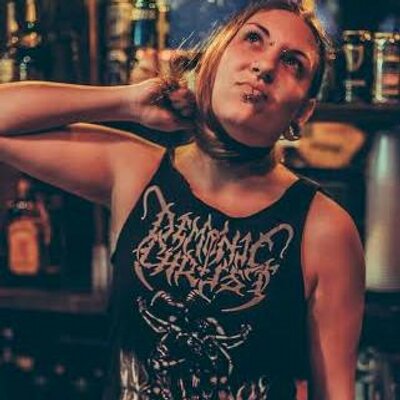 Here is a compilation of some juicy stuff that shows KK for what she really is: The typical leftist with double standards, who publicly judges and condemns others negatively for the very things they also do!!

We have put what we believe the best info first, that way you don’t have to waid through everything. But when you see all of it, even the most minute, all as a whole, it paints a clear picture of who KK really is – and what little of her all her white knights actually know about her!!!

Also please don’t forget about the stuff we already sent, where she is banging her head in front of the confederate flag guitar (and you’ll find below she is a fan of “outlaw country” and “southern rock”. And there was her wearing the DEMONIC CHRIST shirt….ha! Also, don’t forget the numerous reports of her with that Swastika shirt (though the photo still remains unfound)

KK holding up a Burzum CD!

“So that CD I’m holding? That would be an insanely-rare copy of Burzum’s Daudi Bauldrs album; it’s rare/collectible because of a small printing error on the cover. I know the picture has it backwards, but see how the end of ‘Burzum’ is cut off, and it just says “Burzu”? There are only a few copies like that in existence…and I haave oneeee, necause my boss is awesomeeee. Exciting.”

From her first paragraph: ” The spectres of a proud and bloody past make their voices heard on “The Ghost of Heritage,” a blackened paean to the band members’ collective ancestry. Wreathed in atmosphere and richened by primordial chants, the album somberly forges ahead at a glacial pace, then suddenly, without warning, plunges headfirst into a raging storm of pagan fury as bloodthirsty as the warriors whose virtues it extols. Hail Heritage. Hail Winterfylleth. ”

Apparently she doesn’t have a problem with people being proud and sticking to their heritage? How do people have unique heritages without borders?

Here she praises ORDER FROM CHAOS (who also went on to become Angelcorpse. Pete Helmkamp – originating member of both bands – also wrote “the Conqueror Manifesto” and is known for his RIGHT views.

For reference if you are unfamiliar with Pete, here is an interview with him you will likely enjoy. He knew what was about to happen to this country, quite prophetic actually!!

A quote from this interview with Pete:

“Do you think they pose any actual real threat to economic and social stability in the US?

“From what I do know, they haven’t got a chance in hell. I don’t think any real social change will take place in the US without a major upheaval – civil war, foreign war, major economic collapse. And I really see Fundamental Christianity as the answer offered to ‘restore freedom and democracy’. Centrists will swing Right, Leftists will be jailed, and we’ll have the good ole US of A back… Give them 25 years. 25 more years of decay, urban violence, racial tensions, and declining quality of living. Just like Hitler and the Nazis, they will seem like a good choice, or at least the lesser of evils.”

-This is the views of the bands KK used to openly ENDORSE!!!

– anyone who is somewhat knowledgable music knows what “neofolk” is all about. Why does she also praise European folk?
– same with “outlaw country” and “southern rock” – just do a simple image search for “outlaw country” and “southern rock” and enjoy all the confederate flags that are a part of the genres aesthetic of the genres!

Remember that time Phil from Cobalt had a raw black metal project with Mike from Loss and IT FUCKING RULED? Me too.”

Here she praises COBALT, whose Phil McSorely came under much fire for starting his black metal project Recleuse, which he launched by calling out all the “faggots” in the black metal scene.

“http://www.youtube.com/watch?v=hBdwTH9YYXA
Just because Cobalt rule live and touring with them was awesome.”

–   Here we fine out that she TOURED with Cobalt apparently, hahahaha. Wonder what sorts of things she heard Phil say backstage and was ok with?

“http://nuclearwarnowproductions.bandcamp.com/album/sacriphyx
Sacryphyx is dead good lo-fi death/thrash with more melody than you’d expect. Kinda Arghoslenty, but with the added bonus of being racism-free (I think).”

Apparently, she is familiar with Arghoslent enough to use them as a frame of reference, and didn’t mind praising hte band for sounding like them, even though they might not be racist”

How often has she listened to Arghoslent? She owns Burzum – it’s no stretch to think she proudly owns some Arghoslent as well!

Here she praises BOLZER, who has Swastika tattoos. KK conveniently shrugged this off with this interview of Bolzer here:
https://www.stereogum.com/1695074/qa-bolzer-on-psychedelic-drugs-st-anger-and-whats-up-with-those-swastika-tattoos/franchises/interview/

More praise of bands such as PESTE NOIRE, Diocletian, Cobalt, Destroyer 666 and Marduk

That’s all for now. But as you can see, this is quite the motherload. Hell, Just ONE of these things in particular is enough to cause all her clueless minions to light up the torches and go out and lynch anyone that disagrees with them!!!

19 thoughts on “A typical leftist with double standards”