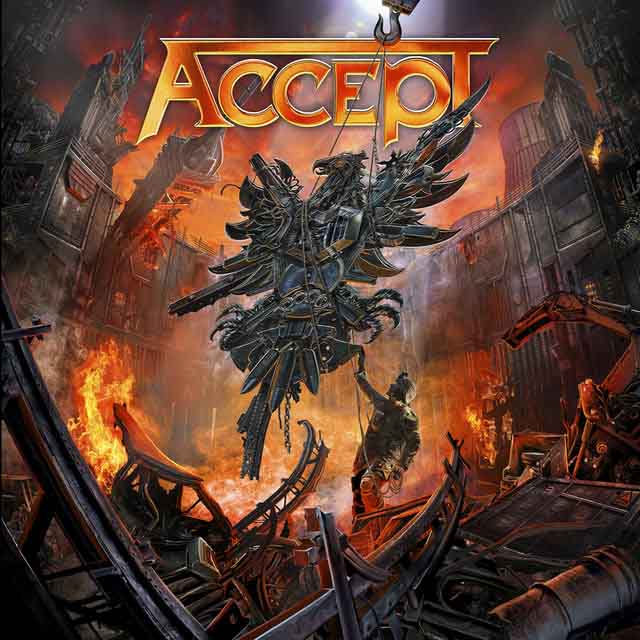 The title track was previewed as a music video. “The Rise of Chaos” is inoffensive, pedestrian heavy metal like a genericized Judas Priest:

Heavy metal pioneers ACCEPT are back in the game with a new studio album! The record entitled The Rise Of Chaos, will be unleashed on August 4th, 2017. The band’s 4th studio release through Nuclear Blast will continue the tradition of its three predecessors – Blood Of The Nations, Stalingrad, and Blind Rage – with grandeur and precision.

Today, the band releases their first album trailer, which was filmed at the recent ACCEPT media day in Hamburg on June 13th. A press conference took place on the day featuring Wolf Hoffmann and Holger Hübner, the WACKEN Festival organiser, both looking ahead to ACCEPT’s exclusive upcoming Wacken performance. [More info on ACCEPT’s Special Wacken Show – below.] To wrap up the day, Wolf signed the infamous “Golden Book” which belongs to the Hard Rock café in Hamburg. Watch the clip, here: https://youtu.be/9oi4_VIeDY0

“THE RISE OF CHAOS is something I have been thinking about often. Wherever we go – there is some hidden as well as some visible destruction and it kind of changes the world we know. What was there today – can be gone tomorrow and it’s somehow irritating, because it happens on so many levels and no one knows what comes next. The cover portrays our last stage set-up – but now clearly “destroyed” – like… after a catastrophe”, explains Wolf Hoffmann.

The cover artwork of the new record was created by the Hungarian artist Gyula Havancsák.

And if this wasn’t enough, ACCEPT will celebrate the album’s live premiere exclusively on August 3rd, on the day before its release, as a part of a special show at Wacken Open Air, Germany. The set will consist of three parts, which represent the band’s creative power:

Part 1 will bring fans a classic ACCEPT set, packed with new and old hits.
Part 2 will present another premiere: Wolf Hoffmann will be playing tracks from his solo album Headbangers Symphony, released in 2016, with the Czech National Symphony Orchestra for the very first time. On this record, Wolf has covered famous opuses by composers such as Beethoven, Vivaldi, and Mozart, in a metal guise. And in Part 3, all elements can be seen and heard together: ACCEPT will make the holy Wacken ground shake by sharing the stage with the orchestra, supported by a complex multimedia show.

This unique concert experience will take place on this year’s Night To Remember which makes it even more special. The Night To Remember is a celebrated, long-lasting Wacken tradition; for one night of the festival a selection of established bands will do something unique and special with their performance.

Wolf Hoffmann stated: “It’s always impressive to see how bands take this evening seriously and how much love the artists and the organist team put into their work to get a varied result. It’s a great tradition which underlines and documents the top-notch level of the international rock community like nothing else. We also want to present something that ACCEPT has never done before, we hope we can give something really special to the fans.”

“ACCEPT have been and are still a very important part of Germany’s heavy metal scene. We’re really looking forward to having them with us once more. With this epic concept, the Thursday evening will be one to remember for sure,” stated Thomas Jensen, organizer of Wacken Open Air.

Pre-order your physical copy of The Rise Of Chaos, here:
http://nblast.de/AcceptRiseOfChaosNB