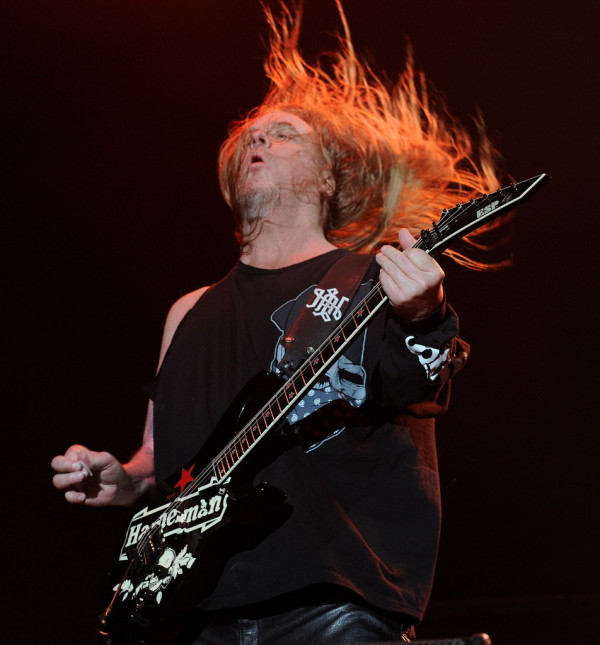 During his brief tour of planet Earth, Hanneman fused the boundaryless songwriting of hardcore punk with the riff-based narrative ideas of heavy metal, producing what became an important template for all metal to follow. Punk, by reducing music to modal strips which fit within a percussive framework instead of accentuating it, and metal, with its phrasal tendencies that required internal dialogue between the riffs, gave rise to a new language with the first four Slayer albums which were mostly composed by Hanneman.

His music also took on a different form because of its perspective on the modern world as exhibited in both sound and lyrics. In his eyes, modern life became not a struggle for technology and politics to dominate the beast within, but a mythological conflict between what humans desire is true and project upon the world and a hidden layer of realistic truth in denial of which humans — and human civilization — self-destruct.

For these innovations, and the spirit that caused them, many of us feel indebted to Hanneman and honored to celebrate his art:

Having someone like you to lay down a realistic but transcendentally imaginative view of the universe really helped. I will never forget, and I am certain I am not alone. You spent your days reprogramming the cosmos with fiendish guitar riffs and that has made all the difference. Even though we never knew each other, in a way, we were best of friends.

This second of May, celebrate Jeff Hanneman not only with his music, but by carrying forth his legacy of clear-sighted realism matched to transcendental mythology, in all that you do.